Lauren Greenfield’s 2012 documentary “The Queen Of Versailles” was in a sense a microcosmic portrait of everything that’s wrong with the world, and specifically with the perversion of what’s still called the American Dream. Greenfield, a superb photographer who began making film documentaries with 2006’s “THIN,” told the story of the Siegels—David, a timeshare millionaire and wife Jackie, a beauty pageant winner turned human cartoon character, and their quixotic quest to build the biggest domicile in the U.S., one modeled after, yes, Versailles. Their plans ran very much afoul of the 2008 financial crisis. If that had not happened, would the dream have been realized? Hard to say.

Greenfield’s new movie begins with Greenfield herself, discussing the beginnings of her career. Her first photojournalism assignment was to photograph a Mayan Indian village. She spent months there trying to acclimate herself, and then the story was killed. She realized, after reading Bret Easton Ellis’ Less Than Zero, that she had more vital interests closer to home. As the daughter of parents just under the upper-middle-class ceiling and attendee of an exclusive L.A. high school, Greenfield envied her more affluent friends. As a photographer, she sought out people who either had ridiculous wealth or who were striving to get something like it.

How, Greenfield wonders, did the old All-American values of “hard work, frugality, and discretion,” mutate into the endless pursuit of MORE that’s exemplified by figures such as Kim Kardashian and, yes, pre-presidential Donald Trump?

To find out, Greenfield interviews a raft load of figures—among them Ellis, who’s starting to look a little like Percy Helton, bless him, and contributes the apreçu “If you look great and have a nice car, I’m all for it, but at the expense of what?”—beginning with some of the now older and not always wiser subjects of her early-in-the-century photo books Girl Culture and Fast Forward. Their stories of unfettered teen years sometimes have predictable climaxes, others not so much. One woman recollects being from a lower income strata than her classmates but gaining acceptance through her attractiveness, and how the experience scarred her. A couple of the boys seen gawking at her in nearly 20-year-old photos turn out to still be knuckleheads, now with cigars.

Another cigar smoker is Florian Homm, an acquaintance of Greenfield’s from her time at Harvard. He is somewhat … well, repentant isn’t the word. The onetime multimillionaire hedge fund manager talks of his incredible rise, and the decadence of a lifestyle he no longer has, for reasons that are not unpeeled until later in the movie.

In the 105 minutes of the movie, Greenfield unspools a dizzying number of narratives, not all of them directly relating to monetary wealth as such. But it’s all connected, whether we’re hearing from a Midwest girl who travelled to Hollywood and became a porn star (the story of how she contracted salmonella is not one you’ll forget) or the bus driver from a Southern state who went to Brazil for radical plastic surgery she hoped would fix both herself and her relationship with her daughter. Greenfield increasingly interpolates her own life into the mix, wondering how her own workaholic tendencies—again, the pursuit of “more”—have damaged her family life. Her camera takes us literally around the world, reminding us that Russia and China, two countries that in the 20th century had revolutions intended to abolish class, are now the two biggest markets for luxury goods. Iceland fits into the puzzle too.

Journalist Chris Hedges chimes in periodically, evoking ancient Egypt and its pyramids to observe that “Societies accrue their greatest wealth at the moment they face death.” Saying that the rise and fall of nations is just part of history’s ebb and flow, he adds, “The difference is when we”—he means America, people—“go down, the rest of the world is coming with us.”

Which is a major bummer. But kind of hard to refute. Greenfield wraps up this compulsively watchable movie with observations of family love and some of its characters striving for redemption and/or an honest living. But she doesn’t quite dissolve the bitterness of the pill. Because it really can’t be. 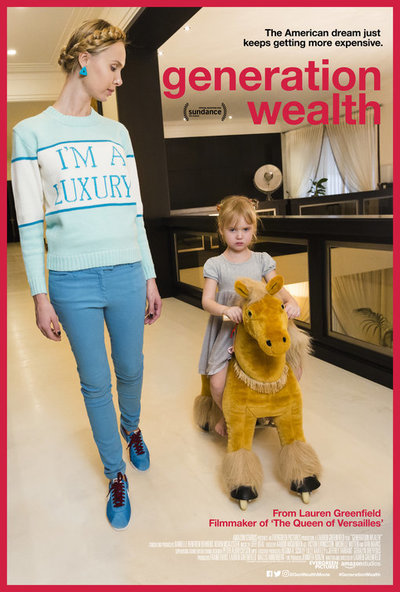 Florian Homm as Himself