In 1891, French painter Paul Gauguin, disgusted with European civilization, and the lack of appreciation for his work, set off for French Polynesia to get his groove back, as an artist and a man. He had enough of a reputation as a painter at the time that he auctioned off his work to pay for the trip. A month before his departure, he gave an interview for L'Écho de Paris, where he explained himself: "I am leaving in order to have peace and quiet, to be rid of the influence of civilization. I want only to do simple, very simple art, and to be able to do that, I have to immerse myself in virgin nature, see no one but savages, live their life, with no other thought in mind but to render, the way a child would, the concepts formed in my brain and to do this with the aid of nothing but the primitive means of art, the only means that are good and true." Jean-Jacques Rousseau couldn't have said it better. Gauguin left his wife and five children behind and set off into the unknown. This first journey (there would be more)—and the relationship Gauguin struck up with a local girl named Tehura—is the subject of French writer/director Edouard Deluc's feature "Gauguin: Voyage to Tahiti." The film is beautiful in spots, and features a believably tormented performance by Vincent Cassel as Gauguin, but unfortunately it has only a hazy idea of what it wants to be about.

Cassel, his beautiful face lined like a grimacing woodcut, staggers through the film as a man obsessed with his art to the exclusion of everything else. Gauguin had a host of physical ailments exacerbated by poverty, and Cassel often looks too weak to even stand. The opening sequences take place in Paris, showing the rejection of Gauguin's work in one overheard comment ("It looks like it was hacked out of a tree") from a potential rich buyer. We then see Gauguin talking with his buddies in a bohemian Paris bar where bare-breasted women cavort around with men. Gauguin is alienated by society and tells his friends he's going to Tahiti ("So who's with me?" he asks, a line making it slightly unbelievable that four screenwriters are credited). After a brief confrontation scene with his long-suffering wife (Pernille Bergendorff), Gauguin sets off for Tahiti.

During his wanderings through the lush landscape of Tahiti, he comes across a peaceful village, and is captivated by Tehura (17-year-old Tuhei Adams). Her parents ask her if she'd like to go live with him. She says, "I'd like that." (In Noa Noa, the travelogue he published in 1901, Gauguin—a famously unreliable narrator—said it didn't take much more than that.) His relationship with Tehura sparks the creative muse in him. Next thing you know, he's painting her through the days and long into the night, ignoring her even when she says she's hungry. Many of these paintings now grace the walls of the most famous museums in the world.

"Gauguin" would have been much stronger if it had acknowledged the queasy aspects of all of this upfront. One of the main issues is that, apparently, according to Gauguin, Tehura was 13 years old at the time of their relationship. If you're going to do a biopic of Gauguin, avoiding the reality of an easily Google-able fact feels a little shady, even factoring in Gauguin's propensity to embellish, or spin tales. Clearly it would have been a very different movie if the person playing Tehura had been 13 years old, and the movie probably couldn't have been made at all. Tehura was a huge part of Gauguin's "way in" to Tahitian culture, its beauty, its differentness from his own. He immortalized her in his painting "Merahi metua no Tehamana" (or: Tehamana Has Many Parents). In the painting, a woman wearing a blue and white striped dress, with white flowers in her hair, sits in a chair, holding a rose-pink fan. Mysterious Easter Island glyphs loom behind her, along the wall. The woman's smile is reminiscent of the Mona Lisa's, remote, keeping secrets. Adams is a fresh and natural actress, able to communicate her curiosity about Gauguin, her playfulness in posing for him, and—gradually—her dissatisfaction and sadness at being locked away from her own culture.

Thankfully, "Gauguin" does not attempt to make this a "great love story." The situation between them is always twisted. The best parts are when Gauguin is faced with his own parochialism, his unreasonable and blinkered need for Tahiti and Tahitians to be a certain way. He is disappointed when Tehura expresses a desire to get a white dress and go to church. He wants her bare-breasted and chewing on a mango with a flower in her hair. That's how he gets his inspiration for his work. There are so many interesting possibilities here about empire, colonization, cultural blindness, and paternalistic attitudes—but it all remains frustratingly opaque.

Dulac—and his cinematographer Pierre Cottereau—have shot the entire thing in shallow focus, with a conspicuous lack of establishing shots. There are only a few times when the camera gets far enough back to see the landscape, a strange choice since it is the landscape which launched Gauguin into new realms of color and mood. The focus is always close in on Gauguin's face, the surrounding landscape blurred out into green or blue. It keeps us so concentrated on Gauguin's experience it blots out the rest of the world.

"Gauguin" suffers from a problem common to biopics: it gets bogged down in the details of a life (while also skipping over unsavory parts of said life) and forgets to illuminate what really matters, why we should care in the first place: the work. What did Tahiti give Gauguin that he didn't have before? What was going on in the art world at the time that made his work so unacceptable? Gauguin's work was controversial then, and it remains controversial. His fame has been strictly posthumous, but his paintings inspired a generation, including Pablo Picasso. When Gauguin's friend, a doctor stationed in Tahiti (Malik Zidi) looks at the paintings of Tehura, he recites, dreamily, "She is a primitive Eve ... She is a Tahitian Venus." He's telling us how to interpret the work, why it is radical and new. He's telling us what to see. It's not enough. 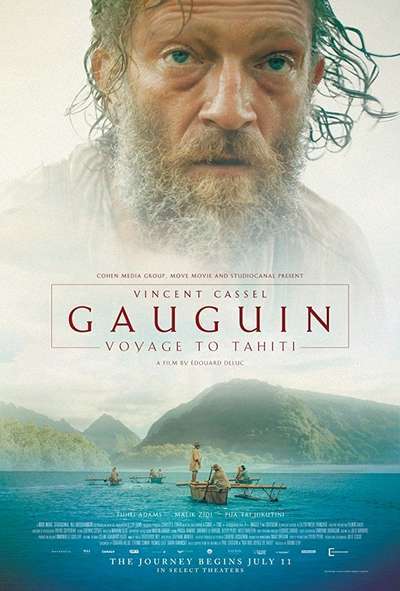