Cité Gagarine, a visually striking red and white, multi-building housing project outside Paris, France, is the setting for “Gagarine,” the fiction film debut of directors Fanny Liatard and Jérémy Trouilh. It is based on their 2015 short of the same name, which featured interviews with real-life inhabitants of the project. Some of those people appear here as well. Built in the early 1960s in the communist municipality of Ivry-sur-Seine, Cité Gagarine was named after cosmonaut Yuri Gagarin, the first man in space. As the film opens, we see him in archival footage making the trip to the site’s June, 1963 inauguration.

When the directors filmed their short, the projects were scheduled to be demolished. This feature was made just before that final act, constituting some of the last known footage of the location. “Gagarine” plays like a mournful lament for a community that banded together during hard times before being separated and scattered to the winds, leaving no trace of its communal existence behind. The camaraderie between the characters is so strong and effective that Liatard and Trouilh’s occasional forays into magical realism feel intrusive and forced; they want to launch us into outer space when we would rather just stay on the ground.

That astronaut-fueled fantasy comes courtesy of Youri (Alséni Bathily), a young man who wants to follow in his namesake’s footsteps. Youri is a loner of sorts, but he’s also most passionate about trying to keep Cité Gagarine from the wrecking ball. He figures that if he can keep the building from falling too deeply into disrepair, the government won’t tear it down. So he brokers deals for lighting fixtures and attempts to repair the broken elevators and shutters using his own mechanical knowledge. His best friend Houssam (Jamil McCraven) puts him in contact with an equally mechanically inclined adolescent Roma girl named Diana (Lyna Khoudri), who can get them supplies (and advise them on their electrical work). She and Youri share a love of Morse Code and eventually gravitate toward each other in a sweet, romantic fashion.

Youri pays for his necessary supplies using his mother’s jewelry. She has deserted him, leaving him in their projects apartment while she lives elsewhere with a lover who doesn’t want Youri around. The screenplay’s treatment of this development is hollow at best, but it does provide an entry point for the symbolism that gets thrust upon Youri. He’s the beating heart of Cité Gagarine, a loner who figuratively adopts it so that he may care for the way he wishes he were cared for by his missing parent. The community at large becomes his extended family for a time, only to have them leave when the wrecking ball draws nearer. With no place to go, Youri decides to stay in his apartment to keep demolition at bay.

“Gagarine” never tries to sugarcoat its issues, but it also does not wallow in any of the miseries its mostly immigrant and poor characters face. There is joy to be had here, as in the scene of the neighborhood watching an eclipse with bated breath, or the scene where real-life residents dance on the rooftops. Alternatively, there’s also a building inspector who callously walks through one of the buildings while ignoring the complaints of tenants with dangerous maintenance issues. Houssam’s dad is particularly vocal about how much of a deathtrap his apartment is, leading to an act of desperation that seals the fate of the entire community.

Brief fantasy sequences are interspersed throughout “Gagarine,” featuring Youri bathed in a red light while wearing spaceman’s gear. As the demolition of Cité Gagarine grows closer, these scenes become more frequent. They are well done, and the moment when the building seems to flash out “SOS” in Morse code has a moving and undeniable power. But more often than not, they feel like they’re robbing the film of a deeper, more spiritual tie to the human interactions the actors perform so vividly. I would rather have more scenes like the one where Youri, Diana, and their former neighbor Dali (Finnegan Oldfield) dance in a deserted area of the building that has been turned into a model of a space station, for it proved that the film’s realism was magical enough without embellishment. Despite those reservations, “Gagarine” is still worth recommending. 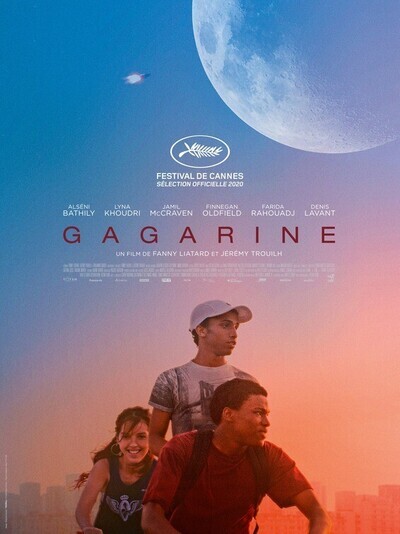