Pro tip: If you’re trying to find a way to tell the estranged daughter who is still furious because you left her mother for a young airhead that said airhead is pregnant with your estranged daughter’s soon-to-be half sibling, it probably will not help to have sex with her fiancée. And yet, we have “Funny Story,” where Walter Campbell (Matthew Glave) is right in the middle of that exact quagmire. Your appreciation for this film will depend in large part on where this all falls on your personal continuum from “funny” to “funny-ish,” to “ewww.”

Walter, the onetime star of a cheesy but fondly remembered fantasy television series called “Youngblood,” tries to break up with the airhead, explaining that she is interested only in “fashion, reality television, and your phone,” while he is interested in ... "everything else." She pauses in posing for a selfie to inform him that she is pregnant. He hoped to tell his daughter Nic (Jana Winternitz) when she came to visit, but she cancels, so he invites himself to Big Sur, where she is staying with some friends. He knows she will be hurt and angry and so he wants to tell her in person.

One of the friends meeting Nic in Big Sur is Kim (Emily Bett Rickards), but her car died and she needs a lift. Walter, eager to be accommodating, agrees. We already know Kim is troubled—and trouble. Walter just knows she is hostile. She has a nose ring and an attitude and, as he puts it, “For someone so small, you wear a huge layer of ‘bitch.'”

What he does not know is that his daughter is a lesbian, and plans to marry Kim in Big Sur. That is not an excuse for his cheating on the woman who is pregnant with his child after he left the mother of his other child for her. And it is not an excuse for taking advantage of a woman who is, as James Stewart memorably described it in “The Philadelphia Story,” “the worse, or the better for wine, and there are rules about that.” Walter is apparently unfamiliar with those rules, or some others. Kim made the first move, but he is twice her age and, at the least, the father of her friend.

The rest of the film is all about who will find out what when, in the midst of some spectacular Big Sur scenery and some unoriginal attempts at humor about the old-school cheesiness of Walter’s television show, the plankton-like earthiness of the lesbians’ cooking, and the pansexual seductiveness of yet another character who thinks Walter would be a treat in the sack.

Glave is so immensely appealing in the role he almost makes Walter seem sympathetic, especially singing “Unchained Melody” and good-naturedly showing off his “Youngblood” character’s special dragon call, and when we see just how much he wants to repair his relationship with Nic. But the script calls on him to find consistency in some variable behavior, including some strange ignorance about lesbian relationships and appropriate questions. It is also difficult to reconcile Nic’s devotion to her fiancee given what we have seen about Kim's choices and lack of stability.

A great deal could be made of this set of characters, of Walter’s conflicts over his one achievement as an actor, of Kim’s mysterious letter from her late mother, of Nic’s attempt to find some sense of security following the break-up of her parents’ marriage, of the way that people who say, “No judgment!” when inviting a comment or question never, ever mean it. Telling the story from Nic’s perspective might also make more sense. Instead co-writer/director Michael J. Gallagher relies on the audience to sympathize with Walter to provide some depth to the sillier parts of the story, and that left me closer to the “funny-ish” side of my own scale of, well, judgment. 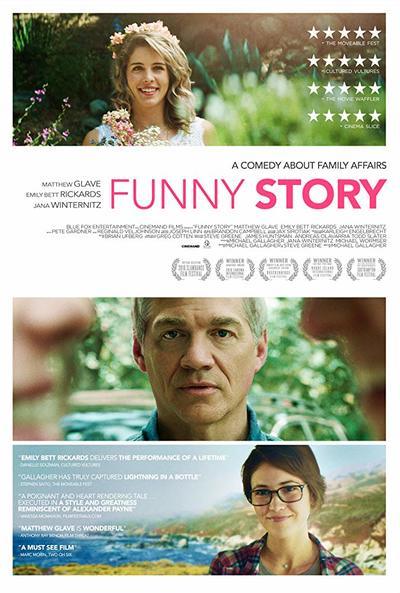