A skillfully written and acted gay love story about two young men of Chinese ancestry, Ray Yeung’s “Front Cover” has a title that evokes the differences in its main characters. Ryan (Jake Choi), a New York fashion stylist, aims his energies toward the front covers of magazines. Ning (James Chen), a movie star from China, also projects himself into the public eye, but uses his image as something else—a cover for his real self.

The film begins by immersing us in Jake’s world, where openly gay men are the rule rather than the exception. He works hard styling models for photo shoots, and though he seems to be climbing the career ladder adroitly, it’s clear he’s not completely established yet: one misstep and he could go hurtling downward again.

That’s why every job is a challenge, and the assignment to style Ning, an Asian star hoping to break into the American market, is particularly tricky. Ning’s handler tells Ryan that Ning has already fired one stylist, and now he definitely wants one with a Chinese background. But Ryan obviously doesn’t consider himself particularly Chinese, and when he meets Ning for the first time in a Chinatown restaurant, the situation seems designed to thwart rather than establish communication: the star has brought a boisterous, obsequious entourage with him and forces endless amounts of food on everyone.

The entourage creates an immediate barrier the next time the two meet, forcing Ryan to say that he can only work with the star if they can interact one-on-one. Ning gives way on that front, but soon has his own objection: he doesn’t like that Ryan is so open about his “homo side.”

This is not only a clash of personalities but of cultures as well. Ning looks askance at gay men holding hands on the street, something evidently still less common in Beijing than in New York. Yet Ning has reasons—ones perhaps going beyond strictly career concerns—for adapting to this environment, at least temporarily, so he gradually accommodates himself to Ryan and his milieu.

Yet it’s Ryan who’s in for the biggest changes. His life seems to be consumed by obsessive work and desultory socializing. Though he’s attractive, there’s no mention of past boyfriends or romances in his life; he evidently contents himself with Internet hookups. A self-described “potato queen” (an Asian gay man attracted to white men), he has a sexual identity that obviously connects with other issues, especially his unadmitted discomfort with his Chinese roots.

The strictly professional relationship between the two men verges toward friendship due to complications that involve race and cultural identity. In one highly charged scene, a bullying, Bruce Weber-like photographer casts racial aspersions at both Asians, which unites them in indignant fury even as it upends their most important shoot.

Then there’s the day Ning accompanies Ryan and his parents (Elizabeth Sung and Ming Lee) on a day trip to Staten Island, an outing that draws the two young men together in unexpected ways. Though Ryan tries to project an “everything’s cool” demeanor, and says his parents accepted his sexuality long ago, it’s clear that they’re trying their best to be supportive while never being entirely comfortable with his orientation. But they’d never seen their son with a Chinese guy, and mistaking Ning for a romantic interest, they’re happy that he’s at least not spurning his heritage. For his part, Ning takes bemused pleasure in play-acting the role of the new boyfriend.

The transition from distrust to wary friendship to something more passionate in a movie like this depends a lot on the writing, and Yeung’s is subtle and assured, tracing an emotional arc that’s believably nuanced. It also benefits from exceptionally strong lead performances. As Ning, Chen has no trouble summoning a star’s charisma while also suggesting his hidden side. And Choi’s Ryan, a terrific debut, gives us a young man of real complexity who’s in the throes of self-discovery and (apparently) first love.

While the film adheres to the conventions of romantic melodramas in a way that guarantees the two characters will end up in each other’s arms, its fascinations from a cultural perspective remain strong throughout. If it can be said that every cross-cultural story like this eventually tilts toward one culture over the other, one thing that’s notable about “Front Cover”—and that sets it apart from Ang Lee’s nominally similar “The Wedding Banquet”—is that, though set in New York, its perspective and espoused values are finally more Chinese than American. If that’s surprising, it’s in keeping with the emotional journey of a young man learning that identity is not only about sexuality. 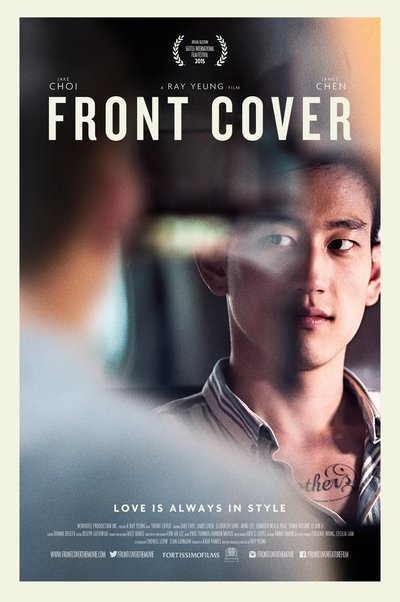