“Fried Barry” wants to look at the world from the inside of a kicked-over garbage can. That's a noble idea, given that you usually don’t get people studies mixed with Midnight movie muck, which includes all of the gore, chewed up hot dogs, and heroin needles with which you can accompany a droning synth score. But viewers with either interest, of getting dirty or getting mindful, will be short-changed. Same too for anyone who gets the vibe of Jonathan Glazer "Under the Skin," which also was about an alien interacting with humans often at their most primal. Here's the dude version of that movie, and the dumb one.

Before he's abducted by aliens, we get to know a few things about Barry (Gary Green). He’s a heroin addict who stalks the streets, orbited by a crowd of fellow drug users and other grimy ilk. Barry also has a home life, with an angry wife and the son he neglects, a typical picture of a man whose life is chaos whatever apartment he’s in. He flees to a local watering hole, and listens as a bar buddy makes a long-winded monologue about Disney characters and their gloves. Then they get very high. Green's body is shown diving into a blue pool to show that experience, but the image is then contrasted by seeing his body being lifted into the sky by a harsh red light. It's one of the few interesting moments from the style that director Ryan Kruger invests in more than narrative.

Barry, or the alien controlling now Barry, is dropped off into the nightlife of the Cape Town, which is full of people who forcefully interact with him as if magnetized to him, in a screenwriting conceit that Kruger’s story just goes with. He wanders into nightclub and a woman comes up to him and gives him a pill; he later meets a woman who really, really wants to have sex so she takes him home and does so, even though she has to demand that this affectless lug makes a sound. Passive Barry is bug-eyed throughout much of these interactions where people talk at him or give him things, or sometimes beat him up. And when someone ups and puts drugs into Barry’s body, which is often, Green's performance breaks from being all locked arms and resembles more of a wacky flailing inflatable tube man. Green has the reckless abandon that makes for unhinged performances, but "Fried Barry" can't decide if he's a joke, or a zonked-out Christ figure.

Scenario by scenario, Kruger's film becomes a formless odyssey spiked with mini performances that aren’t supported by writers James C. Williamson and Kruger with any grandiose subtext, or to even feel any more than thin caricatures of behavior. Everyone is allowed to let loose here, which adds to an exaggerated comedic tone (like the supermarket worker who gets super suggestive when she sees Barry at the checkout) but approximately nothing revealing about the kaleidoscope of humanity that shares screen time with Barry. People can be horny, drugged out, frightened, volatile. Even when the behavior is recognizable, "Fried Barry" never muses more than the obvious.

Later on, some people do control the movie's attention span for longer passages, like when Barry is captured by a dystopian-ready maniac in a sequence that includes a desolate warehouse and ends with a struggle with a chainsaw, or another rant that climaxes with a breakout from a mental institution. The monologues here delivered at Barry are bonafide padding for the run-time, and it's always more about writer/director Kruger than anything else. In these mini audition pieces, the debut director ramps up and then shows off his taste for chaos, with meticulously trashed locations, frantic editing, and topsy-turvy cinematography that often goes for a close-up of Green, searching for a conscience that isn't there. The emotional connection, the one that would really prove Kruger’s cohesive talents, is a complete non-factor.

Whether "Fried Barry" means it or not, Barry becomes an embodiment of the movie, purposefully empty-headed but with striking external features, sauntering from one part to the next. But for all of its characters, its insistent narrative energy, and hopes of gutter commentary, "Fried Barry" feels like it's stuck, and hasn't gotten anywhere. Its aspirations of being a thoughtful acid trip become a lost cause. 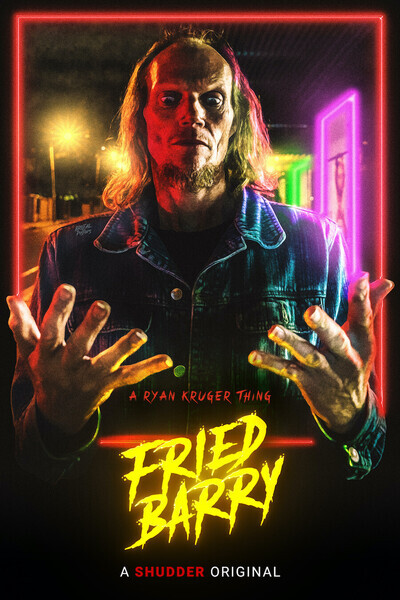 Joey Cramer as Self