To not be uncomfortable with our history as Americans is to be in denial of it. Censoring the atrocities in our collective past so as not to disturb students and their parents does nothing more than breed the sort of ignorance that fuels present and future horrors. This truth is bracingly conveyed by “Frederick Douglass: In Five Speeches,” a documentary from director Julia Marchesi and producer Oluwaseun Babalola that plays not like a dry history lesson, but an urgent bulletin from the past which speaks to our present moment. Douglass is unquestionably one of our nation’s towering figures most sorely deserving of multiple films made about his life, and by zeroing in on five of his most impactful speeches, Marchesi and Babalola build an awe-inspiring portrait of how the trailblazing abolitionist was not only as great an orator as Abraham Lincoln, but a true champion of equality whose words continue to resonate throughout the ages.

With its running time clocking in at a mere hour, the film may seem at first glance like a TV special designed to air during Black History Month, yet its style is unmistakably cinematic. Six of the finest actors working today are tasked with reading Douglass’ words, which are occasionally accompanied by gorgeous animation resembling murals in motion. Whereas the other performers are each assigned a particular speech, André Holland breathes life into excerpts from Douglass’ autobiographies, examinations of America from the perspective of a formerly enslaved person that should be required reading in every U.S. classroom. Key among the film’s array of historians are David Blight, whose Pulitzer Prize-winning biography, Frederick Douglass: Prophet of Freedom, inspired the picture, and executive producer Henry Louis Gates, Jr., the wonderful host of “Finding Your Roots” and 2009’s documentary “Looking for Lincoln,” the latter of which would make a fitting double bill with this one. My dad, who also happens to be a lifelong Lincoln scholar, has always credited Douglass as “Lincoln’s conscience,” and indeed, Gates notes how the sixteenth president’s maturing view of Black people was formed in great part by the tireless agitator he welcomed into the White House.

Though Douglass’ astonishing life story is worthy of an expansive miniseries, this film has only the time to whittle it down to a handful of enticing bullet points. Born around 1818, Douglass believes it was “divine providence” that eventually sent him from the plantation in Chesapeake Bay where he grew up to his role as the servant of his master’s family in Baltimore. It was there that the slaveholder’s wife, Sophia Auld, taught Douglass how to read—not realizing it was illegal—until her husband reprimanded her, stating that such education would make him “unmanageable.” After making an escape that would be worthy of a film in itself, Douglass settled in Massachusetts, and was asked by white abolitionist William Lloyd Garrison to deliver his first speech, 1841’s “I Have Come To Tell You Something About Slavery.” Denzel Whitaker, who was unforgettable in 2007’s “The Great Debaters,” brings fierce intensity to these words, as Douglass overcomes his initial embarrassment at addressing an audience of white people to convey how no one can illustrate the evils of slavery like those who have actually “suffered under the lash.” Douglass would go on to become one of the most photographed men of the 19th century, and the brilliant artist Bisa Butler, who created her own quilted portrait of the man, observes how his choice to look directly at us “is a challenge and a provocation in itself.”

That is precisely what the actors often do here, though perhaps no more indelibly than Jonathan Majors, who embodies the rage felt by Douglass after having witnessed how Blacks were treated like human beings in other countries while traveling abroad. Majors likens Douglass’ description of slavery in the 1847 speech, “Country, Conscience, And The Anti-Slavery Cause,” where he describes it as a method of destroying Blacks by “crushing them to the earth,” to the on-camera lynching of George Floyd. Yet the actor who comes closest to channeling Douglass in every impeccably nuanced syllable is Nicole Beharie, who is tasked with tackling 1852’s “What to the Slave is the Fourth of July?”, dubbed by Gates as “the oratorical masterpiece of the abolitionist movement.” Though her spellbinding performance is juxtaposed with Blight breaking down the three movements of the speech, Beharie needs no assistance in illuminating the mastery of Douglass’ impassioned call to action, while never having to raise her voice in order to chill our blood. She isn’t reciting his text so much as becoming it.

It’s deeply moving to hear Douglass defend the honor of Black soldiers in his 1863 speech, “The Proclamation And a Negro Army,” read by Colman Domingo, while his final speech, 1894’s “Lessons of the Hour,” lays out the crucial steps toward achieving equality that have yet to be followed today. The actor selected to read these words is Jeffrey Wright, whom I have long envisioned to play Douglass and will soon be narrating the Apple TV+ miniseries, “Lincoln’s Dilemma,” which promises to explore the particulars of the abolitionist’s relationship with the revered yet undeniably flawed president. “The more human we make our heroes,” Gates reminds us, “the more noble they become.” “Frederick Douglass: In Five Speeches” succeeds as an enormously enticing introduction to the life of one of the greatest and most important of all Americans, and it leaves us wanting so much more, namely several full-length films about Douglass and other Black abolitionists. Only briefly does the film touch upon Douglass’ personal life, particularly his devoted and long-suffering wife of 44 years, Anna, whom he failed to include in his writing. There’s also glimmers of complexity in Garrison and the other white abolitionists, who ordered Douglass to “put more plantation” in his voice so that he wouldn’t “sound as white,” prompting him to pen his first eloquent autobiography.

After each speech in the film is delivered, the actor has an opportunity to step out of character and reflect on the startling timeliness of Douglass’ insights. Domingo says that he can’t imagine a better time to put Douglass’ words on a stage than right now, as we are finding ourselves once again “interrogating the soul of America.” Douglass may have died well over a century ago, but he remains our collective conscience, urging us to become the nation we never were and we must strive toward making a reality nevertheless. 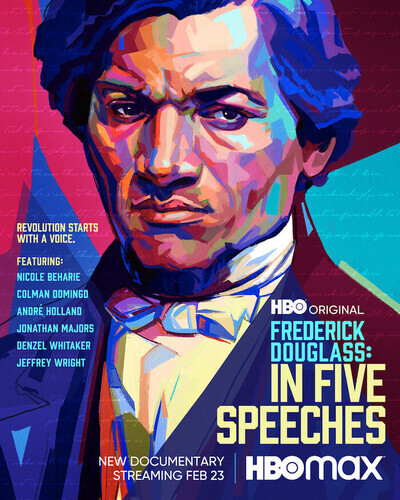 Nicole Beharie as Self

Colman Domingo as Self

Jonathan Majors as Self

Denzel Whitaker as Self

Jeffrey Wright as Self

David Blight as Self

Henry Louis Gates, Jr. as Self

Bisa Butler as Self