Writer/director Bruno Dumont (“Outside Satan,” “Joan of Arc”) can’t get enough of France, because she only thinks that she’s mastered a personality-driven system of faux-populist reporting that she’s really internalized and thus accepted at face value. Seydoux’s character struggles to change her self-image after she accidentally strikes a motorcyclist with her car. But France was probably already doomed by the time we met her.

Dumont’s interest in France is generally more ambiguous than it is strictly critical, but he also doesn’t seem to care enough about Seydoux’s character to actively develop her. He seems to like the idea of France more than anything particular about her.

In the opening scenes in “France,” Dumont throws a kitchen sink’s worth of contempt at Seydoux’s anti-heroine, a self-absorbed media personality who interviews political pundits and also inserts herself into human interest stories on her popular TV news program. At a press conference, France brazenly asks one politician, regarding the “insurrectional state of France,” if he’s just “heedless or powerless.” He responds to her question with undue deference, as if her celebrity status demanded his serious consideration. France and her yes-woman producer Lou (Blanche Gardin) exchange immodest—and proudly vulgar—gestures to each other, like school kids passing notes to each other without fear of being punished.

Dumont continues to sneer at France and her protective social/professional bubble by following her first at work, then at home. At work, France evades aggressive pundits with the same ease and speed that she directs and develops on-the-spot interview segments so that they can be cut and packaged for her TV program. At home, France dotes on her son Jo (Gaëtan Amiel) and avoids her jealous husband Fredric (Benjamin Biolay). These two equally loveless worlds inevitably collide in a series of tiresome episodes that only reveal how delusional France is for having ever thought that she is as special as she is media-savvy.

France is so regularly approached for on-the-spot selfies and autographs that she inevitably gets reeled in by two men who don’t seem interested in her fame. There’s Charles Castro (Emanuele Arioli), a Latin scholar and would-be suitor whose motives are so obvious that he’s ultimately a lot funnier as a running joke (he just won’t go away!) than as a supporting character (but maybe he really loves her!). And then there’s Baptiste (Jawad Zemmar), the above-mentioned motorcyclist who becomes an uneasy object for France’s charity (his parents can’t work, and he must provide for them!).

Over and over, Dumont reminds us of how little he thinks of France. Her cardinal sin isn’t that she’s too good at her job, though that also makes her an obvious target for our contempt. What really makes France a typical Dumont martyr is that she has no clue what really makes her job—and the unnaturally un-nuanced, demeaning point-of-view that it confirms—so contemptible: that the media has made us accept that it’s normal to see the world in simplistic, soundbite-friendly terms. France is a product of that system, and she’ll ultimately never really change, because again, she has no clue how to cope. Rather, she’ll keep unwittingly demeaning her interview subjects and insulting her audience just because she’s never really jarred out of her circle of influence, not matter how many personal and public crises threaten France. Alan Partridge, she ain’t.

As usual, Dumont is a more interesting director than screenwriter, especially when he blocks and holds a shot long enough to suggest that there’s a lot more going on than his ignoble on-screen characters could possibly say, let alone be aware of. Then again: spending so much time with France, a consistently hollow character, is often exhausting.

France’s inner life and qualities are only hinted at by Seydoux’s typically sensitive performance. Because every time France almost sees a potentially unpleasant side of herself, she’s sidetracked by airhead enablers that keep her self-conscious, but unaware. In a later scene, Lou tries to comfort France by telling her that she’s an “icon,” and icons are “made of mud.” That’s the solipsistic point that Dumont makes France circle around throughout “France,” and with negligible variation. In theory, that sort of self-victimization could be funny; in this reality, not so much. 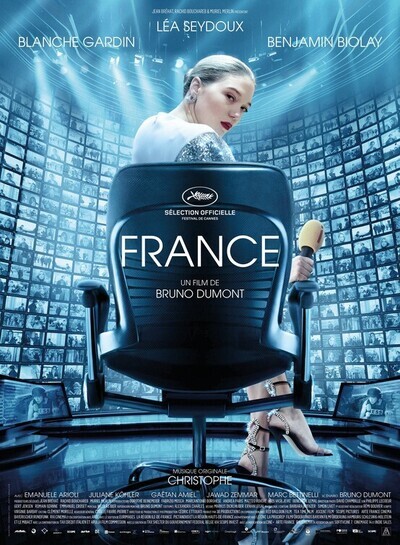