An anti-war movie like Lewis Milestone’s “All Quiet On The Western Front” or Terrence Malick’s “The Thin Red Line” is made great by the humanism at the center. These films put the soldiers, their lives and their souls, above the battle sequences or patriotic sentiment. “Foxhole,” written and directed by Jack Fessenden, aims for such heights. Working with a small cast playing characters of the same name in three wars spread over three different centuries—the American Civil War, World War I, and the Iraq War—Fessenden wrestles with themes of duty, honor, and most importantly empathy.

Bookending his film with shots of a field filled with bloodied, dead soldiers, Fessenden immediately instills a sense of the futility of war. “The privilege of service seems to wither as each battle passes and what remains in the soul is not the glory of combat, but the horror of its aftermath,” a voiceover echoes in the fog. It’s through this poetic Malick-esque dialogue that his characters show how individual humanity and goodness can endure even in the middle of no man’s land.

We first meet his core cast in the middle of the American Civil War, where Jackson (Motell Gyn Foster), a Black soldier, is wounded in hand-to-hand combat with a Confederate soldier (Asa Spurlock). After killing him, Jackson makes his way to a foxhole being dug by fellow Union soldiers Clark (Cody Kostro), Conrad (Angus O'Brien), Morton (Alex Hurt), and Wilson (James LeGros). The soldiers then debate whether their duty is to continue digging or to take the wounded Jackson by stretcher to the closest medics.

Here Fessenden imbues his film with an added layer of social consciousness. One soldier dares to ask Jackson if he were “free” before he signed up, calls him the n-word, and debates with the others as to whether it is their duty to keep digging or to help this one, Black man. To have a Union soldier be this overtly racist subverts the myth that all soldiers fighting on the Union side of the American Civil War were abolitionists. This exploration of how Jackson’s race affects his place within the military becomes a throughline into the next two segments.

A smash cut to the WWI segment sees a young German soldier drop into the group’s trench, where they now debate whether they should kill him or if he is just a “scared boy running from his fate” like the rest of them. Here Jackson’s autonomy is questioned again. When asked what he’s fighting for he responds, “Same thing as you ... democracy.” While the dialogue is a bit on the nose, Motell Gyn Foster sells it with raw authenticity.

His dynamic in the group changes again in the final sequence. Now stranded in a Humvee somewhere in Iraq, Jackson is their leader and their group is joined by a female soldier, Gale (Andi Matichak). Here Jackson sheds the calculated timidity of his earlier characters, embracing his charisma as a born leader. While all the actors involved tackle the wordy script with aplomb, especially indie-staple James LeGros who always brings a marked gravitas to any role no matter the size, Foster is given the meatiest role and proves a steady anchor for Fessenden’s weighty aspirations. That said, the film’s exploration of race and sex within the military is mostly surface-level, without much insight beyond representation matters style insight.

Mostly filmed in the Hudson Valley, “Foxhole” overcomes its limited budget and limited locations through Collin Brazie's exquisite cinematography, which utilizes different lenses for each sequence to give them a distinct visual language. Heavy fog is used for the American Civil War segment, obfuscating their vision and adding a foreboding tone. The WWI trench is surrounded by a pitch black sky and shot in an ominous monochrome color grade reminiscent of G.W. Pabst’s harrowing “Westfront 1918.” During the Iraq segment blinding sun obscures everything outside their stranded Humvee. The similarities of the soldiers’ existential experience regardless of which war they're fighting is made all the more clear by creating such stark differences in the visuals of each war.

Fessenden’s tripartite chamber piece “Foxhole” has its heart in the right place and wears its influences unabashedly on its sleeve. While it doesn’t quite live up to its grand ambitions, it’s refreshing to see a movie so beautifully and sleekly filmed attempt to wrestle with humanity’s deeper questions. "Foxhole" might not be in the top tier of the great anti-war film canon, but it's not too far away. 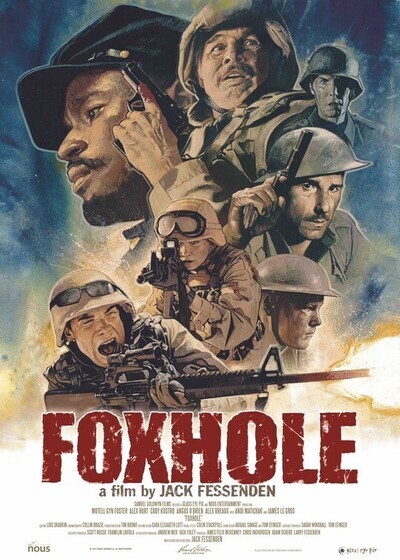 Alex Breaux as The German