God help us if many American teen-agers are like the ones in this movie but God love them, for that matter, for surviving in the teen-age subculture of Los Angeles. “Foxes” is a movie about four teen-age girls who live in the San Fernando Valley, who come from broken or unhappy homes, who are surrounded by a teen-age subculture of sex, dope, booze, and rock and roll ... and who aren't bad kids, not really.

They run in a pack, sleeping over at each other's homes, going to school together, hanging out together, forming a substitute family because home doesn't provide a traditional one. They form the fierce loyalties that all teen-agers depend upon loyalties of friendship that run deeper than the instant romances and sudden crushes that are a dime a dozen. They live in a world where sixteen-year-old kids are somehow expected to live in adult society, make decisions about adult vices, and yet not be adult. That's what's scariest about “Foxes”: Our knowledge that alcohol, pot, and pills are available to teen-agers unwise enough to go looking for them, and that they can provide emotional overloads far beyond the ability of the kids to cope.

One of the kids in the movie does cope fairly well, though. She's Jeanie, played by Jodie Foster as a sort of teen-age mother hen, a young girl who's got problems of her own but is intelligent, balanced, and enough of a survivor to clearly see the mistakes the others are making. That doesn't mean she rejects her friends. She runs with the pack and she takes her chances, but she’s not clearly doomed. And some of the others are.

The movie follows its four foxes through several days and several adventures. It's a loosely structured film, deliberately episodic to suggest the shapeless form of these teen-agers' typical days and nights. Things happen on impulse. Stuff comes up. Kids stay out all night, or run away, or get drunk, or get involved in what's supposed to be a civilized dinner party until it's crashed by a mob of greasers.

The subject of the movie is the way these events are seen so very differently by the kids and their parents. And at the heart of the movie is one particular, wonderful, and complicated parent-child relationship, between Jodie Foster and Sally Kellerman. They only have a few extended scenes together, but the material is written and acted with such sensitivity that we really understand the relationship. And we understand Kellerman, as an attractive woman in her thirties, divorced from a rock promoter, who is trying to raise a sixteen-year-old, attend college, and still have a love life of her own. Kellerman has a line that evokes whole lives, when she talks about "all those desperately lonely, divorced UCLA undergraduates."

The parallels here are obvious. The Kellerman character, we suspect, got swept up in the rock and drug subculture, got married too young, got pregnant immediately, and now, the mother of a sixteen-year-old, is still in the process of growing up herself. She doesn't want her kid to go through what she went through. But kids grow up so fast these days that, oddly enough, these two women are almost in the same boat.

“Foxes” is an ambitious movie, not an exploitation picture. It's a lot more serious, for example, than the hit “Little Darlings.” It contains the sounds and rhythms of real teen-age lives; it was written and directed after a lot of research, and is acted by kids who are to one degree or another playing themselves. The movie's a rare attempt to provide a portrait of the way teen-agers really do live today in some suburban cultures. 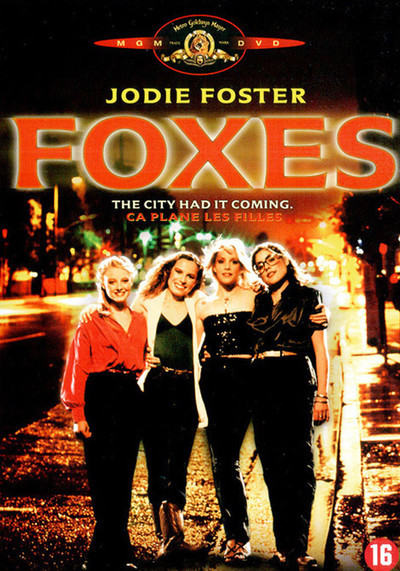