Fox and His Friends

At the delicate art of combining the bizarre and the mundane, nobody is more skillful than Rainer Werner Fassbinder. His formula is wickedly simple. He begins, often enough, with elements of lurid sexuality. Then he films against type, looking for deliberately banal characters and locations. And then, in a stylistic double-reverse, he photographs his banal subjects with a highly mannered artificiality.

The results are uneven, but then anyone who made some 33 films before he died at 36 can be excused for a certain inconsistency. What's important is that when everything's working. Fassbinder produces work that's hauntingly poignant.

That was true of his best film. "Ali -- Fear Eats the Soul,"  which explored the consequences of a marriage between a 60ish Polish maid and a 30ish Moroccan laborer. It was true, too, of "The Bitter Tears of Petra Von Kant," with its doomed lesbian triangle, and "Jail Bait," with its chubby 13-year-old vixen, and "The Merchant of the Four Seasons," with its alcoholic fruit peddler.

And it's especially true of "Fox and His Friends." Fassbinder himself takes the leading role, playing a naive and slightly dense young working-class man who wins the state lottery and soon finds himself -- and his lottery winnings -- embraced in Munich's gay circles. The slightly dazed young hero is adopted by the superficially charming son of a rich industrialist. But then things grow complicated. The industrialist, we learn, is about to go bankrupt. The son hopes to save the business. One solution might be to swindle the easily flattered lottery winner out of his fortune -- using love as a pretext.

Fassbinder is a specialist at scenes in which the unspeakable is spoken, the unthinkable is thought, the undoable is done with a vengeance. All three of those elements come into play in the film's best scenes, including a brilliantly complex dinner scene. The industrialist's son brings his new lover home to meet his parents, and it becomes chillingly clear that sex is not the issue with this family; money is. The relentlessly upper-middle-class parents and their gay son are, in fact, engaging in a form of tacit prostitution, trading the fashionable facade of their lives for the money they desperately need.

Fox moves in and out of the gay demimonde: Its bars with American rock and roll on the juke box, its parties, its intrigues. And the film's buried content gradually becomes clear. Fox is a victim of the capitalist society that so suddenly made him rich, deceived by "friendships" he doesn't even realize he's paying for. There's an especially poignant scene in which his lover shows him the expensively furnished apartment he's decorated for "them," with Fox's money.

The point of the movie's title is, of course, that Fox has no friends. Years before Hollywood made its first faltering steps in the direction of a new frankness about homosexuality, Fassbinder was miles out in front. He was so comfortable with gay characters that he felt no hesitation in portraying some of them as selfish, brutal and grasping -- as evil, indeed, as heterosexuals in other movies. Here is a movie about characters who define themselves by their sexuality, but the movie doesn't. It takes the sexuality as a given, and defines them by their values and morals. And in the sad, slow descent of Fox, Fassbinder indicts their materialism and narcissism. It was a neat trick, how often he was about to begin with the materials of soap opera, and expand them into an indictment of society. 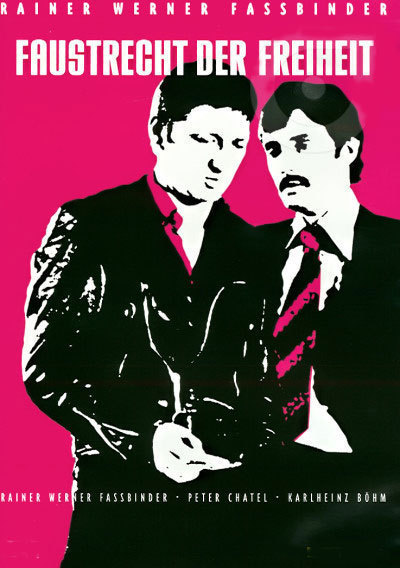