Dan Sallitt’s “Fourteen” is the tedious story of Jo and Mara, two New York City friends who have grown together since being teenagers. But the film presents the two when social worker Jo (Norma Kuhling) is at the start of a too-obvious decline, suffering from an undiagnosed mental illness, and not receiving help from the bad influences (boyfriends) in her life. Her best lifeline is Mara, who works with adolescents and wants to be a writer—she often pops over to Jo's place after a crisis, acting as a type of Jo whisperer. She knows where Jo has been, even if the movie makes it clear with its few truly interesting ideas that no one has any idea just where Jo will go.

You can see the significance they have to each other, and what the movie wants to do—this is a life-shaping friendship, and now it is slowly dying, each time we check in with them. But it's not nearly as compelling as it could be, despite its talented performers and an allegiance to being as sleepy as a Sunday afternoon. "Fourteen" simply runs too bland to have that vital sense of curiosity that comes from watching a movie where people talk about seemingly superfluous memories and interactions.

There’s something out of tune with the line-readings in this movie, even if the performances are clearly meant to start with a monotone in unison. Sometimes it’s simply about being in their living rooms as they hang out with their boyfriends, who all seem to have the same dry infection, and are so impossibly, meaninglessly dull. The worst comes with the film's phone call scenes, which seem to highlight the stagey dialogue. You’re supposed to see a slice of life, but all you can see are the rehearsals.

The effect is as distancing as the wide exterior shots it bookends certain passages with, the quieter moments of “Fourteen” that hope we can find something out of staring at a train station or a house for 30 seconds. For an indie that dreams of being naturally immersive, using long takes and limited coverage for scenes that take place in sparse New York apartments, it only makes you more aware of its artifice.

It’s a shame then, because these two leads are clearly able to build characters, and jump between a range of sensibilities. But the film doesn’t give them the proper space, even if it gives them still shots to walk in and out of, or enough of a frame’s space so we can see their distraught faces and crumpled body language. When the two each hit a breaking point, the bursts of emotion feel abrupt, all the more frustrating because of their emotional context.

The most interesting idea that “Fourteen” has is the passage of the time, in which each sequence jumps ahead at a distance you must then figure out. It’s a lot like life, in that you can chart the lives of Jo and Mara by their respective relationships, or by their dreams. But then time gets away, and the passage can be as long as two years. “Fourteen” doesn’t make a big deal about how far things have come for Jo and Mara only until the very end, but it doesn’t seem to make a big deal about anything, really.

Available on VOD and at virtual cinemas today, 5/15. 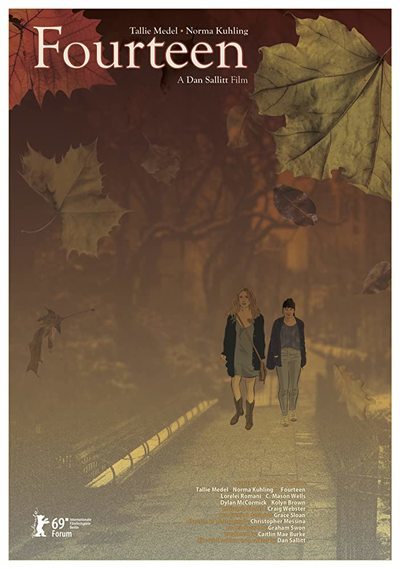