Tragic circumstances lead to recalibration of words we can take for granted. Normally, we might think of a "good" day as one filled with friends, family, food, and fun. But families battered by the broken promises and crushing disappointments of substance abuse may find that for them a "good" day determined not by what it contains but by what it does not. In "Four Good Days," based on a true story, a young addict must not use drugs for four days to receive a promising treatment. "Good," for her and perhaps even more for her mother, means abstaining from drugs.

The word "love" may not get re-calibrated for addiction, but it gets modified. We speak of "tough love." And so, when Molly (Mila Kunis), a strung-out addict who has been through rehab and relapsed more than a dozen times, shows up at her mother's house, instead of a warm welcome, she is turned away. Molly's mother Deb (Glenn Close) leans out of the door, her stillness in contrast to Molly's hopped-up shifts of tone. She has been lied to so much and stolen from so often she believes that it is best for Molly if those around her can impose firm boundaries. But Deb wants so badly to believe her. "Whenever I've decided to engage with her it's always been with my eyes open," she says. But hope always pushes to try again, even when experience has shown us it will only break our heart.

Deb does not let her inside the house. "We changed the locks after you and Eric stole the guitars." But Molly will not leave. And the next day, when the drugs have worn off, she agrees to have Deb take her to detox. "If there's anything more f-ing relentless than heroin, it's you. That's my one glimmer of hope in all of this." At the hospital, it is clear they have been through it so many times they know the routine. But only Deb remembers the exact number of times Molly has been through detox: 14. So far.

Three days later, the drugs are out of Molly's system and a doctor makes her an offer, a monthly shot that blocks the effect of opioids. But in order to get the shot she has to stay clean for four more days. Deb agrees to let Molly come home to help her—and so she can keep an eye on Molly. The movie takes on some of the elements of a thriller when each minute is filled with suspense or a horror film when a character who was once most endearing becomes someone who inspires dread and terror.

There are some affecting moments, as when Deb, an esthetician at a local casino, gives a facial to Molly, her tender touch conveying the unconditional love she cannot allow herself to say in words. Molly's ex-husband brings their children for a visit and we get a glimpse of the life she could have had. As in the superior, under-seen "Ben is Back," we learn that the addiction began with carelessly prescribed opioid painkillers for an injury as a teenager.

But the performances, including Stephen Root as Deb's second husband and Joshua Leonard as Molly's ex-husband, far exceed the formulaic quality of the script. Close, for the second time in a year playing the mother of an addict is fine as always, especially when expressing the deep conflicts of a mother who cannot bear the thought of continuing to love her daughter or finding a way to stop. And Kunis shows great sensitivity in portraying Molly's layers and conflicts, from the near-feral ability to manipulate, always sensing whether it is time to lie or to accuse, to the searing pain of the addiction/self-loathing hamster wheel, where "life is a trigger" and it seems the only way to bear the pain and loss and shame of addiction is to keep getting high.

The film is weaker when it falls into heavy-handed metaphors like the uncompleted jigsaw puzzle and the colloquial use of "addiction" to try to place binge-watching the news in the same category as substance abuse. A brief scene in "Less Than Zero" where Robert Downey, Jr. begs his father for another chance has more insight, heartbreak, authenticity, and dramatic weight than this feature-length film. These are important stories that should be seen, but audiences need more than scripts that are primarily acting exercises, with very little insight beyond everyone blaming everyone else and reminders that bad choices by addicts and those around them lead to bad outcomes. 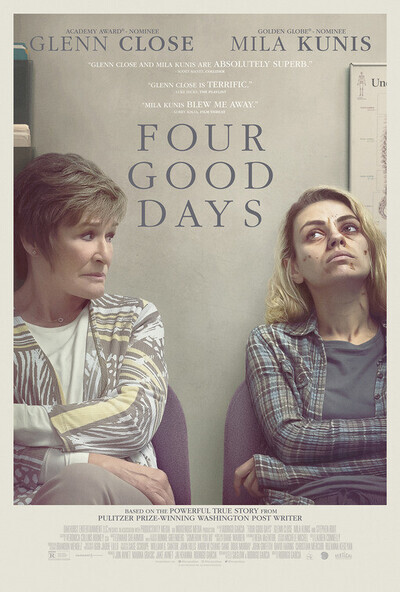 Rated R for drug content, language throughout and brief sexuality.