This racing picture is a period piece, set in the early 1960s, and there’s also something retro about the kind of movie storytelling it represents. Directed by James Mangold and given spectacular horsepower by dual male leads Christian Bale and Matt Damon, “Ford v Ferrari” recounts, in a sometimes exhilaratingly streamlined fashion, a tale of Motor City dominance-seeking that compels you to root for good guys who are doing the bidding of rather bad guys.

Damon plays Carroll Shelby, a champion racer whose hypertension forces retirement. His opening voiceover about what it feels like to hit 7,000 RPM with a car sets the tone in the “Why We Race” category. After hanging up his gloves/helmet in Hollywood, Shelby goes into car sales with a sideline in modification and design, and he also manages some racers, including the hotheaded Ken Miles, played with a cheeky, elastic physicality by Bale. Both fellows are at low ebbs when opportunity knocks.

The opportunity originates in Detroit. There, Henry Ford II, played by Tracy Letts as if he’s suffering incurable heartburn, is dissatisfied with things at the company founded by his grandfather. (While the car is never mentioned in the movie, the Edsel had made its disastrous debut four years prior to the action in this film beginning.) He wants new ideas, and he’s not too crazy about the one brought to him by youngish hotshot exec Lee Iacocca (Jon Bernthal). The idea is to buy the Italian car giant of the movie’s title. Enzo Ferrari not only refuses the Ford offer, he delivers, via Iacocca’s proxy, some vivid insults to Ford the Second. This hurts Ford’s pride. And makes him determined to best Ferrari’s cars on the race track of Le Mans, home of a 24-hour race that has never been won by an American car.

You don’t need to be a car person to appreciate the conventional but crackling human drama that animates “Ford v Ferrari.” On the one side, there’s Shelby and Miles. Both mavericks, but one with a little more give than the other. Tasked by Ford with creating not just a car but a racing team that can best Enzo’s, they go all out with Ford’s money. On the other side are the often truculent Ford and his second-in-command Leo Beebe (Josh Lucas playing buttoned-up cocky). Beebe’s not an ambitious bootlicker. He’s something worse. He’s a guy who adheres to corporate principle because he actually believes it’s right. He doesn’t want Miles as the new car’s driver because the volatile “beatnik” (Beebe’s term) doesn’t conform to his or anyone’s idea of a “Ford man.” Beebe gets his way once, and it doesn’t work out for him.

But the thing about a character like this is if you thwart him once, he will just keep coming back. Beebe’s persistent attempts to screw Miles, in this film scripted by Jez Butterworth, John-Henry Butterworth, and Jason Keller, juice up the rooting interest aspect of the movie. As do its support characters: Caitriona Balfe as Miles’ wife, who is not, contrary to the usual practice in such films, a disapproving worrier; Noah Jupe as Miles' son who idolizes his dad unconditionally; Ray McKinnon as Shelby’s most trusted engineering lieutenant.

Damon is superb in the kind of role he excels at: a man of integrity who gets steered off the path and is subsequently righted. Lest all of this sound heavy, I should assure you that “Ford v Ferrari” is exactly as fun, maybe even more fun, than its well-put-together trailer makes it out to be. The dialogue is replete with zingers and the racing sequences are a blast. Mangold sticks to the verities and conveys high speeds and potentially deadly impacts with a lot of gusto; there’s very little that looks tricked-up or obviously animated.

As for the retro part, well it’s kind of sad: 30 or 40 years ago, a movie like “Ford v Ferrari” would be a staple of studio fare. Nowadays, it’s actually considered a risk, despite being, by an older standard, about as mainstream as mainstream gets. “Ford v Ferrari” delivers real cinema meat and potatoes. And its motor show spectacle deserves to be seen in a theater. 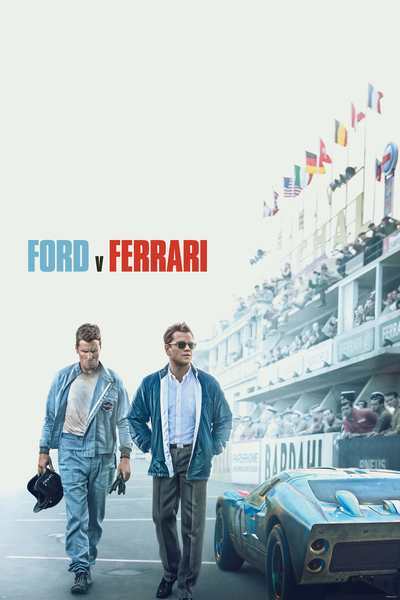