Kate DiCamillo's Newbery Award-winning novel about a girl who prides herself on being a cynic has been adapted into an unabashedly un-cynical and utterly winning film for families about that most unsung of superpowers: hope.

Ten-year-old Flora (a very appealing Matilda Lawler) narrates her own story, and it is clear she would not have it any other way. She likes to be in charge, especially after she learns that the adults in her life are not able to make things work the way they should. Her father George (Ben Schwartz) creates comic books Flora loves about superheroes like Incandesto, who has the power of light. But George has not been able to sell his ideas. He has given up and now has the very non-superheroic job of stocking the shelves in a big box store. This has put a strain on his marriage and he and Flora's mother Phyllis (Alyson Hannigan) have separated.

Phyllis writes romance novels, with characters she says are kind of like superheroes. Framed book covers of her books decorate the walls and she is very proud of a Jack and Rose trophy awarded by Romantic Living Magazine. But the separation from George has made it hard for her to write about love. She and hopes that buying an old-fashioned typewriter will help her connect to a new story.

Flora is feeling disconnected, too. We first see her selling her comic book collection because superheroes who "come to us with a purpose, to save those in need and to stand watch when danger closes in" do not ever show up in the real world. Her motto is: "Do not hope. Observe." She calls herself a cynic and likes to prepare for the worse. One of her favorite books is called Terrible Things Can Happen to You.

But wonderful things can happen, too. Flora meets a squirrel named Ulysses. Or, rather, she names him Ulysses after she rescues him from a Roomba-style outdoor vacuum cleaner, involving mouth-to-squirrel-mouth resuscitation. She brings him home. Like Don Marquis' "vers libre bard," Archy the cockroach, he leaves a poem on Phyllis' old-style typewriter. Flora observes Ulysses, and in spite of herself, she begins to hope. Ulysses just might be a superhero.

The superhero power of this movie comes from its endearingly offbeat characters, goofy humor, and gentle insights about finding optimism even when things go wrong. It is all done with a light touch, though some families may be sensitive to issues like traumatic blindness, parental separation, and the threat of euthanizing an animal.

Screenwriter Brad Copeland ("Arrested Development") and director Lena Khan keep things moving briskly, with energetic action scenes accompanied by lively needle-drops, ranging from OK Go to Cat Stevens, Bill Withers, and Tom Jones. But it never feels hurried. The film makes time for us to get to know the characters and for them to get to know each other. In one delightful scene, George, working alone at night in the store, dances through the aisles.

Every role is performed with verve and humor. Schwartz is terrific with Lawler, with a warmth that makes their connection feel easy and natural. Flora has a new friend, an erudite boy named William (Benjamin Evan Ainsworth) who has been diagnosed with hysterical blindness following an incident he will not discuss. But he turns out to be game for adventure, with special skills that include "seeing" via echolocation by making little chirps, like a bat, and "a knack for absorbing short falls."

The always-welcome Anna Deavere Smith plays Dr. Meacham, a wise guide and a good friend who believes in Ulysses and in Flora. And as every kid-and-an-animal story must, there's a villain from animal control, Danny Pudi as the guy in the uniform, armed with a tranquilizer gun. Kate Micucci as a waitress scared by Ulysses and Bobby Moynihan as a comic book store owner who is a little scared of Flora add to the fun. The real find is Lawler, who shows us that Flora may act like a cynic who enjoys expecting the worst, but she is thrilled to discover how to be open to the magic around her.

Available on Disney+ on February 19th. 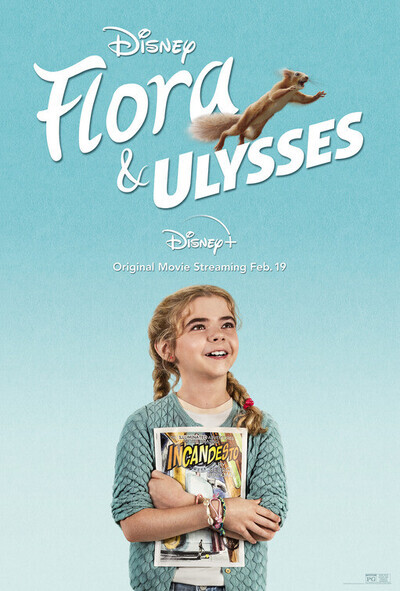