In 1949, a then-unknown Flannery O'Connor was in correspondence with Rinehart Publishers about possible publication of her work-in-progress novel Wise Blood. An editor sent her notes and suggested edits. He clearly didn't understand her book. O'Connor, just 24 years old, responded with an inspiring "kiss-off" letter. Her tone is striking, particularly in someone so young, and someone not at all established as a "name" yet:

I feel that whatever virtues the novel may have are very much connected with the limitations you mention. I am not writing a conventional novel, and I think that the quality of the novel I write will derive precisely from the peculiarity or aloneness, if you will, of the experience I write from.

O'Connor's work is very "peculiar." She was part of the new wave of Southern writers flowing into the American literary landscape in the wake of Faulkner, writers like Eudora Welty, Truman Capote, Carson McCullers. O'Connor's Catholicism is an additional nuance, and in many ways you could say her main topic is faith, her sense of sin and grace, her awareness of mysteries and darkness. She wrote: “I feel that if I were not a Catholic, I would have no reason to write, no reason to see, no reason ever to feel horrified or even to enjoy anything.” It makes sense then that Mark Bosco, a Jesuit priest, would feel compelled to direct a documentary about her, an author both loved and despised, and controversial from the moment she appeared in print. "Flannery," which Bosco co-directed with Elizabeth Coffman, is respectful, with a murderer's row of interview subjects—both O'Connor's friends and family, but also contemporary writers—weighing in on O'Connor's legacy. There's a lot of interesting things here and yet "Flannery" feels incomplete, and—worse—a little bit scared to go in for a much deeper dive.

Incorporating old home movies, extant vintage footage of the few television appearances O'Connor did, as well as "talking head" interviews, "Flannery" walks us through the author's biography, her childhood, her burgeoning talent for caricature (she was sending her cartoons to the New Yorker when she was still in college), her faith, her unrequited crushes, her time at the Iowa Writers' Workshop surrounded by male writers who mocked her accent and were jealous of the praise she got, and then her crushing diagnosis of lupus, from which she died at the age of 39. Mary Steenburgen reads in voiceover from O'Connor's stories and letters and prayer journal.

Using animation to illustrate documentaries is a "thing," so overused now it's a cliche. Here, it feels completely unnecessary. As famous authors read aloud from O'Connor's work, crude animated figures "illustrate" O'Connor's words, like a Saturday morning kid's cartoon. It's overly simplistic, and, frankly, awful (particularly when you consider O'Connor's own talent for satirical illustration). As author Richard Rodriguez observes, "She is one of those writers who is best heard." The documentary would have done well to follow his advice.

Interview subjects include Brad Gooch (her biographer), lifelong friend Sally Fitzgerald, fanboy Tommy Lee Jones (who describes O'Connor, wonderfully, as "a wolf dressed up as a grandma"), Mary Gordon, Ashley Brown (founding editor of Shenandoah), Lan Samantha Chang (director of the Iowa Writers' Workshop, which O'Connor attended), Alice McDermott, Hilton Als (who has written a lot about O'Connor), and novelist Alice Walker (who grew up across the street from O'Connor's dairy farm: the Walker family used to get their milk there). This approach is interesting, but it doesn't serve the subject. These are all learned people, with insightful things to say (I could have listened to an entire documentary of Als' comments alone), but the documentary itself resists complexity and exploration, particularly to O'Connor's more controversial moments, like her racist comments, in letters and in her stories. Als' point of view is that O'Connor was a "reporter" and a mimic: to combat the idea that "representation equals endorsement," he sees that her work was a reflection of what she saw around her. The stupid racist white women who populate her stories were all her mother in disguise. These are intriguing counterpoints to the general narrative. Perhaps a few dissenting voices would have enriched the portrait and deepened the inquiry.

The documentary pays cursory attention to the more controversial aspects of her short life. She was involved in a Red-baiting brouhaha at the Yadoo artists' colony, which made headlines at the time, and is mentioned in the memoirs and letters of every person who was there. It was an ugly incident, a microcosm of what was going on in the country at large, with the McCarthy hearings and the general mood of paranoia. "Flannery" suggests that she got involved mainly because of her crush on poet Robert Lowell (the ringleader), but this does the whole subject—and O'Connor—a disservice. It was not her finest hour, that's for sure. But we all have moments that are not our finest hour. Let's talk about it!

The strange holding power of O'Connor's work is best expressed by an anecdote about John Huston, who directed an adaptation of "Wise Blood" in 1979, starring Brad Dourif as Hazel Motes, the wild-eyed itinerant preacher. Screenwriter Michael Fitzgerald said he wanted an atheist to direct the film; otherwise the religion might come off hokey or "mushy," which O'Connor would have hated. The crotchety realist Huston was the perfect choice. When Huston finished the film, he declared, "I think I've been had." He realized he had made a religious film after all, even as he resisted it. O'Connor's work is tricky that way. While her work is filled with fantastical grotesqueries, O'Connor said she didn't believe literature was an "escape from reality." Instead, literature was a "plunge into reality."

It’s too bad the documentary didn’t take the same kind of plunge. 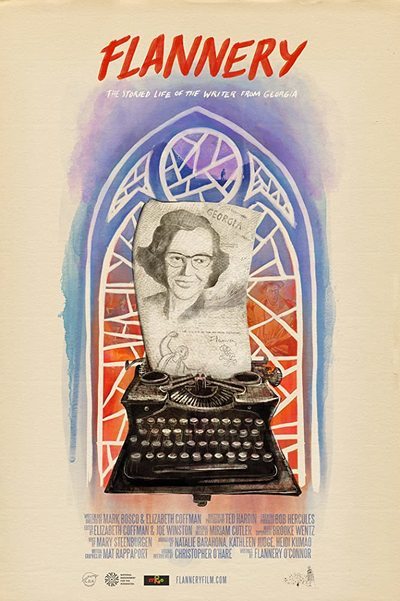