From the opening moments of "Five Dance," in which a young man dances alone in rehearsal space, you can tell that writer/director Alan Brown loves modern dance. Chip (Ryan Steele) is not dancing for anyone. He is dancing to explore the space, to feel his body in motion, to express something beyond language with the twist of an arm, the held tension of a leg raised parallel to the ground, the sudden burst of motion. It's a lovely way to open a film that is at its best when it is displaying dancers in motion and exploring the complex dynamics of a rehearsal space.

Not for Brown the tortured madness of "Black Swan" and its mentally unhinged classical ballet dancers. No, the four dancers and one choreographer we meet in "Five Dances" are more like real dancers I have known: perfectionists whose bodies are fine expressive instruments, but also regular people who kid around and flirt with their coworkers and feel cranky sometimes and don't want to work. The granting of a big solo becomes grounds for petty jealousy. Figuring out the precise way to transition from one dance move to another becomes a complex process of negotiation, with the dancers and the choreographer bringing their shared knowledge to bear on the problem. It's fascinating stuff.

But "Five Dances" also falls neatly within the genre of gay coming of age/coming out movies. Here, the film feels both more conventional and less focused. The characters go through the motions of that plot (Chip's flirtation with a male dancer, the nervous rebuff born of self-denial, the tentative moves forward), but it feels so much less alive and specific than the observation of how rehearsals feel. I found myself wishing we could hurry through the obligatory sex scene with fellow dancer Theo (Reed Luplau) and get back to the dancing. (I was as surprised at my reaction as you probably are.)

Chip is saddled with a needy alcoholic mother (never seen; only heard in agonizing cell phone calls) who wants him to leave New York and the "things" she "knows [he's] doing there." In fact, mostly he's struggling with being 18 and having no place to live and coming to accept his sexuality not as the shameful thing his mother hints at but as part of who he is, and thus something to be embraced and celebrated.

When the camera isn't capturing the way people act in a rehearsal or the five fuller pieces of dancing of the title, that camera spends a lot of time in close-up on Steele's face. Steele is a charismatic actor, and he does a lot without much dialogue to tell us what is going on in Chip's head. And Chip's head is a space of turmoil and change. Chip is 18, with all the awkwardness and fumbling and casual thoughtlessness and false bravado that goes along with that age. He may control his body like an instrument, but he's still learning how to interact socially with people as an adult. He does an awful weird little voice that he clearly thinks is cute (it probably killed in study hall back in high school) but which leaves fellow dancer Katie (Catherine Miller) cold. "Talk normally," she instructs him gently, taking on the role of spirit guide on his journey to maturity.

But Steele simply can't carry the weight Brown puts on him to make the coming-of-age story feel fresh, and honestly the plotting outside the rehearsal space feels at time perfunctory. Characters get bits of backstory that feel unnecessary. When dancer Cynthia (Kimiye Corwin) has sex with choreographer Anthony (Luke Murphy) in the rehearsal space after hours (that room gets a workout in this movie), it feels thrown in, not organic.

But just when the plotting had me sighing with impatience, Brown would get back into showing us rehearsal and things would liven up again. It's in the recording of dance that this movie comes alive. These aren't the giddy tricked up choreography moves of many dance films, with a few leaps and some coordinated mass of movement. It's the exuberant, agonizing, poetic expression of bodies moving through space, alone and together, sometimes both at once. These scenes are more expressive than the more forced drama that surrounds them. But maybe that's the point. It is when they are dancing that these characters are most themselves. 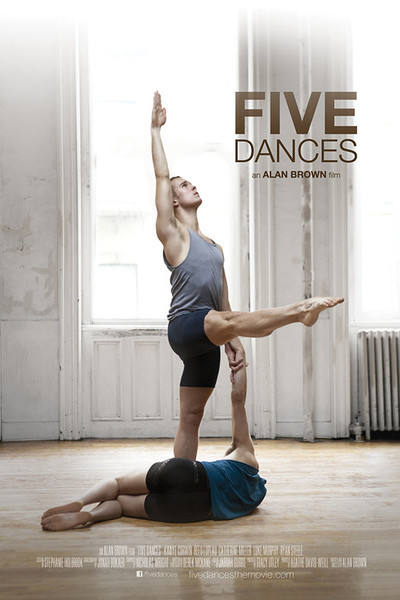