Clothes fluttering out a window are shot like butterflies flying away. It takes a moment to realize something beautiful is something profoundly sad. And it's a good metaphor for a film that on the surface appears to be an inspirational sports movie, but is a hard story about a young woman having to decide if she should destroy herself for the person who deserves it the least. (The opening shot also recalls a moment from Susan Seidelman’s "Smithereens," another story of a young woman who also her own worst enemy.) “First Match” is a film of close-ups of faces and the camera constantly hovering over the shoulder of the protagonist Monique (Elvire Emanuelle). The choice allows the audience into her headspace, and, combined with Emanuelle’s excellent performance, leads to sympathy for Monique’s terrible choices.

Monique is nearing the end of her bounce around the foster care system. She’s disdainful of the kindness shown by her latest foster mother and desperate to reconnect with her estranged biological father Darrel (Yahya Abdul-Mateen II). Darrel was a wrestling champion in his youth and Monique joins the high school wrestling team in an effort to impress him as being worthy of his affection. Darrel takes an interest in her ability but mainly as a way to pressure her into entering dangerous, underground fights. Abdul-Mateen II’s performance is low-key to a fault. He suggests someone wrecked by life to the point of being a spectator to his own bad choices and failures. But it’s hard to understand Monqiue’s desire to make a family with him.

Jharrel Jerome is excellent as Monique’s only real friend Omari; he knows much more than he says in his scenes. He’s the friend to every difficult person, knowing how to read outbursts and silences, and when to press and when to let go. The boy’s wrestling team that gradually warms to Monique is a well-drawn group of jockeying teenage boys, and Colman Domingo is very good as the team’s Coach. He’s seen enough to know you can’t save someone from themselves. But he’s warm and considerate, and Domingo is a terrific listener in his scenes, creating the space for Monique to imagine a better life for herself. It’s curious that the film never sees friends in girls Monique’s age, as if her anger and athletic skill has closed off that avenue of relationship to her, and the film feels like it's missing something because of it.

But there is much to like, and pay attention to in “First Match.” It’s a film of small moments, the flicker of a smile when Monique’s father gives her a new pair of wrestling shoes. The bright lime green of fingernail polish on a hand pressed against a door. The film is shot by Ashley Connor, and her camera constantly holds close-ups on faces engaged in everything from conversations to wrestling matches, catching the waves of feeling underneath a held stare or the seeming animosity that Monique wears like a mask for protection. Peripheral characters like Monique’s foster mother Lucila (Kim Ramirez) are given life in a few held beats of her lips tightening in grief or acceptance of Monique’s behavior.

“First Match” is a tough film with a tender streak for its protagonist and her struggles. Emanuelle’s performance carries the film past its episodic feel and into a sense of a young woman at the crossroads of her life. We rarely get second chances, and sometimes when they appear they can frighten us more than it being the end of the road. “First Match” is at its strongest when it shows how painful it can be to make the right choice. And how lonely it can be doing what is best for yourself. 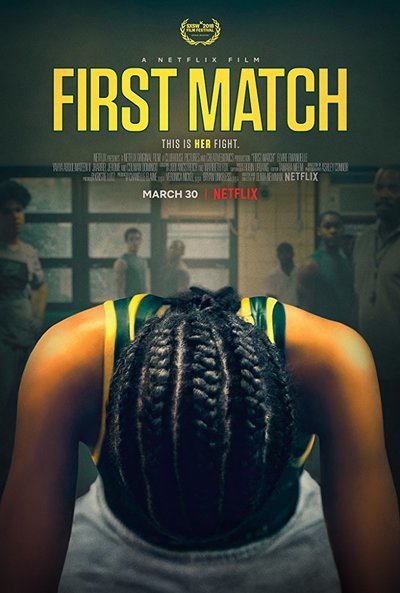