A camera points at a beautiful woman in a scenic setting. She smiles; she is accustomed to being looked at with interest and admiration. But we see through the lens of the camera and the eye of the photographer that the focus has been adjusted to blur the woman in the foreground to sharpen the image of the man behind her and to the left. The photographer is Roman (Oleg Zagorodnii), the man he is literally focusing on is Sergey (Tom Prior, who also co-scripted), the women who does not realize that the photo will not capture her smile is Luisa (Diana Pozharskaya). It is the 1970s and all three are in the Soviet Union-era military in Estonia, based on this true story as told years later by Sergey.

“Firebird” is a swooningly romantic love story, clearly influenced and inspired by films like “Brokeback Mountain,” with themes of forbidden love in an ultra-masculine setting. It also draws from some of the classic love stories of the past like "Now Voyager," with deep, unabashed romanticism, as though the modernist tone of ironic distance never existed. This love story gets the full-scale, old-school glamour treatment: gorgeous people, yearning glances, exquisite images, swelling music, passionate kisses, interlaced fingers, golden moments, anguished moments. Although there are very explicit passages, beyond the wildest imagination of the movie romances of the 1940s and '50s, “Firebird” holds on to the symbolic depiction of passion, with rainstorms and even a shot of planes soaring through the sky at a climactic moment.

As the story opens, Sergey is a private in his last weeks of military service, just as Roman, an officer and a fighter pilot, is arriving on the base. There is an immediate connection over their shared interest in developing photographs. But the difference in their rank, the difficulty of finding a way to sense one another’s interest, and the risk of five years hard labor for homosexual activity make it almost impossible for them to find their way to a kiss. By the time it happens, we are anticipating it almost as eagerly as they are.

Director and co-screenwriter Peeter Rebane evokes the chilliness and repression of the Soviet-era military culture, where discipline is extremely rigid, even brutal, but with the thin veneer of brotherhood. Officers are oxymoronically referred to as “Comrade Colonel” and “Comrade Lieutenant.” Despite the suggestive chumminess of the language, the hierarchy is strictly observed and no departure from even the most trivial of the rules is tolerated. This adds to the already overpowering stakes for Roman and Sergey.

It also provides a sharp contrast with the tenderness and deep emotion of their interactions. To see them naked is not just sexual; it is seeing them freed from the rough constrictions and drab, identical formality of their uniforms, in a state of nature. It is a wise choice to place their happiest and most liberated moments away from the barracks and the drills. Their embrace in the water is a rebirth into a natural world.

Immersion of another kind produces images that bloom on the page to reveal and to capture a moment, a glance, a connection between subject and observer. The delicate process for developing photographs is another counter to the rough, impersonal, military setting. The design of the buildings and uniforms and the endless rules are intended to obliterate individuality, even time itself with its sameness day after day. Everything is directed at order for the greatest possibility efficiency of attacks and destruction. The first photograph taken in the film could be a simple snapshot of three colleagues. But it takes on great import right from the beginning as the group has to lie about the purpose of the picture to appear to follow the rules, and then later as the photographer and the subjects will move very far from the simple camaraderie of that moment.

When Sergey tells Roman that he has never seen a ballet, Roman arranges for him to visit a rehearsal of Stravinsky’s The Firebird, based on the myth of the magical bird captured and freed by a prince, later returning to rescue the prince from an evil immortal. This film is a bittersweet love story about characters burdened by oppression, but the theme of liberation is as palpable as the sense of loss. 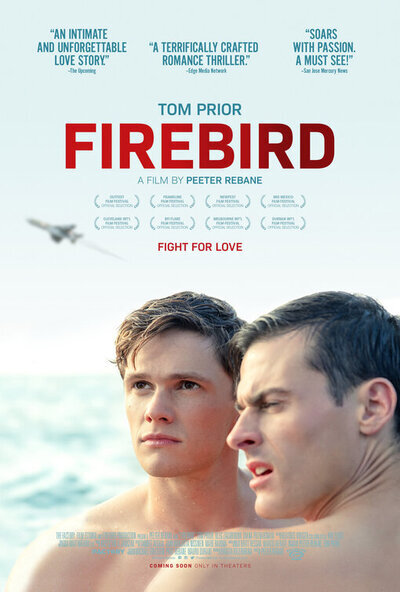 Tom Prior as Sergey Serebrennikov