"Finding 'Ohana" begins with an exhilarating opening sequence as Pili (likeable newcomer Kea Peahu) races a bicycle through Brooklyn. She is geocaching, a GPS-guided treasure hunt that's like an escape room outdoors. "Sorry folks, it's a competition," she apologizes when she knocks people and objects aside in a narrow laundromat, without trying to hide the triumph in her voice. We get a view that puts us on her handlebars, with lively, kinetic editing that makes us feel like we are in the race.

It is not just Pili's riding that's fast. She outsmarts the other participants with tenacity, excellent puzzle-solving, and the ability to communicate with her teammate in Spanish so no one else can hear her solution. She wins! It's a triumphant moment. And the prize is a trip to geocaching camp, so she can work on her skills even more. "This is going to be the best summer EVER!"

But she does not get to go to camp after all. In the next scene, Pili is in a setting so far from the streets of Brooklyn it might be the other side of the world. In fact, it is the other side of the world, rural O'ahu. Pili's perpetually worried, double smoking-cessation patches-on-the-arm mother Leilani (Kelly Hu) has brought Pili and her grumpy teenage brother Ioane (Alex Aiono) back to her childhood home. The children's grandfather (Branscombe Richmond) has had a heart attack and he needs help. Problem number one: He needs even more help than they thought. Problem number two: He doesn't want any help.

Problem number three: E and Pili are not happy to be there. There's not even any wi-fi and almost no cell signal. They miss Brooklyn and do not feel connected to Hawai'i or each other. Ioane insists on being called E because his Hawaiian name is too difficult and confusing for the people he knows. And then Pili finds an old notebook with clues to a treasure left behind by pirates who betrayed the rest of the crew to steal all of the gold and jewels for themselves.

The people who made this movie are clearly big fans of Indiana Jones and "The Goonies," and parents in the audience will appreciate some references. Indeed, one member of this film's cast appeared in both movies: Ke Huy Quan, Short Round in "Indiana Jones and the Temple of Doom" and Data in "The Goonies," plays Leilani's sympathetic old friend.

Pili and E will soon go on an adventure in search of treasure, and they will certainly find something even more valuable. If you don't already know where this is going, here's a hint: "''Ohana" means family. But this movie is not just about finding a way to connect Pili with her brother, mother, and grandfather. This film is also about connection to our larger families, with respectful and ultimately moving themes concerning cultural identity and traditions.

Most of all it is enormous fun, with an entertaining mix of adventure, comedy, heartwarming family moments, and even a little (teen) romance, all to an excellent score by Joseph Trapanese. There are also some energetic and cleverly chosen pop songs on the soundtrack, to keep things from getting too tense, including "Pump It" by the Black Eyed Peas (based on themes from Dick Dale's "Misirlou"). The scenery is gorgeous and the stunts are well staged. The young cast is excellent, including Lindsay Watson as a sweet-voiced islander strongly connected to native traditions, but happy to sing along with Meghan Trainor, and Owen Vaccaro ("The House With a Clock in Its Walls") as Casper, a happily weird kid along for the ride. His commentary on "Lost" as they roam around one of its shooting locations is a hoot.

A recurring series of flashbacks hilariously re-create the pirate story as Chris Parnell, Marc Evan Jackson, and Ricky Garcia act out the scenes narrated by Pili and Casper. The clues in the notebook take Pili, E, Hanna, and Casper to exactly the cave kids imagine when they think of pirate treasure, with delightfully treacherous and scary obstacles like skeletons, spiders (some harmless, some not), puzzles, and contraptions. The various challenges give each member of the search party a chance to lead, and each gets to help and to be helped by others. But the movie's final challenge is one they must all take together as they decide not what can be done but what is right. A twist that brings together native myths and modern challenges is at first surprising and then surprisingly satisfying. We leave the film feeling like we've found some 'Ohana ourselves. 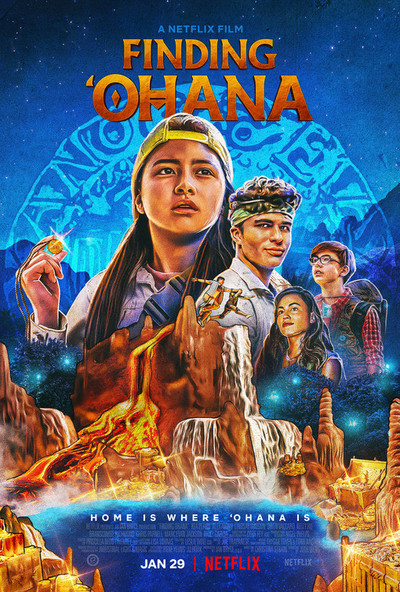