A real-world Santa Claus might very well be like the one in "Fatman"—world-weary and exhausted from the decades of work, frustrated with the kids these days, receiving an annual stipend from the United States government for the seasonal boost his generosity provides the economy. Fraternal co-writers/co-directors Eshom and Ian Nelms definitely and kind of cleverly convince us of the life and workings of a real and really bitter Santa, who is struggling to make ends meet and has lost the jolly spirit of the holidays. Everyone else has made money from his image and good deeds, but he can't even pay the electric bill.

There's an interesting idea in this version of the Santa legend—one who has to contend with a changing world, the everyday necessities of living a relatively ordinary life, the grueling stress of running a flailing business enterprise, and the temptation of making allowances on his values for a quick and easy payday. That's about half of this particular tale, which casts Mel Gibson as one Chris Cringle, the Santa of legend, with magical healing abilities and an intimate knowledge of everyone he meets and seemingly ageless longevity, and an old crank, complaining about the way of the world and taking out his frustrations on assorted Christmas-themed cans with a pistol.

That part of this story is amusing, not only for the significant twist on the character, but also because of its potential for satirical bite. There's another part to the Nelms' tale, though, which is about a pair of cruel and resentful people who believe they have been wronged by Santa.

One is a pre-teen boy, wealthy and spiteful and already convinced of the greatness suggested by his privileged life, and the other is a professional hitman, collecting toys from Santa's workshop as a side hobby when he isn't murdering people for money. When Billy (Chance Hurstfield), the kid, receives a lump of coal from Santa for Christmas (to be fair, he has it coming after ordering the abduction of a classmate, who dared to have a better science project than him, and threatening her with a severe shock from a car battery), he hires the assassin, known as the Skinny Man and played by Walton Goggins (admirably cold and reptilian), to kill "the fat man."

This side of the story has some promise, too, although the filmmakers clearly see these particular characters as the foundation of their twisted premise and the vehicles pushing the central plot forward. The premise, of course, is that Santa is real and targeted for murder by some shady people with a grudge. The plot just has the mysterious hitman getting closer and closer to Santa, leaving a body count in his wake and until a final, inevitability violent confrontation.

For all of the work that the Nelms brothers put into figuring out the logistics of a real-world Santa, and finding a way to convincingly transform the character to match the concerns of that reality, it's more than a bit disappointing that it's all in service of something fundamentally routine. The filmmakers could have done more to explore the hitman, whose motives and hatred for Santa are kept vague until the climax, and much more with the kid, who represents the worst of everything that Chris has come to resent but who drops into the backdrop once the hitman is on his way.

Instead, while the assassin, ruthless and slightly eccentric (he has a pet hamster, which he takes on his road trip up north to find his target), closes the distance, we're mostly left to enjoy what we can within the story of the bitter Chris. He's married to Ruth (Marianne Jean-Baptiste), an expert knitter and cookie-maker, who tries to reignite her husband's holiday spirit. Since so many kids now end up on his naughty list, Chris only receives half of the usual government subsidy, meaning the business of making and giving out gifts every Christmas is in trouble. As a result, he grudgingly decides to take a military contract, which means the elves—yes, actual elves—in his workshop will spend a couple months building, not toys, but parts for fighter jets.

Gruff and always on the cusp of irate, Gibson is fine as this twist on Santa, but his performance, like the whole of the movie, simply rides on a single, warped idea. The slightly clever gimmick and simple plot are the true stars of "Fatman," a movie that misses out on a whole lot of what could have been. 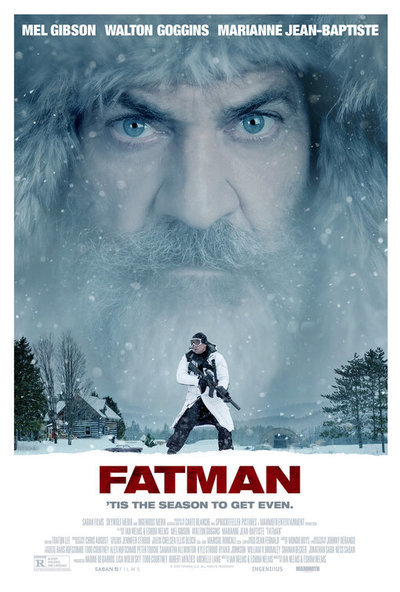