"Father Stu," based on the true story of an improbable journey from boxer to priest, was a passion project for Mark Wahlberg and Mel Gibson, both devout Catholics. And sometimes the problem with a passion project is that the part of the story they want to tell is not necessarily the message they want to deliver.

The real Father Stu began life as Stu Long, the son of an abusive, mostly absent father (Mel Gibson as Bill) and a well-meaning but ineffectual mother (Jacki Weaver as Kathleen). We glimpse Stu briefly as a child, trying to get his father's approval as he imitates Elvis Presley. And then we skip ahead to Stu, now played by Wahlberg, as a boxer whose career has resulted in more injuries than trophies and more trophies than money. Stu has a lot of determination, but when it is clear he cannot fight anymore, he redirects that single-minded dedication to an even unlikelier goal—he decides to go to Hollywood to become a movie star. There he sees a beautiful girl named Carmen (Teresa Ruiz) who is very involved with the Catholic Church. At first, he pretends to be interested to get close to her but eventually, following a very serious motorcycle accident, he realizes that he is called to the priesthood.

There is a scene in the film where Stu, studying but not yet ordained, visits a prison as a part of his training, along with a fellow seminarian who is in the movie solely for contrast. While Stu is impetuous, confident, and blunt, but open-hearted, the other seminarian is studious, sober, and, when it comes to Stu, condescending. It is not a surprise that Stu is able to connect to the men in prison more easily than the student who is literally holier-than-thou. Unfortunately, this first scene that shows us how Father Stu connected to others in sharing his faith takes so long to arrive and is over quickly. His interactions with the crusty and skeptical Monsignor Kelly, the seminary’s rector (Malcolm McDowell) are also unsatisfying because we never see how their relationship changes after Stu convinces him to let him enroll.

How Father Stu is a priest is more important than how he got there. But the getting there is how the movie spends most of its time. And even Wahlberg's movie star charisma and irresistible smile cannot make that part of the film work. The challenge in telling a life story in a two-hour movie is to select those moments that are most consequential and eliminating those that distract from the theme. The real-life Stu faced many complications and challenges, but the script seems to be designed around what would be fun for Gibson and Wahlberg to act. There is also a pre-occupation with mortification of the flesh rather than what would move the story forward by illuminating Stu’s spiritual development.

Other scenes clutter the story’s progress and are not as favorable a portrayal of Stu’s values as the movie thinks they are. He is never accountable for hurting Carmen after she thinks they are going to get married. Another seminarian confesses to Father Stu that he doesn't really feel called to the priesthood but the conversation is presented more as some sort of win for Stu than as a way for Stu to provide some guidance to the person asking him for help. We also get welcome glimpses of the real Stu over the credits and a less welcome extra scene with Wahlberg to remind us of Stu’s goofy adventures before getting the call.

St. Augustine famously said, "Grant me chastity and continence, but not yet." That seems to be the approach of Wahlberg (who financed the film himself when he could not interest a studio) and Gibson (whose romantic partner, Rosalind Ross, wrote and directed, probably the reason he was allowed to overact throughout). As we sometimes see with people committed to highly structured religious faiths, Gibson and Wahlberg are more interested in the "not yet" sinning parts of the story, which are acted with a heightened relish that is not balanced by its scenes of redemption. This undermines the very message they are trying to deliver. Father Stu understood how to connect to skeptics and non-believers. Instead of reaching a broader audience, Wahlberg and Gibson preach to the choir.

Now playing only in theaters. 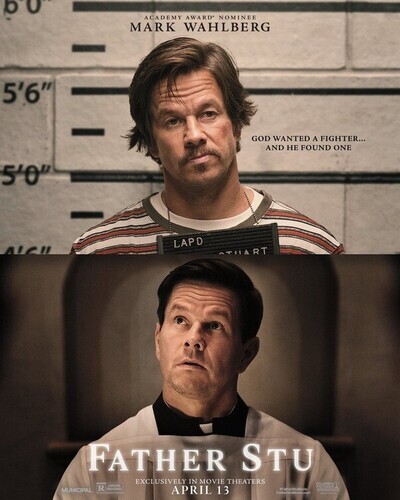