There’s an old saying that “distance makes the heart grow fonder.” I assume the person who coined this phrase had never been in a long distance relationship or was trying to get out of one. Because as Ekwa Msangi’s “Farewell Amor” shows, there’s a lot lost in that distance, like shared histories and mutual understandings. Intimacy is chipped away until once again, you become strangers. Distance can be the heat and pressure that turns some rocks into diamonds, but destroys just about everything else.

“Farewell Amor” begins just at the end of a long separation. Walter (Ntare Guma Mbaho Mwine) left Angola long ago to come to the United States to make a new life for his wife Esther (Zainab Jah), and daughter, Sylvia (Jayme Lawson). After 17 long years, the family finally reunites at JFK airport, but their experiences apart soon disrupt the long-in-the-works reunion. Sylvia has lived most of her life with her father more than a long distance call away. They are strangers to each other now forced to live under the same roof. In her husband’s absence, Esther found a home in her Christian faith and has retreated so far into her church community that she is no longer the woman Walter said goodbye to more than a decade ago. In some sense, even Walter has become a changed man, embracing the freedoms the U.S. afforded him and starting a new relationship in his wife’s absence. He struggles to end things when his family arrives, and both Esther and Sylvia suffer bouts of homesickness in this new country. Their problems are interconnected yet kept hidden from each other until their newfound physical closeness forces them to confront each other.

Just as the movie begins to hit its stride, the film’s perspective changes from Walter’s point-of-view to Sylvia’s and then Esther’s. We gain a new appreciation for what each character is going through at different points in the story. From Walter’s perspective, Sylvia just seems like an aloof teenager, uninterested in reconnecting with him. When we see her side of the story, we get a glimpse of her panic in these new uncomfortable situations. We see many texts to friends back home and a secret love of dance her mother has forbidden her to pursue. Esther may seem like a domineering, God-fearing matriarch at first, but when we see what she’s going through, there’s a painfully insecure and vulnerable person unsure if she can make her husband happy again or is it already too late.

Writer and director Ekwa Msangi constructs this nontraditional narrative with an attention to detail for each of these characters. Just as important as their conversations is their body language and how it shifts around one another. These are subtle details like how Sylvia’s aversion to her father manifests itself as side-eyes and physically avoiding him. Without saying it outright, we can see she resents him for bringing her here. Meanwhile, Esther carries herself proudly in almost every other room in the apartment, except in the bedroom with Walter. It is there that her insecurities are at their most volatile. She covers herself self-consciously when she feels disconnected from Walter. Time and distance has taken its toll on their relationship.

Msangi and cinematographer Bruce Francis Cole capture the various experiences at play in “Farewell Amor” with equal sensitivity. Outside the windows of Walter’s cab, Brooklyn feels like a never-ending world, one Sylvia eyes with nervous wonderment and Esther looks at with suspicion. Sylvia explores much more of her surroundings because she goes to school and wants to break into the dance scene—her mother’s moralizing words be damned—and her journey comes with an extra degree of camera movement. Walter gets stuck in his thoughts, mourning the love he gave up and unsure of the one he’s picked back up, through close-ups and a sense of stillness. Esther comes to rely on neighbor to help navigate her rocky reunion, and it’s through those interactions that we see her come out of her shell and into the light. Altogether, the trio crammed in the apartment always feel like they’re in each other’s way or about to step on each other’s toes. There’s a sense of claustrophobia that they will have to work through.

In “Farewell Amor,” distance sets the scene and gives each character some sort of secret to cope with. Walter drifted to a new lover, Esther found community elsewhere, and Sylvia is becoming her own person independent of her parents. Distance has become a a shared trauma, one they will each have to work through if they want to be a family once again. While distance brings about the end to any number of relationships, the characters of “Farewell Amor” don’t let years of separation have the final word on what happens next. 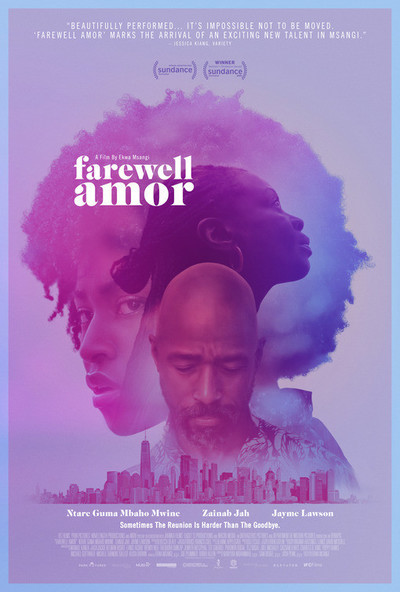