Far From the Tree

The acclaimed and award winning writer Andrew Solomon (perhaps best known for his groundbreaking study of depression, The Noonday Demon) authored the book on which this movie, which shares its title, is based. Directed by Rachel Dretzin, this documentary makes Solomon one of its subjects.

The book and movie are about parents and children who wind up being terribly different from each other. By “terribly” I don’t necessarily mean “sadly.” Although that is sometimes the case. The movie opens with Solomon talking about himself, and the way that his discovery, as a child, that he was gay devastated his parents. And how cutting his mother was about it. Solomon also discusses the particularities of his personality growing up. He refused to be like anybody or everybody else, as the old Kinks song says—although Solomon wouldn’t know, since one of the particularities he mentions is a refusal to listen to rock and roll. “I was a weirdo,” he admits.

The film’s opening features soundbites from a number of differently abled individuals, all of whom we get to know more fully as the movie goes on. A man with dwarfism talks about how what are called “average” people will approach him, unsolicited, and tell him that if they had his condition they’d kill themselves. This pronouncement goes beyond a lack of empathy—it shows an almost sociopathic lack of emotional imagination. As the subjects of the movie go on to make clear, the consciousness of the differently abled person does not necessarily process the self as inherently DISabled, or even “less than.”

Which is not to say there aren’t challenges. One of the most moving stories in the picture is about Jason Kingsley, born in the early ‘70s with Down Syndrome. Jason’s mother tells of how doctors said he would be “retarded,” and a practically immobile vegetable, but the parents found Jeff not only responsive and warm but able to learn. In childhood, he became a near-celeb because of his advanced-for-his-condition learning curve. But in his adulthood Jason has his struggles, becoming fixated on fantasy figures whose reality he insists on. “Do you think people still look up to you, that you’re someone to admire?” his mother asks him in one conversation. “No,” he replies glumly.

It almost feels voyeuristic to watch early videos of Jack, a child with autism, struggling while his parents struggle to communicate with him. But these do a good job of setting up the “miracle” when a trained specialist is able to make a breakthrough with him. These and other stories are intercut with Solomon’s own narratives of his life’s struggles. Giving a lecture, Solomon asks, “If it is possible for the illness of homosexuality to turn into the identity of gayness,” then what are the other “illnesses” we will stop trying to cure.

One answer comes from Leah, a woman with dwarfism who’s married to Joe, the fellow who at the movie’s onset related the “I would kill myself” anecdote. “I don’t think I need to be fixed,” she says. The couple are expecting a child, and it’s an open question for a while whether the child will have dwarfism as they do or be average.

A less happy resolution meets the parents of Trevor, a teen who, after a seemingly normal childhood, plotted and committed the murder of an eight-year-old boy. After having a battery of tests done, Trevor’s father recalls waiting for the revelation that would explain the unimaginable. None came. “He was just broken,” the father says.

Near the end, the urbane and erudite Solomon says that he used to agree with Tolstoy’s formulation, in the first line of Anna Karenina, that all happy families were alike but each unhappy family was unhappy in its own way. Now, Solomon says, he’s dazzled by “all the different ways people find to be happy.” That, of course, is a measure of social progress—in Tolstoy’s time, a child that was too “different” would be locked away, shunned, exiled, and that family could pretend to happiness or succumb to a shame that society would at least partially deny. People can find ways to be happy now because they have more choices, more resources. In a world that seems in many respects to be headed to hell in a handbasket, that’s a fact worth celebrating, and this movie does so in an appropriately humane manner. 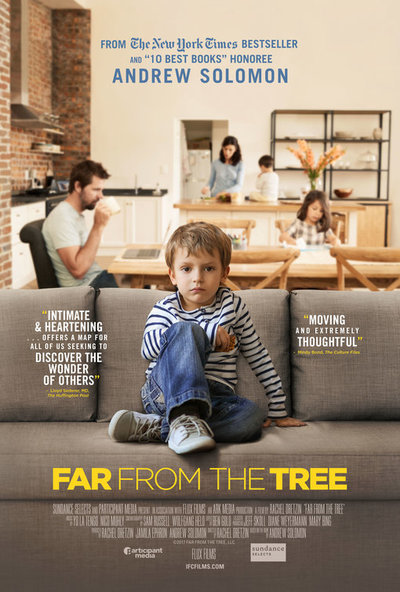