It goes without saying that “Falling Inn Love” is a cliched romantic comedy—that’s all a part of the packaging. The film is out on Netflix today but was produced in part by MarVista Entertainment, a company behind romantic flicks like “Rodeo & Juliet,” “A Christmas Movie Christmas,” and “Will You Merry Me.” They’re a Netflix-like entity unto themselves who push that sweet adrenaline of tension found within romantic tales, where if you like the people on-screen, you’ll sit through them being pushed together and pulled apart and brought back together. This movie, capably directed by Roger Kumble and written by Hilary Galanoy and Elizabeth Hackett, is even slapped with a title that tells you where this amorous adventure’s going to take place, and that its cheesiness is name-brand. "Falling Inn Love" may look and sound like a lot of other movies, but you could never confuse it for being dishonest.

Things don’t start off with much promise, though, as the story has little tact in forcing its set-up for what becomes the story of a city woman flung into the country. After her hiring company implodes and after breaking up with her wet blanket boyfriend Dean, Gabriela (Christina Milian) gets toasted on some white wine and enters a contest that offers the chance to “win an inn” in New Zealand. As someone who is passionate about environmentally-friendly homes, she writes in the required 400 word essay about how it would be her dream place, even though she mostly intends to flip it and go back to San Francisco. The next morning, she’s won the inn, and minutes later, she’s in New Zealand, because travel works like that in romantic comedies, c'est la vie.

The first local she meets is Resident Hot Guy Jake (Adam Demos), who crashes his truck into Gabriela's luggage as it rolls down a hill, while she scampers to get a bar of cell phone reception. We soon find out that he’s a volunteer firefighter, handyman, and also a beekeeper. He's perfect, but has a recent loss in his life that the makes him mysterious and unavailable, at least until someone like drops into his tranquil yet gossipy New Zealand town of Beachwood Downs.

After brushing off Jake's offer to drive her into town, Gabriela saunters up to the inn that she’s won, and it’s a mess. The light bulbs explode when she tries to replace them, the piping has a mind of its own, there’s a goat named Gilbert hiding in a closet upstairs. Like this movie’s structure, all it needs is a little TLC and tact, and it just might be able to dazzle. But Gabriela can’t do it on her own, and her rehabilitation project receives some support from spunky locals like a hardware store guy named Norman, and a gardener (Claire Chitham), who has her own unaddressed problems with relationships.

Gabriela is at first resistant to get help from Jake in order to assert her independence, dismissing him any time he appears when she’s in town meeting the other locals. But as tension goes, that's not sturdy enough a reason for her to deny the attraction we know she feels. Add to the many rotten, predictable comedy sequences—being surprised by Gilbert, three times!—and things start to feel pretty dire.

But “Falling Inn Love” starts to brighten up once it allows the chemistry to work as Milian and Demos present opposites attracting and working together, partnering up on the inn. The dynamic starts to come from their values: she’s a modern type who wants to fix up the house with solar panels, he wants to preserve the old stuff, like a fireplace that’s been there since the beginning. With her playful nature and his serious gaze, they become an unlikely duo to truly root for. And yet, when Gilbert the Surprising Goat breaks one of their elongates stares before a kiss, it’s not a cheat, but right on schedule. Plus, we haven't even seen Demos shirtless at that point.

The wholesomeness even works to its advantage too, building its tension to the promise of an appropriately TV-PG kiss, and killing that high by then complicating things with a jealous bed & breakfast owner, along with Gabriela and Jake’s stubbornness to fix things with one heart-to-heart. "Falling Inn Love" blissfully denies its characters the single conversation they could have to smooth things over, and it becomes fun enough to see them amble towards the film's finish line of a make-out session before the camera flies up into the sky.

This is an impressively mechanical distraction that owns its cliches, for the most part. It even finds a way to put a brief reference of Jake being a volunteer firefighter to dramatic use, though there aren’t any scenes of him acting as sexy beekeeper. But as "Falling Inn Love" builds from the familiar, it shows the vitality of the form: The bad kinds of rom-coms feel automated, and perish right into their self-made plot holes instead of gliding over them with a wink. The good ones supplant a lack of surprise and reality with charisma, based on buoyant chemistry from the two objects of our affection. “Falling Inn Love” is one of those better, shinier kinds. 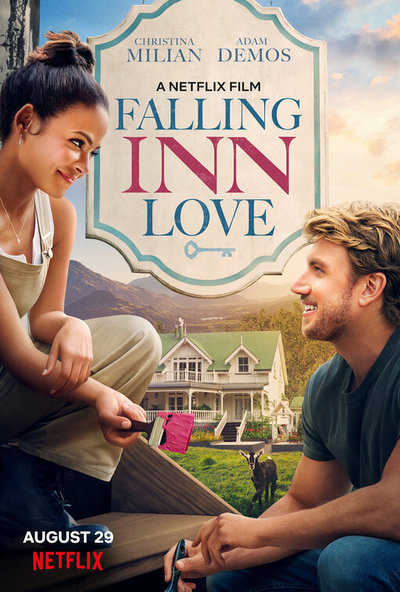