Suspension of disbelief is key to all cinematic genres, but romantic comedies—by nature of their sometimes-outsized emotional swings—often demand more. Of course a person would want to abandon their lives to pursue their seemingly impossible dreams. Of course two people who initially seem to loathe each other will actually end up loving each other. Of course the citizens of a small, working-class village would be exuberantly passionate about something as seemingly random as opera. These are all familiar, even predictable, elements for the genre, but “Falling for Figaro” handles them with such ease and such deftness that it’s comfortingly easy to fall under the film’s gentle charm.

“Falling for Figaro” focuses on twentysomething American Millie (Danielle Macdonald), whose life in London is quite comfortable. She is a trust fund manager at an investment firm, earns an impressive salary, drives her own luxury car, and owns her own beautiful home. She’s surpassed the success of her former boss Charlie (Shazad Latif), yet he doesn’t seem to mind, and their long-term relationship is fairly stable. But is Millie truly happy at work, or truly fulfilled by her job? No on both counts.

What really moves Millie is opera, whether she’s attending a live show or watching clips of performances online. So Millie takes a chance on herself: She’ll spend a year training in opera singing, and then she’ll try out for the national “Singer of Renown” contest. If she fails, she’ll go back to her old career—and nearly everyone seems to think she will, including Charlie, who is more tolerant than supportive. But Millie is undeterred: “Why shouldn’t I follow my heart? I’m not that old, and it is not too late,” she insists, and Ben Lewin and Allen Palmer’s script is peppered with confident declarations that Macdonald delivers with poise and self-assurance.

The best way to break into the opera world is through the Singer of Renown competition, the winner of which receives a contract with an opera company. So Millie travels to a small village in the Scottish Highlands, where she becomes a student of the “Mad Diva” Meghan Geoffrey-Bishop (Joanna Lumley). As a coach, Meghan is demanding and cruel, and charges Millie exorbitant rates—and she’s also training one other student, Max (Hugh Skinner). Her surrogate son who also serves as the chef, plumber, and maintenance man for the Filthy Pig pub next door to Meghan’s studio, Max has competed in Singer of Renown in previous years, and has always been the runner-up. Millie’s arrival signifies not just a divide in Meghan’s attention, but also means Max has a new rival.

But remember the genre! Of course Max and Millie do not stay enemies in “Falling for Figaro,” and that reveal should not be a spoiler of any kind. Instead, the film benefits from the ensemble’s steady, committed performances and director Lewin’s well-staged singing scenes. The idea of following your dreams, no matter how ridiculous they might seem to others, is treated with respect and dignity here, and that approach helps the film stay grounded. Macdonald’s performance has the same effect. She portrays Millie as a hard worker and blunt communicator who is willing to put in the effort to succeed (“Toast to my success, or go f**k yourself,” she tells the skeptical Charlie), and that practicality sparks well against Lumley’s zaniness as Meghan (so many smirks and raised eyebrows!) and Skinner’s initial childishness as Max.

The film’s humor is that dry British kind (Meghan flipping through an entirely blank calendar to try and find a date to squeeze in Millie’s first lesson; Filthy Pig owner Ramsey, played by Gary Lewis, correcting Millie when she guesses that Meghan hasn’t had sex in 20 years), and the result is bursts of laughter that punctuate the film’s otherwise romantic mode. All of Lumley’s deadpan line deliveries, including her “The girl might have potential” while Max dazedly watches Meghan buy pounds of lox with Millie’s overpriced lesson fees, are a particular highlight.

Disappointingly, though, it’s that very romance that is sometimes lacking in “Falling for Figaro.” Macdonald and Skinner are both strong singers who draw viewers into their operatic performances, but the film hampers itself by making their attraction to each other solely play out during their rehearsals or duets. Myriad longing gazes are evocative, but more conversations between Millie and Max about what they individually want or about what opera means to them would have been more impactful. Millie’s “I think I’m irresistibly attracted to the tragedy of it all” isn’t enough, and it’s a testament to Macdonald and Skinner that they inject chemistry into their characters’ underwritten pairing. Their performances are what make “Falling for Figaro” an entertaining distraction, even as the film plays out exactly as you would expect. 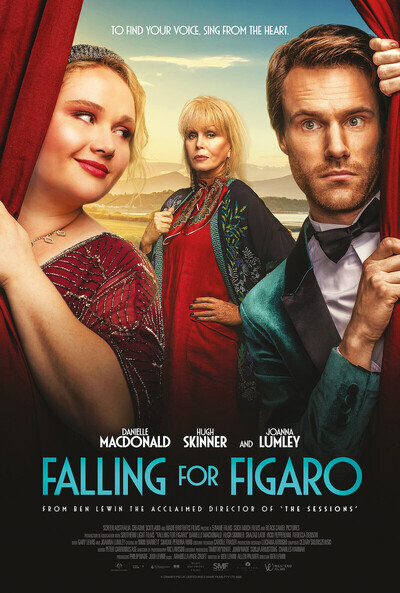