With a new crime docuseries every week, I thought I had reached my tolerance level for the genre, but Epix’s “Fall River” reminded me of how well these kind of long-form investigative journalism pieces can be done. Director James Buddy Day doesn’t just offer a recounting of horrific events with excessive drone shots and talking head interviews, he becomes an investigator of a trio of murders that shook the town of Fall River, Massachusetts, a town already notorious for a murderer named Lizzie Borden. At the height of the Satanic Panic that gripped the nation, a series of incredibly graphic crimes unfolded in this East Coast town and it’s clear that no one ever got to the bottom of the case until Day started his documentary project. In fact, the project’s biggest flaw is that it ends too abruptly, as if a deadline had to be met for Epix before this story was really over. I’m eager to see a fifth hour in a year or two about the developments that end this series. And I haven’t been eager for more of any streaming or cable docuseries in a while.

In 1979 and 1980, Doreen Levesque, Barbara Ann Raposa and Karen Marsden were killed in Fall River. And they weren’t just murdered, they were brutalized with details that are too horrific to include in a review. It started with the death of Levesque, who was found under the bleachers at a local school, her hands tied and her skull crushed by a large rock. Three months later, Raposa was found in the woods with signs of similar trauma. The two cases were almost certainly connected. When a potential witness named Karen Marsden was dropped off by the cops after speaking to them, she was murdered only a few hours later. Her head was never found.

At around the same time, stories of Satanism spreading across the country gained momentum in the news and on talk shows. A violent pimp in the area named Carl Drew was accused of being a Satanist,  someone who used the girls who worked for him in his bloody rituals. Another player in the Fall River criminal underground named Robin Murphy pointed a finger at Drew, but later recanted some parts of her story. In fact, some investigators think Murphy, despite only being 17 at the time, was a violent enough figure in the community to be one of the killers. One of the original investigators says in one of the series’ many excellent sound bites, “Robin could eat pizza and then kill you right after that and it wouldn’t bother her at all.”

Were the murders a result of a prostitution turf war between Drew and Murphy? Was Satanism involved at all? There’s a consistent sense throughout “Fall River” that no one on either the investigative or criminal side of this story seems to know all the details. It makes for incredible momentum in terms of investigative journalism as Day carefully contrasts eyewitness accounts, detail about the cases, backgrounds that may have provided motives, etc. Unlike a lot of recent crime docuseries, “Fall River” never drags because Day keeps the pace humming through the various different theories about these cases. It reaches an end point in a very effective final hour in which I have a pretty strong theory as to who committed all three crimes—well, at least the first two for sure—but it all happened so long ago that actual closure seems unlikely.

But then “Fall River” was derailed by COVID. Jailhouse interviews with people like Drew and Murphy were put on hold and the project lost some of its thrust. Sadly, that leads to a final segment that feels rushed, especially as Day seems to have reached a solid conclusion that should provide some interesting new trial motions regarding getting potentially innocent people out of jail (and even finds a new eyewitness, who reached out to the production with a story that I’ll only politely call questionable, but his very existence needs further exploration).

Day also succeeds by never downplaying the true evil of these people. Many of them are products of violence, people who were abused or raped when they were young and traumatized into repeating those patterns. There’s a sense that journalists and investigators used Satanism to sort of explain away brutal crimes in the 1980s, and “Fall River” reminded me of one of the reasons why—there’s so much evil in this world that it can actually be comforting to excuse it as the work of followers of Satan off in the woods somewhere. It otherizes truly awful crimes that are perpetrated every day down the street. It clouds the real issues at play like investigators ignoring crimes against children or sex workers. It’s easy to say it was all the work of Satanists. Life in Fall River was never easy.

Starts on Epix on May 16th. Whole series screened for review. 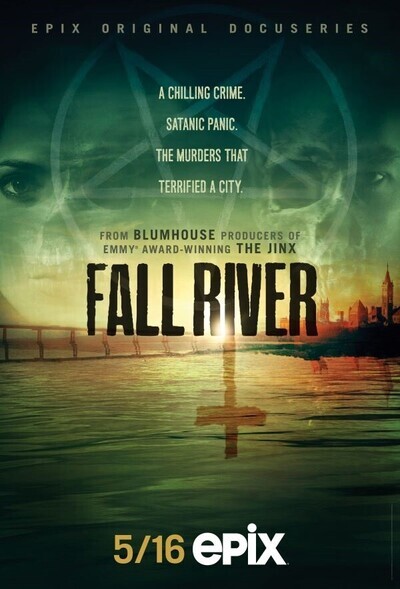