We do not talk about explorers much these days. The stories of Columbus, Magellan, Sir Edmund Hillary, Shackleton, Perry, Armstrong, and Aldrin may still dazzle us, but these days it's more about scientists sending technology, not humans, into the sky and the oceans to report back to us. Mount Everest was a front-page story of astonishing accomplishment in 1953. Now anyone in reasonably good physical condition and with enough money can book passage to the summit and the top of Mount Everest is so crowded there are complaints about “over-tourism.”

But there is still one explorer whose accomplishments are so fearless, audacious, and gallant and whose backstory is so preposterously noble (literally) and recounted with hilarious British understatement that we might not believe it but for this new documentary, simply called “Explorer.” Ranulph Fiennes, as he would prefer to be called, was born the 3rd Baronet of Banbury, full name: Ranulph Twisleton-Wykeham-Fiennes, with the title “Sir.” He has been dubbed by none other than the Guinness Book of World Records as “the greatest living explorer….spen(ding) his life in pursuit of extreme adventure.” Any single one of his accomplishments could have earned the Guinness Book’s Icon award, but as the list of some of them scrolls through the early part of this film, the cumulative impact is breathtaking. Just a few:

He also wrote two dozen best-selling books, delivered hundreds of lectures, and, when he was told he had to wait five months to have his frostbite-damaged fingertips amputated, went into his workshop and cut them off himself. We see him look down at the results of his amateur surgery casually noting, as if someone put too much salt in the soup, “that one and that one made rather a botch-up.” He also auditioned to play James Bond and says he made it into the final six candidates, but “they gave it to that other chap.”

Director Matthew Dyas has an ideal documentary subject in Fiennes, an arresting character of remarkable accomplishment, documented through archival footage that makes clear how punishingly brutal the challenges of the adventures were. Some of the archival footage looks scratchier than anything from the last 30 years should, perhaps to underscore the impression of Fiennes’ accomplishments as connected to forebears like Hillary and Perry, or perhaps just to underscore the dire conditions of the locations. The organization of the film, jumping back and forth in time, is distracting. But the subject is never less than enthralling.

Fiennes does not try to explain his expeditions with heroic “because it’s there” rhetoric. He simply says he did it “to pay the gas bill.” But the movie does not shy away from consideration of the white privilege that allowed the baronet to make a life out of exploring. He might need money, but he understands that is not the same thing as being poor. His thousands of sponsors include a man who kindly gives him an office job for ten years, with three months off each year for expeditions. Another sponsor is Prince Charles.

When Fiennes returns to the North Pole, we also briefly see through his eyes the impact of climate change.

It is touching to see Fiennes, who is almost a parody of the strong, silent hero, described as “a piece of granite all the way to the heart,” so utterly devoted to his childhood sweetheart Ginny, who was his full partner in planning and getting the funding for all of his expeditions. Their hug when he is rescued, near-frozen, near-starved, is all the more endearing because it is a glimpse of the depth of his feelings we do not see again until Ginny is gone. For the first time, his motto, from The Golden Journey to Samarkand, “always a little further,” cannot get him to move forward. Until he does, finally achieving Ginny’s greatest wish for him. He embarks on the most universal of journeys, and yet one of the most terrifying adventures of all. He becomes a father. 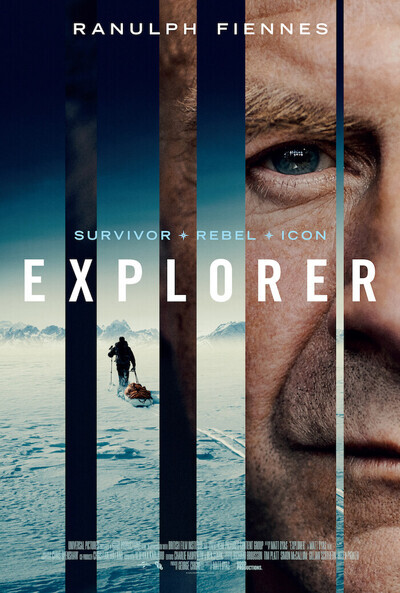 Ranulph Fiennes as Himself

Anton Bowring as Himself