If I had to pin down "Evolution," I'd call it a coming-of-age story, though it doesn't often employ the symbolic shorthand that so many tales of pubescent terror do. No, "Evolution" feels like a transmission from an alien world, one where all the important narrative information you need is imparted visually. This is a supremely confident story about Nicolas (Max Brebant), a lonely little boy who grows up in a community of sickly-looking women.

Nicolas refuses to believe, as his mother (Julie-Marie Parmentier) insists, that he is sick. He swims in the turbulent ocean that surrounds his island home whenever he can and gets lost in daydreams that he visualizes through crude pencil drawings he keeps hidden away from his mom and the legion of pale, sunken-eyed nurses. They keep Nicolas captive in a rundown-looking hospital for young boys. There are no men on the island, only boys and women.

We learn about Nicolas's world in increments, but not just because we are learning alongside Nicolas. This is a movie about the alien feeling that accompanies any natural process of adaptation. Writer/director Lucile Hadžihalilović ("Innocence") respects and preserves the mysterious, brooding energy that ushers adolescent Nicolas from one revelation to the next. This is, after all, a story about characters who know more than they care to admit and the moments that force them to change or die. It's a movie about discovery, and it's the most novel, unsettling horror film of the year.

We learn so much about Nicolas based on Hadžihalilović's gorgeous nature photography. We watch as Brebant navigates the shores of a remote island landscape: loamy rocks cover a sulfur-grey beach while waves roar and crash on the shore. Hadžihalilović never lets us lose sight of the fact that Nicolas is, unlike his fishy-looking captors, seeing the world through human eyes: we tellingly don't see the ocean floor until we've already seen the skyline.

Still, we watch Nicolas from a distance, as we watch (from what appears to be a camera crane or maybe just through a wide-angle lens) when he travels across his island home, his path lit only by a small lantern. We know things he doesn't, as we see in scenes where Nicolas' nurses stoically watch medical footage of a Cesarean-section birth. But Nicolas understands that his world is unstable, that information is being withheld from him and that the status quo his mother enforces is ... well, off. He chokes down the weird gruel-like noodle dish she prepares for him, but based on his facial expression you can tell that on some level, Nicolas knows something is wrong. He likewise wants to trust nurse Stella (Roxane Duran), an atypically curious companion who becomes like a surrogate mother to Nicolas after his real mother abandons him to hospital care. But Nicolas can't trust Stella, as we see in the scene where she practically drowns him when they go swimming together.

Hadžihalilović's direction is remarkably assured. She and cinematographer Manuel Dacosse explain so much just using a dark color palette of seaweed-greens, brackish-greys, and azure blues. But Brebant's body language says almost as much, though it sometimes appears to be communicating relatively quietly. Take for example the scene where Stella asks Nicolas to see his drawings. She discovers his sketchbook completely by accident: she insists that they shower together once he is admitted to the hospital, though he resists the idea ("I can do it myself").

Once she starts to undress him, Nicolas' notebook falls out of his back pocket. He rushes to retrieve his drawings, but it's too late: Stella sees the book and politely demands that he show it to her. Here's where Brebant really impresses: he pauses before acquiescing. And in that pause, you can see that Nicolas knows more than his actions indicate. He knows he's not just being paranoid and that there is a very real chance that showing his drawings to Stella will lead to punishment. But he submits anyway. Without any dialogue, Brebant (who is filmed in a longshot that shows his body from head-to-toe) shows us that his character is excited but also suspicious. He's flattered by the attention and wants to let his guard down (perhaps because of having grown accustomed to submitting to the will of women like his mother). And he wants to change, an overwhelming desire that shows in his inward bent knees, deferred gaze and slouched shoulders. The makers of "Evolution" may dazzle viewers with an intoxicating visual style, but they never lose sight of Nicolas' humanity. Do not miss this film. 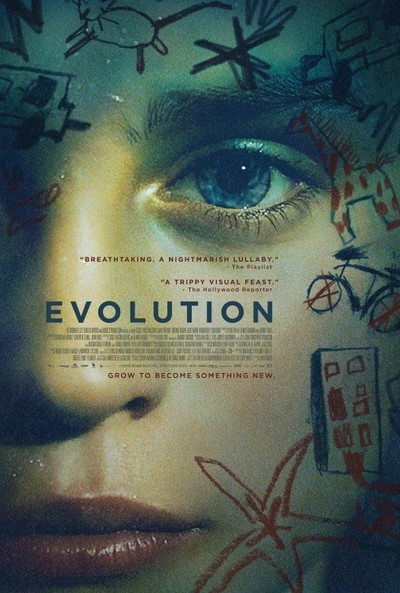