The stage-to-screen adaptation of “Everybody’s Talking About Jamie” still keeps many of its theatrical stylings intact but it doesn’t make its core story any less affecting. It’s a familiar coming-of-age tale along the lines of “Billy Elliot” or even the Harry Potter series. A young boy, in this story his name is Jamie (Max Harwood), fancies a life beyond the doldrums of his working-class English city. His mother Margaret (Sarah Lancashire) tries her best to support him even as his classmates mock him for being gay, a stern-faced teacher disapproves of his behavior, and his father (Ralph Ineson) rejects him outright. Instead of hiding himself and his outgoing personality, Jamie decides to pursue his dreams of becoming a drag queen with a little help from his friends—Jamie’s best friend and aspiring doctor, Pritti (Lauren Patel), and a newfound drag mentor named Hugo (Richard E. Grant), the once former Loco Chanel.

As far as coming-of-age musicals go, “Everybody’s Talking About Jamie” sends a charming, feel-good message of self-acceptance. True to his 16-year-old self, Jamie has some growing up to do, and not just as a soon-to-be drag queen. He must learn more than just how to walk in heels—a ruby slipper pair—but also how to craft an on-stage persona and knowing when to let her fight Jamie’s battles or let Jamie forgive those who wronged him. From the start, Harwood’s performance as Jamie is as sparkling as the tiaras and glittery shirts his character wears. He commits himself to the highs and lows of Jamie’s story with a wide-eyed enthusiasm that suits the character just perfectly, throwing his long limbs into dream sequences-like dance routines that show off Jamie’s confidence and joy but also a sense of vulnerability and shyness. As Jamie’s best friend, it seemed at first that Patel’s character would be outshone, but over the course of the musical, her role also begins to change before her own turn at the spotlight.

Director Jonathan Butterell uses those dream sequences to tell more of Jamie’s story as well as Jamie’s fantastical imagination. For example, when a teacher punishes him for asking Pritti to fix his badly drawn-on eyebrows, Jamie tumbles through an art-themed song of rebellion expressing his frustration but also embracing himself as a “work of art.” Greeting him at the start of the song is none other than the drag queen legend herself, Bianca Del Rio, one of Jamie’s heroines. She’s also a nod to the mainstreaming of drag culture and the lasting influence of “RuPaul’s Drag Race.” Tom MacRae, who adapted his stage play and musical with Butterell and Dan Gillespie Sells, guides Jamie through his journey of self-discovery, but seems hampered by the inclusion of so many songs into the movie’s running time. Some numbers, like the ballad that Jamie’s mom Margaret sings, slow down the film’s momentum while other songs happen back-to-back, with little in-between time to reset the tone.

But one new addition to the movie is perhaps its highlight. With “This Was Me,” drag shop owner Hugo shows Jamie not just his fabulous past as Loco Chanel, but also what his gay community went through during the AIDS crisis, the death of Freddie Mercury, the street protests, cops arresting queer clubgoers and the radical moment when Princess Diana talked with AIDS patients. All this through the lens of a camera held by Hugo’s lover, who we see does not survive. In one emotional song, using recreated historical moments and archival footage, Hugo shares just a small part of the history behind drag culture in Britain, something Jamie and other young queer people of his generation may not have fully understood or reckoned with in an era where drag queens have global followings, discrimination laws protect queer communities from being targeted and medicine has advanced to help manage HIV/AIDS. Grant, a charming addition to an already endearing movie, shifts his performance from an exasperated gay elder to a teary-eyed storyteller who still feels those losses from decades ago. It’s in those moments of honesty and vulnerability, like Jamie’s apprehension before taking the stage for the first time as a drag queen, that makes “Everybody’s Talking About Jamie” a heartwarming musical with the performances to really make it shine. 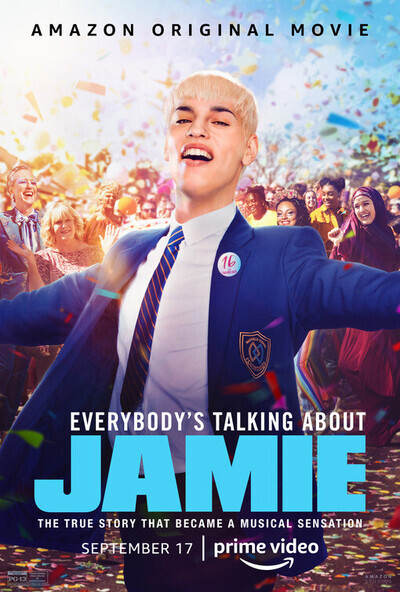