One of the saddest moments I’ve ever seen in a film comes more than halfway into Lili Fini Zanuck’s “Eric Clapton: Life in 12 Bars” (a rather unfortunate title given its subject’s severe problems with alcohol abuse). As one of life’s cruel ironies would have it, the plunge into sadness comes at what should have been a moment of total triumph.

It’s 1970. Eric Clapton has just returned to London after the Miami, Florida, recording sessions for the first album by his group Derek and the Dominos, an album that many admirers (this one included) consider the peak of his career as a songwriter and a recording artist. As Clapton fans know, the record is all about the pain he felt in harboring a long, mostly unrequited passion for Patti Boyd, the wife of his best friend, George Harrison. The album’s climax, “Layla,” surely one of the great songs in the whole rock canon, was derived from the Persian tale of Layla and Majnun, a famous romantic tragedy. Clapton’s love for Patti has all the makings of tragedy, yet now he’s managed to transmute it into great art—surely that will mean something to her.

Unfortunately, it does: the wrong thing. When he plays the record for her at his London flat, her reaction is paranoid. “Everyone will know it’s about me,” she thinks. She leaves abruptly, clearly signaling her displeasure. Clapton is devastated. “It didn’t work. It was all for nothing,” he recalls thinking. Photos of him that accompany this episode prove how much more effective film can be than written accounts. They don’t show him with any kind of wrenched, tortured expression. But there’s a look of stunned, almost unfathomable loss.

And this was only the prelude to another terrible blow. Three days later, Clapton’s close friend Jimi Hendrix died. Clapton recalls being inconsolable, saying he “cried all day…not because he’d gone but because he hadn’t taken me with him.”

At a key moment in narrating the Patti Boyd story, the film does something interesting. It flashes back to when Clapton was nine years old. Earlier, it related that he was raised by a couple who he thought were his parents but were actually his grandparents. His mother, Patricia, had him after a one-night stand and left him when she went off to live with the Canadian airman she married. When she returned to England when Eric was nine, he was told the truth and met her. But did she now want to be his mother? She didn’t, and rejected him with an almost unbelievable cruelty. (Something similar happens when she returns to his life when he’s a teenager. This Patricia is indeed a mom out of Greek tragedy.)

After age nine, we learned earlier, Clapton turned to art and music to “take the pain away.” Now we know what pain he was talking about. He was especially taken with African-American blues, with its basis in suffering, heartache and personal hardship. His grandmother recalls him staying up till 3 a.m. on school nights practicing guitar to the blues records he loved. When he started playing publicly as a teenager, people already recognized his technical brilliance and feeling for the material’s emotions.

He came onto the London scene at that magic moment when American blues went, seemingly in the space of a year or so, from being something cherished in England by a few gnarly cultists and pimply teenage enthusiasts to a worldwide pop phenomenon. Clapton was the subject of personal adulation from the first, and didn’t much like it. He played in the Yardbirds, but left when they were on the verge of having a pop hit. He found a congenial artistic home in the more purist precincts of John Mayall and the Bluesbreakers. But his real break-out as an artist came with the founding of the super-group Cream, with Jack Bruce and Ginger Baker.

The film does a good job conveying the excitement generated by that band as a live act, especially in San Francisco and Los Angeles. But though it produced some remarkable music, Cream’s success was short-lived. Personal frictions and the pressures of touring took their toll, and the deleterious effects of drug abuse became more pronounced.

The film goes through this rich period at an understandable dash, briskly covering the meteoric career of Clapton’s next super-group, Blind Faith, while missing entirely such things as his appearance in the Rolling Stones’ Rock’n’Roll Circus and the importance of the band Delaney and Bonnie to the formation of Derek and the Dominos, which also made use of Clapton’s great co-equal in the guitar gods pantheon, Duane Allman.

After Patti Boyd’s rejection of “Layla” and Hendrix’s death, Clapton went into a very steep tailspin, essentially staying at home in his Surrey mansion and shooting up heroin for several years. When he did emerge, in 1974, he resumed touring and recording, but replaced heroin with alcohol, which he says was far worse for him. The film includes several scenes of his embarrassing on-stage behavior during this period, when he would admit to being drunk and fans would heckle and throw things at him.

There was worse to come, of course, but it does seem like the death of his adored four-year-old son Conor, the result of an accidental fall in New York, really was what got Clapton to straighten out his life, which, after a new marriage and the arrival of other children, seems to have become as happy and settled as any demon-plagued artist could wish for. It’s certainly a welcome contradiction of the early death he once predicted for himself.

A footnote: This film’s release was preceded by news that it contains admissions of Clapton using racial epithets and voicing support for right-wing politicians back in the day. This it does, but in context the remarks come across as what they obviously were: the self-destructive ravings of a man temporarily out of his mind on drink, drugs and despair. Rather than his true feelings, these aberrations seem to reveal the exact opposite of those feelings. 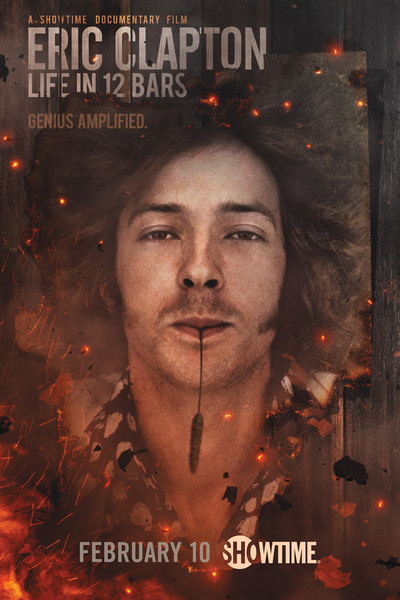