Enola Holmes (Millie Bobby Brown), the younger sister of Sherlock Holmes (Henry Cavill), returns in this cheeky, breezy sequel that's better than the original. The character has a better sense of who she is, and the movie spends less time explaining, and more time on action. The mystery at its center is inspired by a real-life event that is genuinely inspiring.

Enola is not a younger female version of her older brother, who, in this version, has the deductive ability of the Arthur Conan Doyle books but is younger and not as well established as in the books. She is her person, less analytical than he is and much more empathetic. She is observant and determined, and she has great fighting skills and a good command of mechanical physics. She also has enormous courage, both physical and moral. The first we see in this film is her back and then her feet and the hems of her skirt and petticoat as she is racing through the London streets, being chased by two Bobbies. She stops to address us, as she does with great charm and wit throughout. “Perhaps I should explain.”

And then we rewind to go back a bit, with Enola trying to establish her detective agency in London. “I was going to join the pantheon of great Victorian detectives. I would be his equal, worthy of the Holmes name, or so I thought.”

It does not go well. Potential clients say she is too young or mistake her for the receptionist. Some just get to the point: “Might your brother be free?” And then a young girl named Bessie (Serrana Su-Ling Bliss) comes into the office looking for her sister Sarah. There are advantages to Enola’s youth and gender. She can go undercover with Bessie as a new employee in the match factory where Sarah worked before she disappeared. Potential clients may underestimate Enola, but so do the people she is investigating.

The direction and editing match the lively personality of the heroine, and the mystery has several delightful twists. Enola is determined to be independent and has a hard time admitting she needs help. But it turns out that her case may be connected to the one her brother is working on. Her eccentric mother (Helena Bonham Carter) turns up to provide some assistance, some explosives, and some revision of her earlier advice to Enola to rely only on herself. She says Enola has become “strong, individual, but perhaps a little lonely. With others, you could be magnificent. Find your allies, work with them, and you will become more who you are.” And when she needs an emergency ballroom dance lesson, the handsome Lord Tewkesbury (Louis Partridge) is willing to oblige.

Brown, also a producer of the film, is ideal for Enola. Her asides to the audience are delightful, especially when she unsuccessfully tries to reassure us, with a slight blush, that she just happens to be in the park Tewkesbury walks through on his way to the House of Lords. Animated inserts show us some of what she is thinking and some flashbacks to her mother’s lessons tell us more of what has—and has not—prepared her for these challenges. She shows us Enola’s curiosity, frustration, determination, and vulnerability. We see her make mistakes and we see her learn to get help from others, and sometimes make mistakes in getting help from the wrong people.

The supporting cast is especially strong, with David Thewlis and Adeel Akhtar as police detectives tracking the same case and usually considering Enola either an obstruction or a suspect. I do not want to spoil any of the twists and surprises in the film by pointing to any of the other performers except to say that like Enola, the supporting characters can be overlooked or underestimated because of who they are.

The story pays tribute to a real-life historical moment that gets well-deserved recognition in a closing title card, and a mid-credits scene gives us the tantalizing arrival of a welcome new character. There are six books (so far) in the Nancy Springer series about Enola, and I hope her game will continue to be afoot.

Now playing in select theaters and available on Netflix on November 4th. 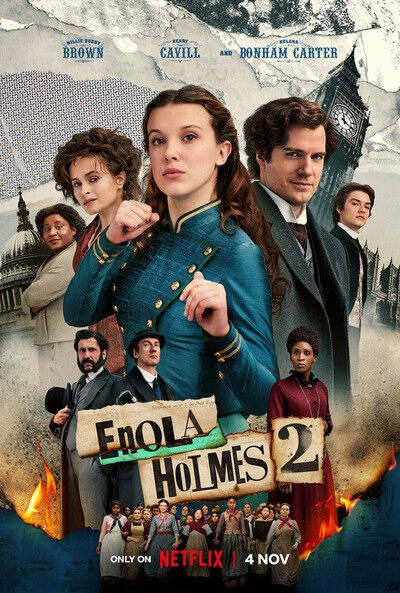 Rated PG-13 for some violence and bloody images.

Writer (based upon the "Enola Holmes Mysteries' book series" by)