Enlighten Us: The Rise and Fall of James Arthur Ray

If you espouse a belief that we only progress through challenge, what kind of responsibility must you take for the degree of challenge involved? Was the tragedy in an Arizona sweat lodge that killed three clients of motivational speaker James Arthur Ray inevitable given the human need to constantly up the risk to up the reward? And should Ray have been legally or morally responsible for what happened? The great thing about “Enlighten Us: The Rise and Fall of James Arthur Ray,” airing on CNN this Thursday night, December 1, is it doesn’t attempt to answer these questions in a straightforward manner. Director Jenny Carchman recognizes that there are no easy, satisfying answers in such a complex situation. Followers of “The Secret” star James Arthur Ray went into a plastic-encased tent in the middle of the Arizona desert and three of them never came out. It’s the very complexity of this situation that makes for fascinating TV, along with Carchman’s respect for all the players and a refusal to turn “Enlighten Us” into an "answer movie."

From his very first interview, Ray is a captivating subject. He pantomimes when he talks, taking a minor leap when he says the word “bounding” or pretending to color with crayons. At several points in “Enlighten Us,” he allows a peek behind the curtain. For example, there’s an amazing bit in which he talks about the impact of blocking his motivational speeches, how it works psychologically to keep issues of the past stage right and issues of the future stage left, because that’s how our eyes work when we’re reading.

“Enlighten Us” could have used even more of this deconstruction of the art of motivational speaking but Carchman allows it to come through what is basically a character study of a man seeking redemption. After the deadly incident, Ray served two years in jail—a number that seemed to satisfy nobody, as his victims’ families thought he should have gotten more while he thought he should have gotten none. His redemption arc, in which Ray tries to rebuild a career in which HE is the primary product, is interesting enough but it’s shadowed by the ghosts of those who died in Arizona, and a sense that Ray himself has yet to fully process what happened there. There are times when he suggests that what happened to him was a good thing because he’s now learning and growing through challenge—and I suppose there’s no other way to look at it that wouldn’t just send a human being into the fetal position. But it still leaves a bad taste to consider the deaths of others as something positive. Ray's comeback arc only gets “Enlighten Us” so far.

And that’s why the final act of Carchman’s film is so effective and harrowing. She turns her focus, for large portions of the documentary, to the survivors of the Sedona incident, allowing them to detail what happened beat by beat. A picture of a totally unorganized, dangerous event comes clearer, and the idea that Ray must bear some legal and moral responsibility for it is crystalized. Yes, they had done it several times before, but Ray was not just in charge on that day but in several areas of these peoples’ lives. They couldn’t look weak in front of him. They trusted him. And the final act of “Enlighten Us” returns the story to these people, humanizing them in a way that makes them relatable and understandable instead of the cable news habit of labeling them cult members. 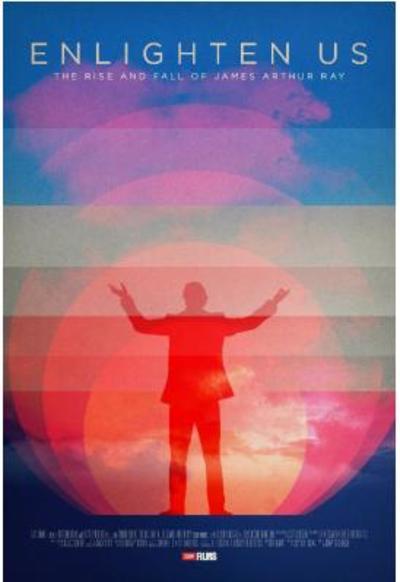 Enlighten Us: The Rise and Fall of James Arthur Ray (2016)