Someone must have said, “... like 'Ghost,' but you know, for teens!” when pitching “Endless,” Scott Speer’s shameless and embarrassingly vacant rip-off of Jerry Zucker’s wildly successful, otherworldly 1990 romantic drama. But I bet no one in that room expected the outcome to be quite this irritating.

Leaving cynicism aside, a sort-of remake of “Ghost” for an adolescent demographic is a decent enough idea in theory. At a time when romances and melodramas are unfairly and increasingly slighted and younger audiences on a superhero-heavy diet are starved for mature emotions dealing with loss and grief, why not rehash a tried-and-true formula with fresh Patrick Swayze and Demi Moore surrogates and a contemporary spin? Except, if you’re going to attempt that, you’d better know a thing or two about character development and give us flesh-and-blood personalities whose plights and dilemmas we can care about.

Ineptly shot and listlessly written, “Endless” is a far cry from possessing those basic qualities. What it instead has is an uncharismatic couple that consists of Riley (Alexandra Shipp) and Chris (Nicholas Hamilton), two California-based teenagers madly in love. In a rosy and sun-dappled prologue montage, the well-heeled Riley’s voiceover introduces us to her relationship with the spirited Chris, coming from more modest means. This opinionated, art-loving young woman, who apparently graduated as one of the top of her class, got into Georgetown Law and interned at the DA’s office, says falling in love and starting to go out with Chris is the most  important thing that happened to her that year, even though they don’t make much sense on paper.

Why it has to be emphasized that they don’t make sense together is anyone’s guess—they seem to see eye-to-eye often (apart from Chris’ affection for motorcycles, an overplayed hobby that Riley’s parents don’t approve) and it’s not like they are at an age where they have to consider big, serious steps like marriage. Nevertheless, trouble creeps into their idyllic romance soon enough. Riley receives her above-mentioned acceptance from Georgetown—her euphoric reading of the letter in her room gets captured by DPs Frank Borin and Mark Dobrescu in a stalker-ish, surveillance camera fashion, among the more puzzling visual decisions of the duo. And during an argument about his girlfriend’s future through which Chris feels free to mansplain that Riley should study art, not law, a careless moment in the car with Riley behind the wheel causes the collision that claims Chris’ life.

You can guess the rest of the playbook from here on out. Suffocating with feelings of guilt, Riley struggles to get back on track with her life while her parents act like the worst kind of rich movie villains, concerned only about saving their daughter from legal ramifications of the crash. A deeper, smarter movie would have explored the class divergence between Chris and Riley at this point. But not “Endless”—what could have been a heartbreaking avenue gets reduced down to Chris’ mom (Famke Janssen) yelling at Riley while crying by her kitchen table in startlingly bad hair extensions.

On the other side of existence, the confused spirit of the now-deceased Chris meets Jordan (DeRon Horton), a good-natured, manic-pixie-dream-ghost who volunteers to show his fellow in-limbo ghoul the ropes—you know, things like walking through objects, jumping between buildings and communicating with the living. Horton proves to be a welcome addition to the film that is otherwise burdened by consistently bad acting across the board—Jordan’s emotions are the only ones that register with some substance, even though his story from his living days ultimately gets brushed aside when Riley and Chris figure out a way to communicate with each other through Riley’s artwork.

With the help of some laughable effects, we indulge in the couple’s long-distance (for lack of a better word) relationship for a while as the duo picks up where they left off. Except, none of Riley’s friends believe her ghost story, trying to bring their grieving pal back to earth. Of course, Riley eventually proves to be smart enough to figure out the right course of action for herself. And thankfully, with the purest love in his heart, Chris knows enough to put logic before his own selfish desires by the finale of “Endless,” which keeps dragging on as if to live up to its title. Ultimately what this film proves is making a good romantic melodrama, however young-skewing, is no child’s play. It’s a serious lesson any filmmaker aiming to pull one off someday should take to heart. 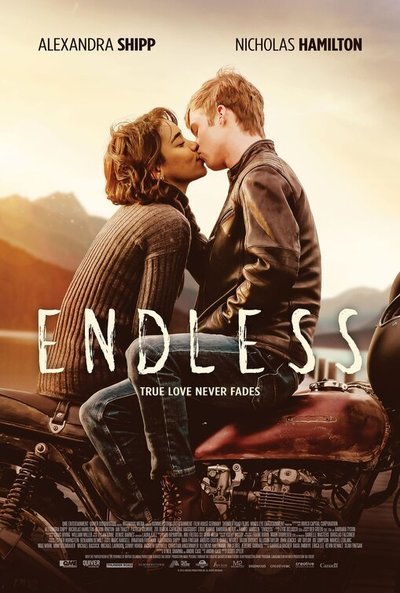