As the lightweight and welterweight WFA champion, MMA-fighter Cash Boykins (Stephen Dorff) has won every title there is to win except father of the year. Modeled after Conor McGregor, the bearded brawler with a high-skin fade, Cash is a foul-mouth bruiser, who until recently was absent from the life of his 18-year-old son Jett (Darren Mann). Our first glimpse of the pair sees Cash talking to Jett about the size of his package, as he walks to the octagon for his newest opponent. Cash equates masculinity with sexual prowess. He wears an “I f**k on the first date” shirt, entreats Jett to bang a stewardess, and without hesitation, spews homophobic quips.

Jokes and smiles aside, Cash and Jett also share a difficult bond, one stitched by the former’s history of physically and verbally abusing his son. With “Embattled” director Nick Sarkisov using MMA as a starting point, this muscular yet cheeseball sports drama concerns this father and son closing their open wounds.

It’s not clear who “Embattled” is for. Set in Birmingham, Alabama, Cash is your prototypical toxic masculine figure. And therefore, the all-too-clear villain. He tells Jett, who he’s training to be a fighter, to listen to Rob Zombie and the Deftones rather than Colbie Caillat. Cash despises any hint of weakness in his sons, and if he must, he’ll beat it out of them. When Jett refuses to stop listening to Colbie Caillat, Cash spars with him, and to the shock of everyone in the gym, purposely throws a cheap shot at Jett. The fighter also despises his other son Quinn (Colin McKenna). Diagnosed with Williams Syndrome, with Cash derogatorily referring to him as “Tard,” the outgoing Quinn has the tendency to ask forward questions. At school, he asks a group of girls whether they stick their tongues out at each other. At home, he quizzes Jett about Pornhub. Cash relegates Quinn into the unacknowledged son, and would rather he didn’t exist.

David McKenna’s jumbled script jumps from Cash’s tough love approach with Jett to subplots that miss their intended body blows, like as Jett’s home life. While Cash lives in a luxe mansion with his sensual new wife Jade (Karrueche Tran), and their young son Kingston (Jakari Fraser), his ex-wife Susan (Elizabeth Reaser), who Cash once abused, is forced to waitress to support Jett and Quinn. Through Susan, Sarkisov tries to hit upon the struggle that single mothers face when caring for developmentally challenged children. He also shines a light on the little-known Williams Syndrome, a rare genetic disorder. While Colin McKenna, the real-life son of screenwriter David, provides an assured performance, a tearful kitchen table scene between Jett and Susan buries these important themes under Mann and Reaser’s cheesy overacting.

There are other background arcs that mix school with romance. Jett is smitten with a girl named Keaton (Ava Capri), and he's also trying to set up a date between his mom and Quinn’s teacher, a wheelchair using army veteran, Mr. Stewart (Donald Faison). These subplots are underdeveloped and tonally incoherent, in the sense of them being very YA, and could be excised without anyone noticing. Considering Faison isn’t disabled in real-life, and the way the narrative fashions his character into a prop, one meant to elicit cheap putdowns aimed at Cash, the inclusion of Mr. Stewart is a case of outdated representation begetting zero inclusion. It’s a shame because Sarkisov took the time to thoughtfully cast not only McKenna, but other developmentally challenged adults in significant roles.

“Embattled” is strongest with its real-world critique of workers’ rights in MMA. Here, the fictional power brokers of the WFA avoid providing health insurance or retirement packages to their fighters, dissuade unionization, and limit revenue sharing. Much like the actual sport, it's a world where athletes are chewed up and spit out. But Cash is trying to change that. “Embattled” is also sharp when sussing out Cash and Jett’s toxic relationship, regarding how children suppress traumatic memories, and the unforeseen ways those haunting memories well-up to violence.

The prevalent themes collide when Cash and Jett are tasked with fighting each other in a PPV match. In the build-up to the bout, Sarkisov falls into the worst clichés. The director hampers his desired tension with cheap press conferences and flat dialogue, along with a half-baked montage of a training session with Claude (Saïd Taghmaoui), the only man to ever beat Cash. With claustrophobic handheld shots making for tight, yet unwieldy compositions, the actual work in the octagon is blood pumping. But the film’s message, that violence might only be healed through violence, is suspect, and undermines whatever feel-good emotions drape the final scenes. The father-son drama in “Embattled” might win some rounds, but the abundance of clichés leads to a loss overall.

Now playing in select theaters and on VOD. 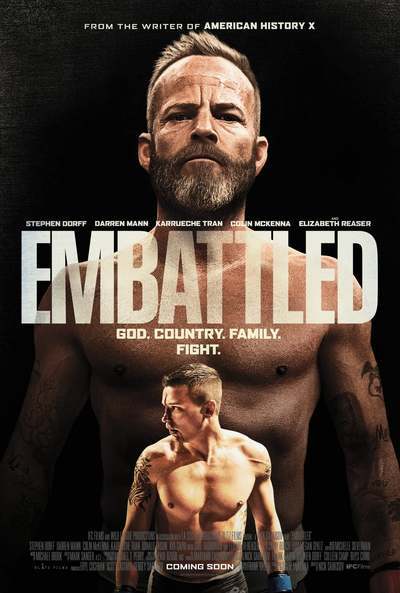