We may be in the endgame now, but an entirely different kind of superhero saga is just beginning with “El Chicano.”

Prowling the streets of East Los Angeles on a motorcycle by night, his black leather mask and gear obscuring his true identity, he’s a Mexican-American Batman. And in the feature debut from director and co-writer Ben Hernandez Bray, he doles out a particularly brutal brand of vigilante justice.

Working alongside veteran screenwriter Joe Carnahan, who’s made his name with this kind of brash, muscular storytelling in films like “Narc” and “The Grey,” Hernandez Bray tries to get his arms around a lot at once. Quite often, he’s successful.

“El Chicano” takes place in a contemporary L.A. that’s steeped in traditional Mexican folklore. It’s about understanding your place within your biological family while also grasping how you’re viewed within a larger cultural community. And it’s at once melodramatic and gritty, beginning as it does with this mysterious stranger hovering over a tombstone at night, his blood mixing with the pouring raindrops that saturate the engraved words “never forgotten” while a police helicopter circles noisily overhead.

Sometimes, the operatic aspirations and tonal extremes clang. It can be too much, when the inherent drama of this story might have been enough. But at the center of it all is the always charismatic Raul Castillo as LAPD Detective Diego Hernandez, whose investigation of a drug cartel massacre forces him to find the truth about his deceased twin brother’s past. Castillo’s performance as a charming yet terrifying husband and father in the dreamy indie drama “We the Animals” was among last year’s highlights. Here, he shows the same ability to juggle various disparate traits, although you’ll wish he had the opportunity to play a more richly developed character.

At the film’s start, we see a flashback to 20 years ago when twins Diego and Pedro are roaming the streets with their best friend, nicknamed Shotgun. They have contrasting role models in the swaggering gang members who rule the neighborhood and the stern police officer (George Lopez, surprisingly good in a rare dramatic role) who constantly keeps an eye on them. In between, they catch a thrilling glimpse of a figure who represents both good and evil at once: the mythical El Chicano, who leaves his ominous, stenciled mark on sawed-off stop signs before exacting his revenge. He’s a bogeyman, we’re told—a “ghetto Grim Reaper.” It’s clear that this enigmatic figure has fascinated Pedro and frightened Diego at their young, impressionable age.

Fast forward to the present day. Castillo plays the adult Diego, who’s now patrolling the same streets he’s known since childhood as a police detective (and Lopez’s character is now a captain and his supervisor). Pedro (also Castillo, briefly) took the opposite path, doing prison time for various drug and gang crimes before taking his own life. And Shotgun (a slickly menacing David Castaneda) is now a stylish, blonde pretty boy who lives in Malibu, enjoying the fruits of his ill-gotten gains as a higher-up in a powerful Mexican drug cartel.

The discovery of a bunch of dead bodies in a warehouse causes all of their pasts to resurface. Diego’s investigation eventually will take him down paths that suggest his brother may not have killed himself after all—and that Pedro may not have been on the wrong side of the law all this time. “El Chicano” also introduces the idea of Mexican reclamation—of taking back California and the Southwest, of “pura sangre” or pure blood. It’s a fascinating, defiant notion at a time when the United States has become an increasingly inhospitable place for our neighbors to the South. And it ultimately forces Diego to contemplate what it means to him to be both Mexican and American, to embrace both the dark and the light sides of his personality, and to thrive within the potential of a thrilling gray area.

Hernandez Bray’s film similarly functions most effectively when it explores the dangers of moral ambiguity, rather than remaining within the comfort—and cliché—of ideological extremes. 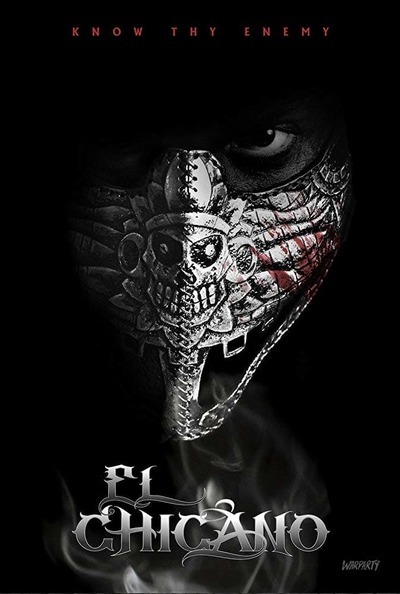