The very funny stage routine of Filipino-American stand-up comic Jo Koy is unevenly brought to the screen in “Easter Sunday,” with a lot of jokey family conflicts and some slightly less jokey encounters with menacing guys with guns. It is not surprising that the film's best moments are essentially Koy on stage telling jokes, and the second-best moments are Koy interacting with other top comics, Jimmy O. Yang and Tiffany Haddish. Everything else is a distant third.

Koy plays Joe Valencia, an LA-based stand-up comic and would-be actor best known for a series of beer commercials with the catchphrase “Let’s get the party started, baby!” That job has ended and he is hoping to be cast as the wacky neighbor in a new sitcom so he can make enough money to support his family. He does well in the audition, but they won’t give him the role unless he will perform with an exaggerated accent, similar to the conflict faced by Aziz Ansari on “Master of None.” His agent, Nick (director Jay Chandrasekhar) urges him to do whatever they ask.

That is nothing compared to the pressure from Joe’s mother, Susan (Lydia Gaston) in the Bay Area, who insists that he visit her for Easter with the family. Joe also realizes he has not paid enough attention to his teenage son, Junior (Brandon Wardell), so the two of them drive up to Daly City together.

Joe’s cousin Eugene (Eugene Cordero of “The Good Place”) has taken the $20,000 Joe gave him to buy a taco truck and instead bought something called a Hype Bus. The loan shark who provided the cash for inventory (Asif Ali as Dev Divine) insists on being repaid immediately. Susan and her sister, Joe’s Tita Theresa (Tia Carrere) are not speaking to each other but speaking nonstop to everyone else about their feud. And Nick keeps calling about the job, finally telling Joe he has to fly back to LA immediately for a meeting with the showrunners. Comic chaos ensues.

I love Jo Koy’s stand-up and highly recommend his story about his mother’s response when he loses his keys. Like all great stand-ups, he is brilliant at creating vivid characters on stage with his exaggerated posture, facial expressions, and voice. The character he plays here has a more limited range, mostly looking frustrated or harried. At Easter services, after a silly encounter with the priest who wants help with his show business career, Joe ends up in front of the congregation and can’t help going into a stand-up routine about Easter.

The plot contrivances about Eugene’s predicament with the loan shark, a valuable stolen item, and the updates from Nick (who always ends a call by saying he is losing the cell signal) get tedious, because they don’t play into Koy’s strengths as a performer or the setting’s potential for “the more specific a story is, the more universal it is” category. Eugene says, “Family is mad complicated” and that is about as insightful as it gets until the hug-fest ending. Anyone who is second or third generation will identify with the tradition vs. assimilation dynamic and the passionate loyalty to members of the community who have become famous. And anyone who has a family will identify with the generational conflicts over what constitutes success and the importance of security.

Anyone who is not Filipino will enjoy the glimpses of details of the culture, those that are distinctive (balikbayan boxes) and those that are their version of the universal (food = love). Anyone who is Filipino, like the family I sat with at the screening, will have a whole extra level of delight at representation, not just of the ethnic details but of the powerhouse cast of Filipino actors. Koy has said in interviews there were years of rejection of this film because studio executives did not think it was relatable. Carrere has said that after 40 years in the business, this is the first time she has been cast as her authentic ethnicity. I wanted to see more of Elena Juatco, who brings enormous vibrance and personality to a small role, and look forward to more from Wardell and Eva Noblezada, both enormously appealing in the tricky roles where subtlety has to balance out the heightened emotions of the adults. The entire cast is excellent, including a surprise Filipino guest star. It's a pleasure to see their jubilance in bringing their culture to screen, which shines even in the script’s weakest moments. 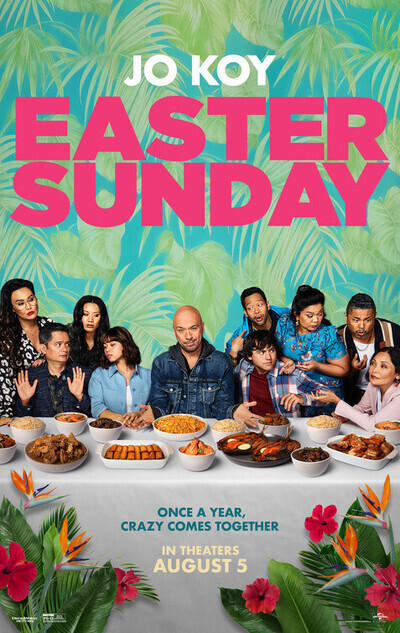 Lou Diamond Phillips as Himself