Earwig and the Witch

The computer-animated Japanese kiddy fantasy “Earwig and the Witch” has a fairly low bar to clear, being a new anime produced by Studio Ghibli, and directed by Goro Miyazaki, son of studio figurehead and anime pioneer Hayao Miyazaki. “Earwig and the Witch” is the second Ghibli adaptation of a Diana Wynne Jones novel after “Howl’s Moving Castle,” and is generally similar to other Ghibli films (imagine a more timid “Kiki’s Delivery Service”), so you’d be forgiven for thinking that much of this new movie’s visual style—and narrative beats, character types, and general mood—seems familiar.

There’s nothing new about the generic misadventures of plucky orphan Earwig (Kokoro Hirasawa), the apprentice to stingy witch-for-hire Bella Yaga (Shinobu Terajima), and the biological daughter of mysteriously absent rocker (Sherina Munaf). And while being conventional isn’t necessarily deadly, “Earwig and the Witch” is an underwhelming Ghibli retread thanks mostly to its inexpressive 3-D animation style, as well as Goro’s relative lack of animation experience. (Even Hayao initially disapproved of Goro’s taking on “Tales from Earthsea,” Goro’s directorial debut, though he later offered some guarded praise: “It was made honestly, so it was good.”)

“Earwig and the Witch” isn’t visually dynamic enough to be more than a lumpy cover version of Hayao’s greatest hits, which is especially disappointing since so much of the movie is about the frustration one feels when your parents seem to either not notice or care for you beyond a point.

That said: Earwig is different than Annie, Oliver, and so many other fictional orphans before her, in that she doesn’t seem to care about re-uniting with her mom so much as she wants to control her environment. She’s got everybody at the orphanage wrapped around her little fingers, so she’s not initially thrilled when she’s adopted by Bella Yaga and her reclusive warlock partner Mandrake (Etsushi Toyokawa). Earwig’s tune only changes slightly once Bella Yaga puts her to work, completing menial witchy tasks, but never learning spellcraft fundamentals.

There’s no urgency to Earwig’s studies or development as a witch, no real conflict or ticking clock elements of suspense. Earwig also doesn’t develop or progress much as a character: she rarely thinks about her orphanage buddy Custard (Yusei Saito), though she does sometimes use his name when referring to her talking cat Thomas (Gaku Hamada). That Freudian slip might be more interesting if Earwig seemed to have some kind of an inner life, based on the evidence of her physical gestures and on-screen behavior.

Here’s where the design and animation of “Earwig and the Witch” becomes a real make-or-break point: it’s easy to admire Katsuya Kondo’s character designs and Yuhki Takeuchi’s art direction (especially his background art), but harder to find much emotional resonance from the movie’s stiff computer-generated animation, whose supervision is credited to Yukinori Nakamura (computer graphics) and Tan Se Ri (general animation). Characters’ emotions are often reduced to inexpressive, but broadly over-accented gestures or features, like Earwig’s over-arched pencil brows, or Bella Yaga’s Medusa-like curls. These details suggest a lot without ever being really expressive, possibly because of the limitations of the movie’s made-for-TV budget.

The most striking images and scenes in “Earwig and the Witch” are the ones where characters are represented as parts of their environment. Children hidden under bed sheets as they skip up a spiral staircase, giddy adults stooping over clusters of excited orphans, or Earwig’s occasional daydreams about Mandrake (who is often shown hiding behind a newspaper, or his bedroom walls), that sort of thing. Problems inevitably arise whenever characters’ facial expressions and physical movements have to convey their respective characteristics. Which is sadly not surprising since all three of Goro’s features are visually flat, including “From Up On Poppy Hill,” a project that was initially planned and scripted by papa Hayao.

Goro’s movies all seem to lack his father’s personal touch, possibly because they’re very much cast in the fantasy mold that Hayao spent decades perfecting. Goro’s feelings of comparative inadequacy aren’t exactly a secret either—he told the L.A. Times that there’s a “huge gap in sheer ability” between himself and his father—making it easy to read “Earwig and the Witch” as semi-autobiographical, especially given how often Mangrove sequesters himself behind his cottage’s bedroom walls. (“For Goro, Hayao Miyazaki is not a father but rather a tall wall,” says “Earwig” producer Toshio Suzuki in the above-quoted 2013 L.A. Times piece)

Still, deep readings of “Earwig and the Witch” are only so useful given how dramatically inert the movie often is. This may be Goro Miyazaki’s most eccentric feature yet, but it’s also his least engaging. “Earwig and the Witch” doesn’t move the way it should, and that’s lethal when your last name is Miyazaki.

In select theaters today, February 3rd, and on HBO Max on February 5th. 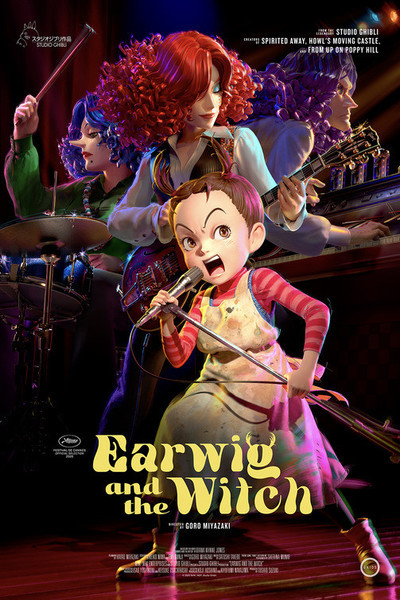 Etsushi Toyokawa as The Mandrake (voice)