The most interesting thing about “Dying to Survive,” a new Chinese drama about one man’s struggle to profit and then preach about healthcare reform, is its familiarity. “Dying to Survive” brings to mind a handful of American movies—especially “The Dallas Buyers Club”—about antiheroic figures whose extra-legal, but super-moral activities are only ostensibly uplifting. I say “ostensibly” because these types of stories are incredibly difficult to pull off.

Still, what makes “Dying to Survive”—a big critical and box office hit in China—stand out is how a different setting necessarily changes this type of story’s meaning: this isn’t just a message movie about personal uplift, it’s a propagandistic affirmation of self-effacing utilitarianism. After all, “Dying to Survive” is not about one individual’s struggle to prove his emblematic resilience—it’s the story of a selfish man’s quest to reform and re-integrate into society. I’d have an easier time accepting the trite, asked-and-answered conclusions that director Muye Wen and co-writers Jianu Han and Wei Zhong lead viewers to if they were more adept at tugging at viewers’ heart-strings.

“Dying to Survive” starts off with some promise thanks to its initial focus on Yong Cheng (Zheng Xu), a deadbeat divorcee who’s doing good business selling Indian-imported herbal aphrodisiacs. Nobody respects Cheng, because Cheng is too poor and stubborn to do anything but pout and smoke. He’s also got a violent temper that the filmmakers choose to overlook, despite some tentative acknowledgment: during a meeting with his (understandably) estranged ex-wife Ling Cao (Beibi Gong), Cheng tries to punch his son’s mom after she begs him to take some money and sign some papers that will allow their son to study abroad in Europe (Spoiler Alert: Cheng doesn’t sign!).

Luckily (for Cheng’s pride), Cheng finds another solution to his pressing money problems: Lu Shuoyi (Chuanjun Wang), a socially awkward sufferer of Chronic Myeloid Leukemia (CML), shows Cheng how he can make money by smuggling Glinic, a seemingly potent (but illegal) anti-CML treatment, from India into China. This for-profit scheme soon pays off (for Cheng) and makes it so that Chinese CML patients—most of whom cannot afford to pay for legal CML treatments—can be treated without going broke.

Cheng also forms a network of accomplices who collectively make him want to continue drug-smuggling for the greater good. “Dying to Survive” is, in that way, more about Cheng’s expanding sense of empathy than either healthcare reform or life with CML. Under-developed supporting characters, like exotic dancer/CML advocate Sihui Lee (Zhuo Tan) and Pastor Liu (Ximin Yang), are just the helping hands that give Cheng the boost he needs to stop thinking about only himself.

Wen and company’s stifling focus on Cheng inadvertently reveals the reductive simplicity of this type of feel-good entertainment: you can either be cynical and selfish, or care-free and selfless. There’s no room for ambiguity in a moral tale that inevitably concludes that other people’s lives are only important if they help to motivate one slovenly man to improve the quality of his unfulfilling, solitary existence.

That familiar character arc wouldn’t be so bad if Wen and his two co-writers didn’t focus so much on plot to establish Cheng’s character and investment in his Glinic-slinging colleagues. Wen and his collaborators don’t even slow down long enough to include the sort of wacky incidental details that might have driven home establishing scenes where desperate CML patient Hao Peng (Yu Zhang) and shady rival Glinic salesman Changlin Zhang (Yanhui Wang) are both chased down and beaten up before even they team-up with Cheng.

By streamlining Cheng’s story, the makers of “Dying to Survive” leave no room to question the motives of characters like Bin Cao (Yiwei Zhang), Ling’s current husband and the beat cop who astonishingly declares his intention to stop Cheng’s operation: “It's evil to sell counterfeit drugs. I feel duty-bound to make it right.” How am I supposed to feel good about cheering for the good guys when the bad guy isn’t even credibly bad?

I will say this: Xu is good enough at playing a garden-variety mini-mogul, the kind who does most of his arguing with a squint, a few shoulder rolls, and some expressive waves of his dominant hand. If there were awards for Best Acting with a Cigarette, Xu would surely be a contender (if it’s any consolation: Xu did win the Best Actor prize at last year’s Golden Horse Awards, the Chinese equivalent of the Oscars). Cheng’s transformation may ultimately be unbelievable, but he, like the rest of us poor slobs, has his moments. 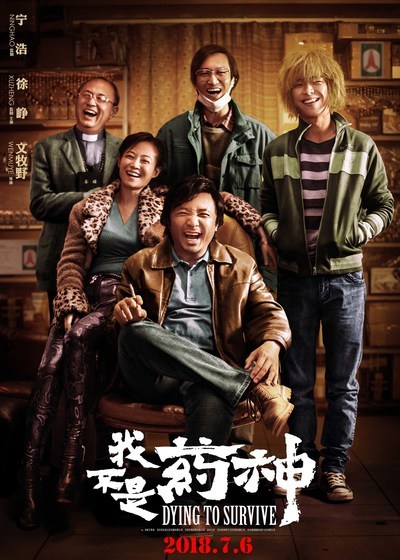