You have seen this story before. Every few years, a film like “Dukhtar” makes its way to cinemas, usually through the festival circuit. These films are set in regions full of strife, perhaps torn apart by war or terrorism. They feature young protagonists whose lives are in constant danger, coming of age despite their societies’ regressive mores. And by depicting the protagonists’ harsh lives, these films attempt to portray the perennial brutality for anyone living in such an environment.

Films like “Come to My Voice” (Turkey, 2014) or “In Bloom” (Georgia, 2013) transcended this template to excel as immersive narratives. However, “Dukhtar,” a Pakistani drama from 2014, always feels hamstrung by its tropes and fails to cohere into anything novel or engaging.

Directed by first-time filmmaker Afia Serena Nathaniel, who also served as writer and producer, “Dukhtar” is the tale of Zainab (Saleha Aref), a precocious little girl, and Allah Rakhi (Samiya Mumtaz), her protective mother. They live in the mountains of northern Pakistan, and are circumscribed by the men in their immediate surroundings. Daulat Khan (Asif Khan), Allah Rakhi’s much older husband, pledges Zainab in marriage to a rival headman. But Allah Rakhi cannot bear to see her daughter go through the pain and terror she has had to undergo in her life—she was married to Daulat when 15—and thus they flee, sparking off a frantic chase behind them, from both the offended husband-to-be and the angry father. They cross paths with Sohail (Mohib Mirza), a trucker who reluctantly takes them on board and becomes a target with them.

There are some scenes stereotypical to fugitive road trip movies—you know them already—and unfortunately “Dukhtar” ticks all those boxes. An oh-so-tense sequence where the antagonists find the vehicle harboring the protagonists and check it thoroughly, but fail to find who they’re looking for? Got it. A pitstop at a public place, in this case a roadside restaurant, only to discover the radio broadcasting news about the missing people? Got that too. A vital moment of the chase depending on whether the creaky getaway car will start or not? Right here. The protagonists staying up by a campfire at night and narrating their sombre backstories? “Dukhtar” has you covered.

The rampancy of clichés might have been okay were “Dukhtar” slightly more self-aware. But this is the kind of film where a henchman will look into the thundering sky and portentously say, “There’s a storm coming.” If the script traversed these obligatory checkpoints but then offered something deeper, one could forgive the clumsy legwork performed to get there. Yet, in Nathaniel’s screenplay it feels like the people are movie characters and their lives little scripts, when in fact it should be the other way around.

Skilful direction could overcome these handicaps, and has done so in the past, but there is little flair to the filmmaking in “Dukhtar.” From an early scene wherein a one-dimensional supporting character and Zainab play house to the finale in a crowded street in Lahore, the compositions are unimaginative and the mise en scène right out of film school. Towards the end, when one character’s life is in danger, you get the triple whammy of soft focus, plaintive music, and the distant echoes of other characters’ voices. Generally Nathaniel treats the screen like a stage, with all of the stasis that brings but none of the immediacy. After all, the viewers are still a camera away from people on screen.

The acting tries to rise above the page and nearly succeeds. Mumtaz is the film’s emotional pillar as a mother who has given up on her dreams but will not let anything impede her daughter’s flights of fancy. She conveys a lifetime of hurt and regret with her eyes, yet every her daughter’s actions make her smile or laugh, one gets a tangible sense of what might have been. The work by Mirza, a heartthrob in Pakistan, is also commendable. Although his arc is predictable, his natural charisma and emotiveness render the journey entertaining.

The best thing about “Dukhtar” is Armughan Hassain’s cinematography, which recognises the uniqueness of the stunning on-location shooting. It fills the screen with barren terrain, streams that could be brooks, and the dustiness of mountainous highways.

“Dukhtar” is indefatigably earnest in the tale it wishes to narrate, the world it wants to show, and the society it aims to critique. It is an unabashed love letter to Pakistan itself, warts and all. Yet, as a film, it’s too by the book to earn a spot of honor in any book, and that’s disappointing. 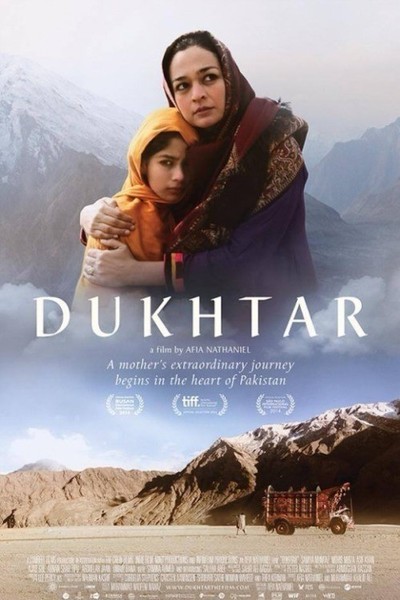