Some movies tell you where their story is going. There’s little surprise left when the viewer can predict a turn or even guess the dialogue. The other side of that is the kind of movie that’s so unlike anything you’ve seen before, you can’t possibly fathom what’s next. Many good-to-fine movies exist within those two extremes, including a film that starts heading in one direction and ends up surprising us. That was the sensation I got when watching John Carlucci and Brandon LaGanke’s co-directorial effort, “Drunk Bus.” At first, I felt like I knew where the story of a lovesick guy with a terrible dead-end job was headed. I continued to have that feeling when a person of color, who dispenses advice to the white guy, entered the picture. I braced for impact because I thought we were headed towards that shallow trope, but thankfully the crash never came. “Drunk Bus” had a few more surprises still left in store.

Written by Chris Molinaro, “Drunk Bus” concerns Michael (Charlie Tahan), a young man with a broken heart who has not gotten over losing his long term relationship with Amy (Sarah Mezzanotte) after they graduated college. So, he’s stuck in the same job he had in college, a bus driving gig, most notable the so-called “drunk bus” shift shuttling kids from campus to the town’s bars. After one particularly bad night, Michael was beaten by a passenger, so his boss hired security in the form of Pineapple (Pineapple Tangaroa), an intimidatingly tall man with lots of Maori face tattoos and piercings. Not only does Pineapple protect his skinny charge from the unruly drunk college kids on the bus, he befriends Michael, giving him life lessons and encouraging him to move on from his breakup. But eventually, Michael learns his new friend is also going through issues of his own and it throws their friendship into question. Making matters worse is Amy’s back in their Ohio town from New York, looking to meet up with him once again.

Despite its simple premise and opportunities for silly college antics, “Drunk Bus” ends up being a much more sober movie about trust and healing. Tahan really digs into Michael’s inability to stand up for himself, seemingly lowering his voice and slouching in his driver’s seat when he would just like to disappear. Then comes Pineapple, and this odd couple plays into a bit of those Laurel and Hardy-like contrasts for laughs, but also for some true moments of sincerity. Despite his intimidating look, Pineapple befriends almost everyone who crosses paths with him, even some of the guys who start a fight on the bus. He knows how to talk and connect with people in a way Michael has yet to learn, and likely won’t, if he continues to stay in the bus’ driver’s seat.

Part of the fun of “Drunk Bus” comes from the truly bizarre scene-stealing members of the supporting cast. Michael’s roommate, Josh (Zach Cherry), is a former bus driver who only manages to be annoying or wreak havoc, possibly both. Another colorful character, whose name is shortened to FU Bob (Martin Pfefferkorn), is a grouchy wheelchair user whose main response to people, Michael included, is to give them his middle finger and curse at them. Then there’s Pineapple’s weed guy, an unhinged music fan who calls himself Devo Ted (Dave Hill), whose loyalty only lies with the band Devo. His obsession is also why there’s a few Devo songs in the movie.

Ultimately, “Drunk Bus” is a sweet, late bloomer coming-of-age comedy about learning to let go of toxic relationships and embracing new people in your life. Directors Carlucci and LaGanke worked with cinematographer Luke McCoubrey to make Michael’s walled-in world between his apartment with Josh and a disgusting old campus bus seem as sorry as possible, almost as if we were trapped in his depressed perspective with him. And with Tahan and Tangaroa’s vulnerable performances at the wheel, this comedy ends up being more than just a college wasteland. It becomes something heartfelt yet funny—a truly hard balance to strike—but “Drunk Bus” pulls through for our enjoyment. 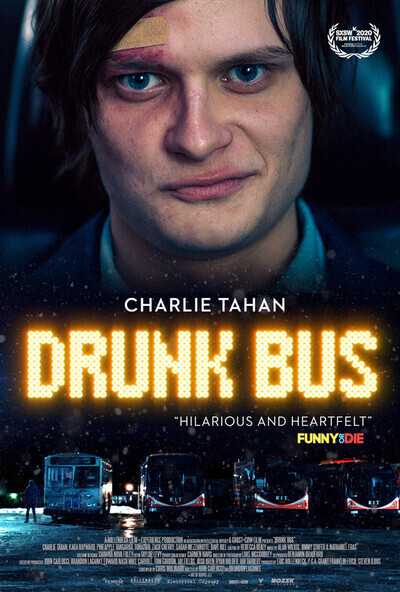