Oh, if only John Delorean was as good at making cars as he was in escaping civil and criminal charges. But he was not, and that is why his namesake car is best remembered as a time machine in “Back to the Future” and he is best remembered, or most remembered, as the upstart who became the youngest division head of stodgy General Motors, left to found his own car company, and then, desperate for cash, tried to save it with a cocaine deal that turned out to be a sting operation conducted by the FBI.

Earlier this year, we had “Framing John Delorean,” a meta-documentary with re-enactments and commentary about and within the re-enactments. And now we have “Driven,” a feature film telling the story from the point of view of the FBI informant who helped Delorean make the drug deal. The problem is that the movie seems to see them both as endearing rogues in difficult circumstances instead of selfish swindlers, and the perspective of an ancillary character is just not as interesting as what is going on literally across the street.

“Driven” is an odd or maybe ironic title because that man, Jim Hoffman, has a very un-driven demeanor, coming across as disarmingly impromptu, maybe some goofy charm. But he later admits he has “flattered to deceive,” and as we will see, the goofiness is strategic and the deception is the reason.

Jason Sudeikis specializes in characters hiding canniness with slightly sleazy charm and so he is ideally cast as Hoffman, who is well aware that being underestimated is what gets people to confide in him, and of all contraband goods, secrets can be the most valuable.

“Stay calm, stay honest, look them in the eye,” Hoffman is warned as he walks into a courtroom. “Don’t joke or flirt with the jury.” We might assume the warning is coming from his defense attorney. But he is not, and he is not the one on trial.

We go back in time and see Jim, a pilot, being flagged down by that same man (Corey Stoll as FBI Special Agent Benedict Tisa). Hoffman’s wife and children are in the plane along with some cargo: a lot of cocaine.

But Tisa does not arrest Hoffman, perhaps because the plane was parked for three days in Florida out of his control while he took his family to Disney World after delivering Bibles (he says) to South America. So he walks away from drug charges and from being a pilot and promises his wife, Ellen (Judy Greer), they will make a fresh start.

In their new home, Hoffman is tinkering with a recalcitrant Pontiac GTO, and his neighbor comes over to take a look under the hood. A tweak in just the right place and the engine turns over smoothly. The tall neighbor with a poof of white hair explains, casually, “I designed it.” He is former General Motors wunderkind John Delorean (Lee Pace, perfectly capturing the steel underlying his surface geniality).

The Hoffmans are dazzled by the glamorous Deloreans, and delighted to be asked to a party at their home, which turns out to be a sales pitch for potential investors in Deloran’s new car company, featuring a signed check from Johnny Carson. “Every car in America is dying the minute it leaves the factory,” Delorean tells Hoffman. He is going to design a car so safe and durably built that it will last indefinitely. “It’s the future.” But in case we don’t know how disastrous those investments will be, we are reminded by the sales pitch: “Any money you’re not putting into Delorean, put into Betamax.” Like the Delorean design, the Betamax was a better product wiped out by a competitor with less vision and quality.

When his car company gets in trouble, Delorean needs cash quickly. Delorean likes being a rogue and an iconoclast, and doing a quick multi-million dollar drug deal to save the car of the future seems like a win-win. He knows his new friend Hoffman has some drug connections, so asks him to help set it up.

For reasons Delorean does not suspect, this deal could get Hoffman out of a hole, too. Even though we know the outcome and it is hard to root for either one of them, the scenes of putting the deal together are tense and suspenseful.

In his previous film, “The Journey,” screenwriter Colin Bateman told another story about the relationship of two sometimes aligned, sometimes antagonistic real-life characters, the men who negotiated the peace agreement in Northern Ireland. Here he give us two who are very different yet have a great deal in common. They are both willing to weaponize their natural charm and say whatever it takes to get what they want, especially when it comes to staying out of trouble. Bateman has a touch of that himself, and the end of the film shows us that, like Hoffman and Delorean, he will not let the facts get in the way of a good story. 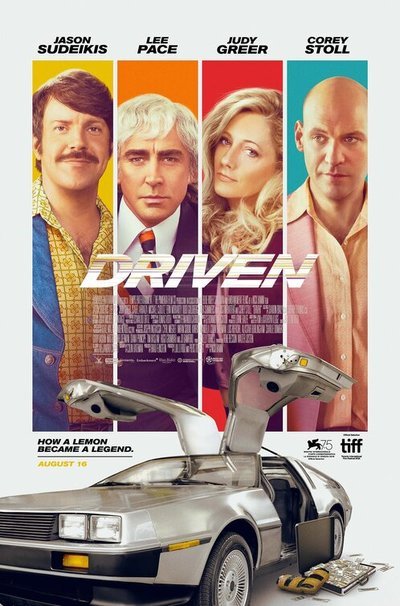