Supernatural horror flick "Don't Knock Twice" is disappointing because its creators don't do anything interesting with a fairly novel theme: a mother's possessive love for her estranged daughter. In the film's most compelling scene, "Battlestar Galactica" star Katee Sackhoff tells her character Jess' daughter Chloe (Lucy Boynton) that she loved her "since the moment I saw you." It's an emotional moment, and the key to the film: Sackhoff can't bring herself to look at Boynton for long because Jess knows she is guilty of neglecting her daughter.

But wait, there's more: Jess rattles off a list of times when she knew she loved her daughter. This should be the moment where the conversation gets dark; it should say something substantial about Jess' needyiness, something that links the scene to a later moment where she screams that Chloe "belongs." Because really, if you look past the lame-o, sub-"The Grudge"-style ghosts and the unfortunate twist ending, you'll find that "Don't Knock Twice" is about a maternal monster, though it takes some time for that dynamic to become clear. Unfortunately, "Don't Knock Twice" never goes anywhere interesting because its creators don't really know what to do with their characters.

For starters, we don't really know much about Jess and Chloe. All we know about Jess is that she's an American sculptor of some means married to wealthy lawyer Ben (Javier Botet)—and she used to have a substance abuse problem that drove Chloe into foster care. Now that Chloe is a teenager, Jess wants to reconnect ... though why it took so long is unclear. We don't know much more about Chloe: she's got a boyfriend named Danny (Jordan Bolger) and has a tendency to make bad decisions, like when Danny talks her into knocking twice on the front door of an abandoned home that's rumored to be haunted by a witch.

Let's step back a moment: why would you do this? Granted, there's more to this story than the initial set-up lets on, as we eventually learn that Chloe has a personal connection to the house's former inhabitant. But let's say you're watching this scene and trying to make sense of it as it happens, at a crucial moment when you're being dared to suspend your disbelief. Why wouldn't I throw my arms in the air when a pair of teens knock twice on a haunted house's door? It's right there in the title, which clearly indicates that knocking twice is forbidden! I mean, yes, by all means, kick the plot off as fast as you can, but come on! Sure enough, one scene later, a completely forgettable ghost who walks on all fours and communicates by croaking like a frog trapped in a vice invades Danny's apartment and abducts him.

So, Chloe runs screaming into her mother's arms. Apparently all it takes for a skeptical teenager to get over years of abandonment and neglect is a missing boyfriend and a not-so-spooky ghost. Anyway: Jess and Chloe bond somehow, and like everything else in "Don't Knock Twice," their strained relationship is rather unbelievable. The only thing holding this film together, apart from Sackhoff's characteristically thoughtful performance, is the insinuation that there's more going on with Jess than we know.

Unfortunately, this strategy of letting the film's characters slowly reveal their idiosyncrasies doesn't really work when the nuances and foibles in questions are insubstantial. Jess has a thing about owning other things. You'll note that she says that she owns half of her home with Ben, a qualification that stands out after Chloe insists that Ben probably owns their house. And you'll note that when Chloe insists that she's being haunted by a Baba Yaga, her version of the story involves a human familiar, identified as a "slave." It's that "slave" part that should lead "Don't Knock Twice" down a far more interesting route: Jess also thinks of her daughter as a thing, something she once had but has since lost. Regaining ownership of her daughter drives her, so by the moralistic standards of the horror genre, there should be repercussions to her actions.

Too bad the makers of "Don't Knock Twice" don't really know how to make Jess and Chloe's relationship strong enough to be inevitably worth tearing apart. There's nothing here that indicates that these two actresses, let alone the supernatural threat that their characters face, have a relationship that exists off-the-screen. Jess and Chloe make decisions that are consistently ludicrous and their secondary relationships are equally under-done. There's an interesting movie here, buried underneath a mountain of weak jump-scares and illogical twists. But the makers of "Don't Knock Twice" never successfully flesh out their characters as people, leaving viewers to roll their eyes whenever characters open the wrong door. 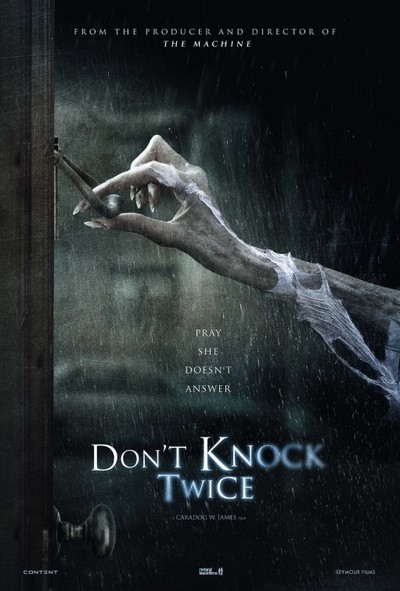