What are the odds that a second group of people would be foolish enough to break into Stephen Lang’s home to try and steal something valuable to him? That’s the unlikely premise of “Don’t Breathe 2,” which can’t quite match the novelty and thrills of the surprise-hit 2016 original.

Uruguayan filmmakers Rodo Sayagues and Fede Alvarez are wise to expand on the universe of the first film, which took place entirely in and around Lang’s character’s home. The clever idea was that he was blind, and in theory an easy target for burglars. Little did they know they were dealing with a fearsome Gulf War veteran who was intimately familiar with every square foot of the place and whose other senses were heightened, making him an unstoppable killing machine. Alvarez and Sayagues co-wrote the script for the first “Don’t Breathe” with Alvarez directing; this time, they share co-writing credit with Sayagues directing.

They couldn’t just remake “Don’t Breathe.” That would be no fun and a waste of everyone’s abilities. Instead, they take Lang’s Norman Nordstrom and provide him with a reason to leave the house. The results are nuttier and more savage but never as tense or tight. And it’s harder to root for him to succeed in taking down his invaders, knowing what we know from the first film about his brutal past. Still, there’s some style on display here, including one impressive, long tracking shot through Norman’s house at the start of the break-in; glimmers of that kind of complicated choreography and camerawork emerge elsewhere, but this sequence is the highlight. And with his shock of white hair and sinewy frame, Lang always provides a formidable presence, achieving an air of menace through little more than growls and his physical steeliness.

“Don’t Breathe 2” takes place eight years after the events of the first movie—which actually puts it in the near future, if you’re keeping track. A house fire left a little girl orphaned and alone in the middle of the street; Norman scooped her up, took her home and has raised her as his own daughter. He also named her Phoenix, which is only slightly on the nose. Meanwhile, the Rottweiler that follows her everywhere and protects her is named Shadow, and the movie actually finds a way to get even less subtle from there. Norman has kept her cloistered in their dilapidated Detroit home, but now that Phoenix is a tween (played by Madelyn Grace), she yearns desperately to have a normal life, make friends and attend school. On one of her weekly field trips to run errands with a trusted friend, we see why the outside world is such a dangerous place.

(Along those lines, it’s difficult to determine whether this is the best or worst possible time to release a movie called “Don’t Breathe 2” about people who stay inside their house all day; the fact that it’s only playing in theaters indicates that the studio hopes you’ll be willing to leave yours.)

When a group of idiot tweakers follow Phoenix back home, led by a scuzzy Brendan Sexton III, we eventually discover what they’re really doing there. The resulting twists go from intriguing to insane, but they do change everything, turning a pretty standard home-invasion thriller into something wilder and weirder and—at times—darkly funny. Sayagues’ understated use of silence, creaking doors, and plodding footsteps in the film’s first half gives way to gruesome, bloody violence and vivid sound design as Norman fights off and outsmarts his attackers. Through it all, Grace meets the physical demands of her role, but there’s not much to her character otherwise. Phoenix is constantly reacting, either using the survival tools her “father” taught her or taking in new information about her true identity. Meanwhile, subplots about an organ trafficking ring and a nearby children’s shelter feel wedged-in awkwardly.

But the most daring feat of all in “Don’t Breathe 2” is its attempt to completely rehabilitate Norman. It’s admirable and even unusual that a studio movie would offer such moral ambiguity in its horror hero—and that’s definitely what he is here, comparatively—but the cause for his torment lingers until the end. There’s a queasiness that’s inescapable, despite his good-hearted efforts now and the obvious love for dogs that serves as a shorthand for his redemption. It’s to Lang’s credit that we’re willing to follow him on his unexpected journey and actually care about whether he can continue kicking ass away from the familiar confines of home. He remains superhuman, despite his deeply flawed humanity. 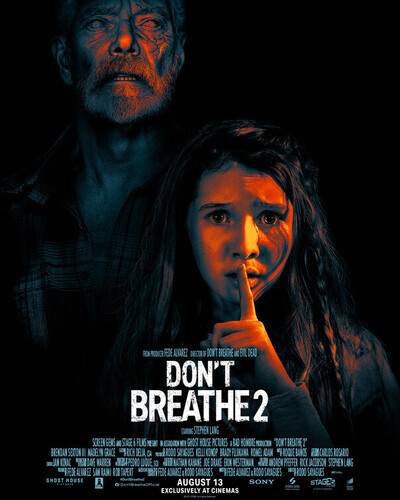