If he thought about it, Briggs (Channing Tatum) might believe that the injuries from his service as an Army Ranger have taken everything he had and everything he needed. But he does not think about it. Despite his doctor’s warnings that he has some permanent impairment, he's determined to get back into the Rangers. Service gives him structure, purpose, fellowship, and enough adrenaline to not have to think about the many things he doesn't want to think about, including how much more there is still to lose.

Briggs needs sign-off from an officer to be readmitted to the Rangers, who call themselves “the Army's premier direct-action raid force.” He has been repeatedly turned down. Finally, an officer says he will authorize Briggs’ reinstatement if he will perform one task, delivering an Army dog to the funeral of a veteran who served with Briggs. The dog is Lulu, a sweet-faced Belgian Malinois who performed many brave rescue operations, but who now is so severely traumatized from being in a war zone that no one can go near her. She has sent three people to the emergency room and been deemed un-salvageable. Until the funeral, she is muzzled and on Prozac. After the funeral, she is scheduled to be put down.

Briggs, who has said he would do anything to get back into the service, does not want to do this. “You’re asking me to take a dog on a plane to Arizona?” The officer responds, “I’m asking you to drive a Ranger to a funeral.” The dog is too unstable to fly; indeed, Briggs is warned not to let her near any person or animal. But if Briggs can deliver Lulu with no mistakes and no trouble, he can get the approval he needs.

Of course, there will be mistakes and there will be trouble on the road from Oregon to Arizona by way of Los Angeles. There will also be connections from the past, both in person and via an extensive, heartfelt, and very detailed notebook kept by Lulu’s Ranger handler.

Tatum the actor responds exceptionally well to Tatum the co-director (along with co-screenwriter Reid Carolin, both directing a feature for the first time). In his previous films, Tatum has mostly relied on his natural all-American charm, a boy-we’d-like-to-have-next-door combination of confident strength and self-deprecating humor. We have seen him unhappy and under stress but almost always as a character who keeps those feelings hidden. Here we see his range, with more vulnerability than he has shown on screen before. Briggs tries his utmost to hide his struggle from everyone, including himself. But Tatum lets us see it, without consideration for movie star vanity.

Carolin and Tatum play it safe in some other choices, though, with too many sun flares and postcard-pretty shots of the beautiful western countryside and some on-the-nose song selections for the soundtrack. We do not need to hear Kenny Rogers singing “The Gambler” again; when it comes to that song, it is time to fold ‘em. One of the stops on the road trip is in Portland, and the tired jokes about too-twee Portlandia-ness and Briggs’ efforts to adapt in order to get laid wear thin fast.

What we’re there to see is two wounded warriors, one human, one canine, heal each other, and that works well. There are some surprising detours along the way, with some characters more interesting than the crunchy Portlandians. The always-welcome Jane Adams brings her delicate sensibility to a character who could easily have been caricatured. Interactions with two other vets also benefit from thoughtful performances.

Both Briggs and Lulu learn that the skills they relied on in the military might need to be un-learned, or at least kept in check. Lulu knocks down a man in a hotel lobby only because he is wearing Middle Eastern robes. Briggs learns that perhaps you don’t enter someone’s property the way you enter enemy territory, even if you think your dog might be there. They also learn that those skills can have some value in a civilian life, as long as Briggs and Lulu learn to think differently about what they are trying to accomplish with them.

“Dog” is uneven in tone and quality but shows promise in the way Tatum and Carolin approach the story with care and heart. It leaves us optimistic for the future ahead for the wounded warriors and for the people who told their story. 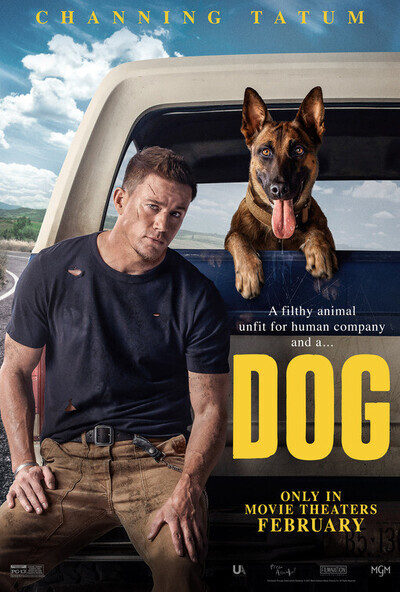