“Disturbing Behavior” is a small-town horror movie with an ironic flip-flop: This time, a sinister local cult takes rebels and delinquents and turns them into clean-cut models of deportment. “You still think this is about blood drives and bake sales?” one of the kids whispers fearfully, as they eavesdrop on a secret meeting where citizens are planning bake sales and blood drives.

The kid is named Gavin, and he's the whistle-blower, the one kid in school who knows what's going on. In the movie's best scene, he gives Steve, the newcomer, a guided tour of the various factions in the lunchroom: the dopers, the brains, the car crowd ... and the Blue Ribbons, who wear letter jackets and have trim haircuts and always exhibit exemplary behavior.

It's the Blue Ribbons who are the dangerous ones, Gavin knows. Smoking some weed in the forest by the hydroelectric plant, he witnessed one of them break a girl's neck and shoot a cop--and then saw the cop's partner let the killer go. From his vantage point, Gavin was unable to see the evil red glow in the killer kid's eyes, but obviously, these are dangerous people.

The cult members hate all forms of rebellion. The reason the girl had to die was that she had a tattoo. “Self-mutilation,” says her killer, who refuses sex because he has to “conserve his fluids” for the big game, and later utters the very worst line in the movie: “Self-mutilate this, fluid girl!” Gavin is played by Nick Stahl. James Marsden is Steve, the newcomer, and Katie Holmes (from “Dawson's Creek”) is Rachel, who dresses in black and likes to strike poses on the beds of pickup trucks and is a bad girl who is in great danger of becoming a very good one. Meanwhile, down in the school basement, the janitor (William Sadler) has what Gavin describes as “the village idiot, Quasimodo thing going.” But is the janitor quite what he seems? Teenage horror movies are a popular genre after “Scream” and “Scream 2,” but I doubt this one has similar success. It's too murky and disorganized. The director, David Nutter, has done some “X-Files” episodes, and is great at suggesting conspiracies but not so good at payoffs. It's like he wants to postpone the answers until the end of the season.

But we catch on fairly quickly that this is, as the advance buzz has it, a teenage version of “The Stepford Wives.” The Blue Ribbons, with their Weekend Enlightenment Seminars, are, as Gavin says, “hypnotized, lobotomized and brainwashed.” And there's the obligatory element of scheming parents, who double-cross their kids: They'd rather have a polite zombie than a sullen rebel.

Unlike “Scream 2,” which kids the horror cliches, “Disturbing Behavior” pretends they still hold power. But the movie is light on shocks and not ever scary. It does, however, find a great way to illustrate Pink Floyd's immortal line, “Hey! Teacher! Leave those kids alone!” 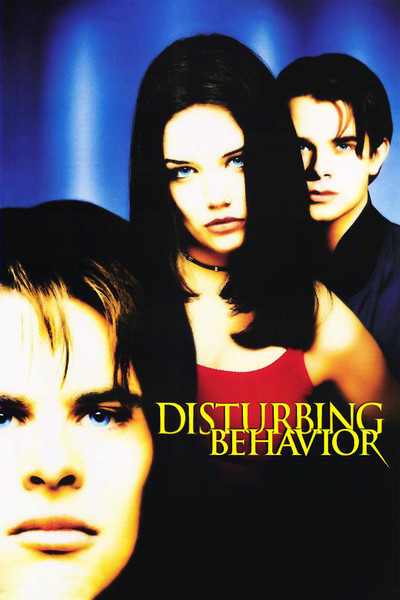