In 2007's “Enchanted,” the clash between the naiveté and eternal optimism of classic Disney-ified animated fairytales and the cynical real world of Manhattan felt fresh and invigorating. Amy Adams' committed performance as Giselle, a Disney princess personified, catapulted her into mainstream success. But as Disney's IP continues to saturate the market, it's fitting that their latest direct-to-streaming dip back into this magical well is entitled “Disenchanted.”

Directed by Adam Shankman, the story is set about a decade after the events depicted in the first film. Giselle and high-powered Manhattan lawyer Robert (Patrick Dempsey) have married, had a baby named Sofia, and wide-eyed little Morgan (Gabriella Baldacchino, taking over the role from Rachel Covey) has become a stereotypical surly teen. We barely see the baby despite her existence being an impetus for the family to flee cramped Manhattan for the comfort of the suburbs, and it's symptomatic of just how underdeveloped pretty much all the new characters are in the film.

Of course, suburbia isn’t immediately the “after happily ever after” of their dreams. Although they’ve moved into a beautiful, pink, two-story home complete with a castle-like spire that many would consider dream home goals, the “fixer-upper” is disparaged by just about everyone, from Morgan to the PTA queen bee of Monroeville, Malvina Monroe (Maya Rudolph), and even the King and Queen of Andalasia (James Marsden and Idina Menzel, reprising their roles). The script (which has four credited writers) doesn’t explore their adjustment period, though it does give Giselle and Morgan plenty of time to bicker.

As a teen, Morgan doesn’t have time for Giselle or the magical memories of her childhood. Giselle laments she doesn’t “sing the right song anymore.” After a fight with Morgan ends with her angrily telling Giselle she’s only her “stepmother,” Giselle makes a desperate wish on a magic wishing wand (a house-warming present from Andalasia) for them to have a “fairytale life.” The song here is wonderfully bittersweet, with Adams bringing a tinge of sorrow to her shining voice.

But stepmothers are always wicked in fairytales, and so this wish naturally becomes a curse, slowly turning the town into Monrolasia (clearly inspired by Belle’s village from “Beauty and the Beast”) and Giselle’s goodness into evil. As she becomes aware of the fairytale cracking veneer, Morgan discovers she has until the final stroke of midnight to undo everything.

While the script is heavy on action, it's incredibly light on any kind of real characterization. Malvina is a stock suburban queen bee, with Rudolph responding by playing her less as a wholly realized character than as Evil Maya Rudolph. Adams has fun with Giselle’s descent, altering her sweet lilt to a deep poisonous tongue. The two get a few showdowns, and one zippy duet entitled “Badder,” but the tension is nowhere near as delicious as what Adams crafted with Susan Sarandon’s big bad in the first film.

Longtime collaborators Alan Menken and Stephen Schwartz know the formula for the perfect Disney song, having nabbed three Oscar nominations for their work on “Enchanted.” Here each song serves its purpose for the narrative, but there is nary a catchy earworm. There is one showstopper, performed by Menzel, who did not sing in the previous film. Her song “Love Power” may have a woefully generic name, but her voice is as powerful and spine-tinglingly beautiful as ever.

Menzel’s performance is one of the few that manages to transcend beyond the subpar trappings of "Disenchanted," which soars when she and Marsden (just as charming and dimwitted as ever) grace the screen. It’s unfortunate, then, that they’re relegated to only a handful of scenes towards the beginning and during the final act. The parody homage to Andalasia and its inhabitants remains the strongest element of its world-building.

Monroeville is never built out beyond a few minutes in a high school hallway, the commuter train station platform, and one coffee shop. What does this film have to say about those who leave the city for the suburbs or those who live in them? If the idea is that it’s not the “closest thing to a fairytale” after all, then we need to see more of what it is before it becomes part of Giselle’s accidental curse. We need to meet more than just Malvina and her cronies (Yvette Nicole Brown and Jayma Mays), a few mean girls whose names we never hear, and Malvina’s generic jock son Tyson (Kolton Stewart). The setting also never fully meshes with the film’s exploration of the power of memory.

Although it's gorgeous to look at (especially Joan Bergin’s costumes), “Disenchanted” fails to truly rekindle the magic or the biting wit of its predecessor. Like most things stamped Disney these days, the film feels just like the mass-produced bobbles for sale at the Disney store. There may be a little bit of recognizable magic left on the surface, but that’s about it. 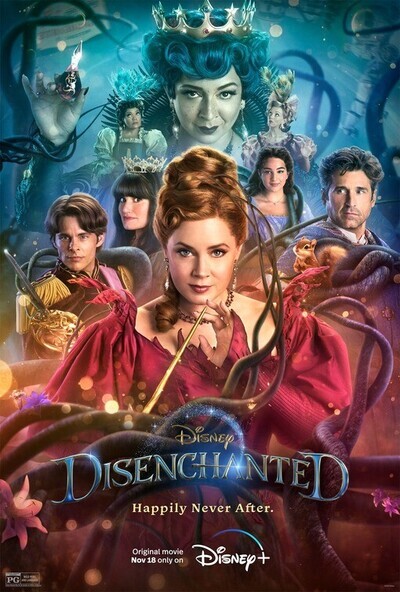