Pulpy Canadian whodunit “Disappearance at Clifton Hill” is never as fun as it should be, despite a gripping central crime, David Cronenberg playing a scuba diving podcaster, and a nearly deconstructive idea of how the truth is always just out of reach. Director Albert Shin has the various pieces to make such a noir pop like the neon lights of its central location—Niagara Falls’ tourist strip—but it’s a mystery without much intrigue.

The disappearance that “Clifton Hill” talks about happened decades ago, when Abby was a seven-year-old (played with disturbing silence by Mikayla Radan). While walking around the woods by the water, she sees a boy with an eyepatch attacked by two adults and stuffed into a car trunk. It happens just up the hill and through the weeds of where she is standing, but it’s clear enough. While her family takes a group picture minutes later, she sees the car drive away, and to the sound of Alex Sowinski and Leland Whitty's frantic woodwind and brass score, you can practically see the traumatic image being inventoried deep in her brain, primed to knock over some shelves in the rest of her psyche.

Leave it to the death of her hotel-owning mother to bring Abby (now played by Tuppence Middleton) back to Niagara Falls, and also to revisit this memory from years ago. While overseeing the family hotel in its last few weeks of ownership, Abby starts to retrace the steps of this unfinished story that her sister Laure (Hannah Gross) considered to be just one of Abby’s fantastical yarns. But it’s not long before Abby finds different pieces that guide her more and more to the event, starting with finding out the name of the boy who disappeared. When revisiting the site of disappearance, she meets Walter (David Cronenberg) who scuba dives for stuff that finds its way from the falls, and who also has a conspiracy podcast that has been talking about the events Abby has been fixated on. A visit to the library and a few conversations later, and the story even gets stranger—a VHS tape promoting a mother and father magician duo known as the Magnificent Moulins, a tiger, a suicide, a conspiracy.

While doing her own diving into the story, she encounters a guy who claims to own the town, Charlie Lake III (Eric Johnson). Plainly sleazy and pushy right off the bat, he wants to buy the Rainbow Hotel that Abby’s mother owned, and Abby wants more information about his father’s possible involvement. “Clifton Hill” has a small town quality with its tight list of characters, but the way they come together as convenient developments, as people just bumping into each other, feels to be part of the story’s slightly pulpy air. A guy named Singh (Andy McQueen) who Abby meets at a bar when she gets into town turns out to be a police officer that she has to plead to days later; her sister Laure works at a casino which later helps Abby get more information about someone who could be involved. You just go along with it, but at the same time it’s not all that cute, either.

Abby has the curiosity and action of a journalism student (or so she claims), but her gumption goes even further—with the preface of a flashed smile, she can set off on a confident lie while talking to strangers, whether or not she gets caught. When she first meets Singh, she claims to be studying the falls and fires off a grisly story about tourism; she doesn’t miss a beat, same when she tells another group of cops that she's Charles Lake's liaison, whatever that means. Shin portrays this as somewhere between a sly superpower and a psychological issue. Middleton’s performance moves between the two with more curiosity than much of what else is going in the story; she successfully creates a mystery box character out of someone that we would normally not question.

Abby is far from the only inhabitant in “Disappearance on Clifton Hill” who messes with the truth, as Shin and co-writer James Schultz populate their story with numerous people who look like crackpots unable to provide cold facts. Maybe Cronenberg’s character isn’t airtight in his conspiracy theories; maybe the defensive billionaire is hiding something when he shuts Abby's curiosity down by saying, “In case you haven’t figured out, I own this town.” The narrative gets twists from this shiftiness, but the characters are underwritten, and the movie's slippery nature (down to its final scene) feels more like a gimmick. For good measure, the two magicians even share their side of the story, but with a lie and a truth, letting Abby figure out which is which.

And yet the film's biggest problem is how it bungles such kitschy potential. The magician family is shown to be a walking kooky '80s time capsule, a UFO-inspired diner is a prominent location, and the tacky tourism of Niagara Falls looms over everything—but the movie has little discernible sense of humor. There are a few overt attempts to be funny, like when the magicians give their side of the story while demonstrating sleights of hand, but the script's bizarre impulses are muted. It’s fitting that one scene has Abby trying escape a nosy Charles via a busy sidewalk of Niagara Falls, but we don’t get a sense of the place. Before she can hide in the darkness of a nearby funhouse for too long, the lights come up, and the movie switches back to its ordinary nature instead of guiding us deeper toward a memorable weirdness. 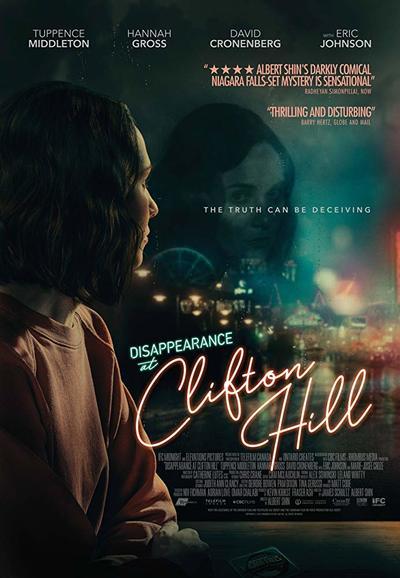