Before Alison Roman’s words about Marie Kondo and Chrissy Teigen got her in trouble, it was her famous stew—a mix of chickpeas, turmeric, coconut milk and a number of other yummy ingredients—that caught the attention of both admirers and detractors. While many saw just another recipe from the popular New York Times food columnist, others noted that the dish seemed fairly similar to curry, but rebranded or gentrified into something more palatable for a perceived general audience, stripped of its origins and served up as an Instagram-ready craze known as #TheStew. The controversy around #TheStew may have simmered down but the conversation about cultural authenticity, culinary appropriation, and Columbus-ing traditional dishes continues on, making Elizabeth Carroll’s insightful documentary “Diana Kennedy: Nothing Fancy” a much-needed perspective.

The documentary profiles Kennedy’s decades-long efforts studying, collecting, and preserving traditional Mexican cooking. Born in England with an adventurous spirit, Kennedy left home to work in the Women’s Timber Corp during World War II. Eventually, her travels took her to Haiti where she would meet her husband, New York Times correspondent Paul Kennedy. The couple relocated to Mexico City, where Kennedy’s interest in replicating the home-cooked dishes of her neighbors grew into an anthropological study of different regions, ingredients and cooking methods. She traveled the country, often by herself, collecting recipes and ingredients, noting exact measurements and cooking techniques. She built a self-sustaining home outside of the city where she also tends to an impressive garden full of peppers, flowers, fruits and vegetables. Whatever she can’t grow, she goes into town to buy from local vendors. Now in her 90s, she’s as unspoken as ever about the need to respect tradition, wholesome ingredients and living with the land.

Carroll’s film deals with the question of appropriation upfront, as it’s probably on a number of viewers’ minds as to why a British woman could call herself an expert on Mexican cooking. Kennedy does not take credit for discovering different tortilla recipes or watering down spices to make dishes more palatable. Instead, her cookbooks both named the region where the food is from and the name of the person who shared their recipe with her. How many modern-day cookbook authors would be so generous? Carroll adds in the voices of other culinary experts like Mexican chef Pati Jinich, Spanish chef José Andrés, and American chef Alice Waters to explain the importance of Kennedy’s work, changing outsiders’ limited perception of Mexican food and saving traditional recipes for future generations. The documentary also shows that Kennedy’s respect for Mexican cuisine is also reciprocated by local chefs.

Of course, no modern documentary on a subject related to food would be complete without hunger-inducing close-ups of cooking. Carroll does not hold back on loving shots of freshly squeezed lime, bubbling pots of mole, shredded bits of Oaxacan cheese for tacos, steamed yellow flowers in a pan, or the work it takes Kennedy to beat avocados into tasty lumps of fresh guacamole. The delectable scenes tie in nicely with Kennedy’s fanatical dedication to using fresh ingredients. Who wouldn’t want to cook like this if they had backyard access to such culinary riches? Despite these savory distractions, Carroll’s film never loses sight of Kennedy. It would be almost impossible to do so. She’s a prickly character, an energetic curmudgeon who wields her sharp tongue as readily as she cuts tomatoes with a knife. She will not suffer fools asking her to change recipes or vendors trying to sell her items that don’t meet her high standards. She’s an intimidating presence, even in her old cooking shows from decades ago, who seems unforgiving of mistakes.

Watching “Diana Kennedy: Nothing Fancy” made me appreciate that someone was taking authenticity seriously long before our current conversation. It also made me resent the number of times I’ve seen my family’s traditional dishes botched or appropriated, like Bon Appetit’s approximation of a Cuban mojo sauce that adds in jalapeños, an imported pepper to the island that would completely change the flavor. I thought of the first time I lifted the lid on a pot of what was supposed to be Cuban black bean soup in my college cafeteria, only to find that it was an entirely different color and consistency than what I grew up eating. Before watching “Diana Kennedy: Nothing Fancy,” I wasn’t familiar with her story, but now I’m both hungry to try the recipes she’s collected throughout Mexico, and to learn more about her work. 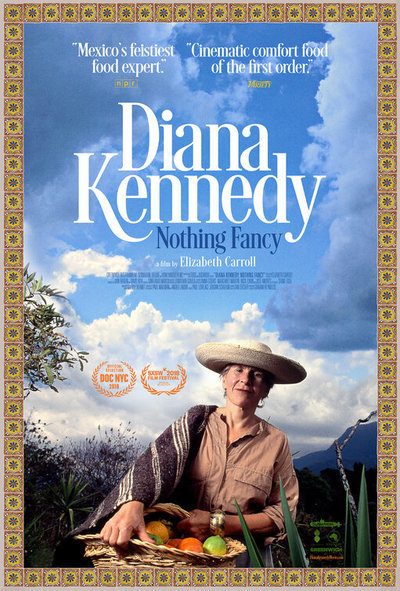