Darren Lynn Bousman’s “Death of Me” has such a fun elevator pitch that it almost makes its determination to do nothing with it all the more annoying. The pitch was probably “‘The Hangover' but make it horror.” It’s a great idea. What if not being able to remember anything from the night before didn’t lead to wacky hijinks with a baby and a tiger but down a much darker path in a strange, ominous vacation setting? Again, it’s a start. And that’s all you’ll get in “Death of Me,” a movie that takes a fresh idea and decides that the best way to present it is through tropes and clichés from better films. Imagine having an actual original idea in horror and then going back and saying, “How can I make this feel like better movies than the one I’m making?” There’s a weird belief by some filmmakers that horror fans like familiarity. They like being reminded of movies like “Rosemary’s Baby” and “The Wicker Man,” as if it’s some kind of shared language between filmmaker and viewer. However, the difference between influence/homage and pale imitation is vast, and there’s nothing about “Death of Me” that positively compares to the movies that Bousman so bizarrely replicates.

Again, it starts promisingly. Christine (Maggie Q) and Neil (Luke Hemsworth) wake up in a dirty, bloody, wrecked AirBnB on a remote Thai island. Before they can even really ask what the hell is going on, they’re in a rushed panic, trying to catch a ferry so they can go home again. It’s revealed that Neil is a travel journalist, and the two came to the island to document its culture and history. The trip to the ferry is weird enough, as is the necklace Christine wears that she’s never seen before, but they don’t make it off the island. Back in the village, they realize that Neil recorded last night on his digital camera, and they watch the footage which includes a weird drink at a bar followed by a violent incident between Neil and Christine that leads to him snapping her neck and burying her body. You thought you had a weird Friday night?

It’s a great start. First, why would Neil kill Christine? Second, how is she sitting there watching her own death? The confused pulse of the movie at this point should be disorienting and disconcerting. What’s scarier? Coming back from the dead or being alongside the person who you just watched kill you? In the first of many bad decisions, writers Ari Margolis, James Morley II, and David Tish sabotage all of this potential and dive headfirst into “scary island locals” horror. Instead of playing with the recording that gives the film its damn title, “Death of Me” becomes so much like other cult island movies that Neil literally asks Christine how “The Wicker Man” ends.

From here, “Death of Me” meanders from one vaguely xenophobic set piece to another, pushing Christine from one hallucinatory vision to the next in such a depressingly flat manner. When it does come to life every now and then, Bousman can’t maintain the momentum at all. There are times when the richness of the setting and the lingering goodwill of that initial concept almost brought me back into the film, but then it just repeats visuals or themes, draining them of their strength each time. It’s a movie that needs to build to a fever pitch of hallucinatory insanity but just trudges along to something that feels inevitable instead of interesting. We feel as stuck as Christine and Neil, baffled by a situation with no internal logic or narrative cohesion. The title may refer to what Christine watches on that recording, but it’s also reflects how much I felt my interest in this project fade with each passing minute until it was absolutely dead. 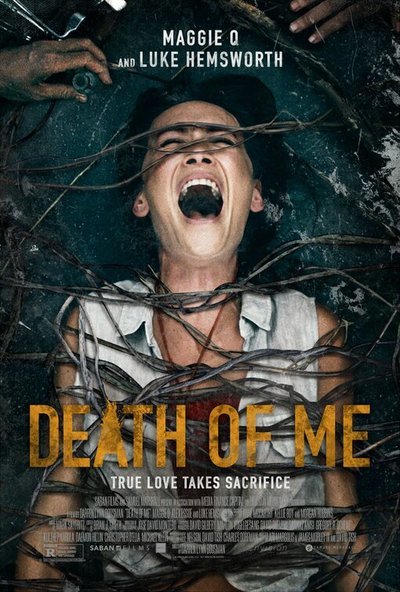 Kelly B. Jones as Kanda